The ‘Qeunelle’ gesture is the Nazi salute in disguise 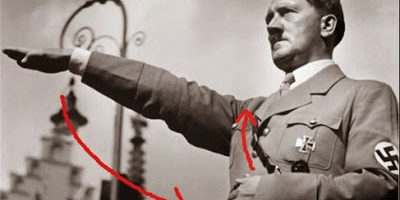 Most of us may not have heard of it until recently if at all, but the ‘quenelle’, the name given to a gesture which is performed by pointing one arm diagonally downwards, while touching that arm’s shoulder with the opposite hand, has become an important symbol of the shift in Europe transforming the boycott Israel to a blatant and public manifestation of anti-Semitism. In the same manner that boycotting Israel has always been nothing more than anti-Semitism in disguise; the ‘Qeunelle’ gesture is nothing more than a Nazi salute in disguise. Comedians, media figures, sport stars, and an ever increasing potpourri of anti-Semitic wanna-be’s have been photographed doing the  ‘Qeunelle’ gesture in public, in front of camera’s without not one iota of inhibition or concern that they will be labeled anti-Semites or identifying  with Nazi ideology. The ‘Qeunelle’ salute which is what it is, was created by Dieudonné M’Bala M’Bala, an anti-Semitic French comedian in 2009, and has since taken off like a run-a-way train. Let there be no doubt, the salute that he invented is the exact reverse of a Nazi salute in shape and form and is intended to represent anti-Semitism in its most virulent form, that is; ‘redemptive anti-Semitism’, a form of anti-Semitism adopted by the Nazi ideology that believes that by ridding the world of Jews, humanity will be liberated and redeemed. By the way,  as the ‘Qeunelle’ salute has become the latest rage in Europe, America is not immune since it has also spread to the U.S. by NBA basketball star Tony Parker, who has been accused of making the ‘Qeunelle’ salute and thus mainstreaming anti-Semitic hate. Parker was photographed doing the ‘Qeunelle’ salute. He has since apologized.

While much has been written in the past week concerning the “qeunelle,” it’s social implications and how it represents a loosely defined symbol of being an act of anti-establishment, the inability of Europe’s leaders and public opinion makers, or even bloggers to acknowledge the risk associated with the ‘Qeunelle’ salute only condones and legitimizes this behavior. The “quenelle” and those adopting, promoting, and exhibiting this salute are in fact reminiscent of the brown shirts who paraded in the streets of Munich in the early 1920s. True, they directed their attacks against a weakened German State, and a crippled economy, but the thrust of their rage was against the local and the international Jew, which for them represented the source of all evils.

A brief search on the internet provides the location of a number of photographed quenelle salutes in front of prominent Holocaust landmarks and Jewish institutions further suggesting the prejudicial nature of the ‘quenelle’ salute. Individuals have been photographed performing the salute at the Auschwitz extermination camp in Poland, and French essayist and film-maker Alain Soral performed a quenelle in front of the Holocaust Memorial in Berlin. He justified itself in a video by declaring, “You the Zionists who using the Holocaust to terrorize us and to prevent us from criticizing a neo Nazi state that is the state of current Israel, this manipulation does not work anymore, that’s what it means”. In September 2013, two French soldiers on duty had their picture taken in front of a Paris synagogue doing a quenelle salute. A man wearing a shirt featuring a portrait of Yasser Arafat was photographed performing a quenelle in front of a Jewish school in Toulouse, where in March 2012 a rabbi and three children were gunned down in cold blood by a French Muslim terrorist.

The ‘quenelle’ salute as legitimate behavior is the result of a gradual process over the past decade whereby the enemies of Israel have blurred any differentiation between anti-Israel, anti-Zionism, and anti-Semitism.  These new anti-Semites do not publicly proclaim their desire to bring about a second Holocaust or to subject the Jews to mass murder or annihilation. The hatred is aimed against the state of Israel, which, according to the new anti-Semites, represents all that is evil in the world and which is the main violator of human rights and guilty of virtually every other abuse that can be conceived. Those on the extreme left call for the abolition of the State of Israel outright, although they do not tell us what they propose to do with the seven million Israeli Jews. This process has included a fair number of Jewish leaders who have claimed to be supporters of Israel yet have facilitated the gradual process of legitimizing the hatred of Israel by making it OK to question Israel’s right to exist, to label Israel as an apartheid state, and to support claims that Israel is waging a Holocaust on the Arab minority in Israel. All lies, yet all have become daily accusations blurring the distinction between anti-Israel and anti-Jew.

The ‘quenelle’ salute is being used by individuals to fly under the radar of strict anti-hate speech laws in Europe and the United States making it politically correct and palatable to the Western ear to express hatred of Israel and hatred of Jews wherever they may be. The viciousness, volume and consistency of this message will only strengthen the process similar to what the Nazi propaganda did by dehumanizing the Jews creating fertile ground that will consent to the destruction of world Jewry.

The writer, a 25-year veteran of the I.D.F., served as a field mental health officer. Prior to retiring in 2005, served as the Commander of the Central Psychiatric Military Clinic for Reserve Soldiers at Tel-Hashomer. Since retiring from active duty, he provides consultancy services to NGO’s implementing Psycho trauma and Psycho education programs to communities in the North and South of Israel. Today, Ron is a strategic advisor to the Office of the Chief Foreign Envoy of Judea and Samaria.          To contact: medconf@netvision.net.il

Holding Hostage the Memory of the Jewish Dead
January 27, 2020