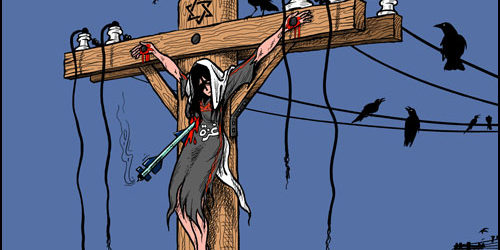 How uncommonly useful it often is to couple a great figure to some dark vendetta. And nothing could be simpler. All it takes is for the figure to be dead, because you don’t want it protesting the rude liberty you have taken with its name. Hardly was Nelson Mandela cold in his grave when media elements hoicked the great figure onto their bandwagon of choice.

Before Mandela there was Jesus. What bandwagon or vendetta has not taken liberties with Jesus, so that two thousand years later he cuts a refined European image quite divorced from the kosher ‘Yid’ of Galilee and Judaea.

Today Jesus cuts a more contemporary figure. He, like Nelson Mandela, has been refashioned into a grievance leader no less. Now you don’t spare your trump card for any grievance that happens along; you keep it for a cause célèbre. You hold the Nelson Mandela name in reserve for grand posturing. You bring it out to attack a people who universally offend by their chutzpah of existing. Israel’s antagonists value Nelson Mandela dead more than they valued him alive because it frees them to take liberties with his name.

But compared to the Son of God what is the Mandela brand. Nor do you have to be a liberal, or even Christian, to couple him to your special vendetta. The Palestine Liberation Organization is not a liberal or a Christian body, yet we’ll see that the PLO has borrowed Jesus. Alumni of Bethlehem Bible College, other borrowers of Jesus, are Christian, as are attendees of annual Christ at the (Israeli) Checkpoint Conference.

Out of Palestine shall go forth the Law, and He shall rebuke the Israeli occupiers.

Israel-hating Christians borrow the Son of God not to beat swords into ploughshares and spears into pruning hooks; they bring him on for more mundane acts. They want the Son of the Holy Trinity to walk through a military checkpoint in the West Bank. “How would Jesus deal with the same feelings of anger and bitterness daily experienced by Palestinian people,” asks Munther Isaac of Bethlehem Bible College.

Archbishop Emeritus Desmond Tutu, another frequent borrower of Jesus, does not ask questions but puts words in the Saviour’s mouth. “Jesus was angry that they (the Jews) could shut out other human beings.”

Just how elastic is the figure of Jesus? How far can it be stretched and remain credible? Believe it – even a little Jesus goes a long way, far enough to be a reborn Palestinian. People claim that, in all seriousness. “Jesus was a Palestinian.” Yasser Arafat’s PR woman Hannan Ashrawi disclosed the astounding fact to the Washington Jewish Week on February 22, 2001, and it did not even make headlines. Ashrawi was not the first, nor the last, to bring the Son of God into the Palestinian fold.

“Every Christmas, Palestine celebrates the birth of one of its own, Jesus Christ,” proclaimed the PLO’s statement two days before Christmas 2013.  I don’t know if anyone has made Jesus into a Muslim, but the PLO seems to leave that possibility wide open.

This molding the hero of the New Testament into a Palestinian helps two objectives. First, it makes that people’s record quite a bit longer than it really is. From 20th century origin (1968 seems to be the year the Palestinian people were introduced to the world) the new Jesus figure takes them way back to the 1st century. Second, millions who love and worship Jesus, as they love and worship Nelson Mandela, will reflexively hate Israelis.

One might safely wager that not too many of those millions will stop to ponder the absurdity and warped chronology of a Palestinian Christ. For one thing, how to hook up the idea to the gospel narrative of the Jewish couple, Joseph and his pregnant wife Mary? For another, how to explain Jesus celebrating the Passover festival – his Last Supper? And what of the awkward fact that nowhere does the name ‘Palestine’ crop up in the Gospels, which do refer to ‘Judaea’, meaning the land of the Jews.

Then there is the hopeless entanglement that Jesus – converters weave for themselves when they follow the star to Bethlehem, where lies the Palestinian victim in its cradle. After all, if the Zionist-Jews are colonial occupiers and new-found usurpers of Arab land, how could they oppress and persecute Palestinians in the way they did Christ two thousand years back?
“It seems to many of us that Jesus is on the cross again with thousands of crucified Palestinians around him. … The Israeli government’s crucifixion system is operating daily.” Thus spoke Naim Ateek, a Palestinian cleric, in fine biblical sweep.

These, are they not, difficult problems to explain away. But there are people brave enough to give it a try. Mitri Raheb is one such brave contortionist of old records. A pastor of the Evangelical Lutheran Christmas Church in Bethlehem, he denies a connection between modern and Bible Jews: “I’m sure if we were to do a DNA test between David, Jesus and I Mitri, born just across the street from where Jesus was born…the DNA will show that there is a trace. While, if you put King David, Jesus and Netanyahu together you will get nothing, because Netanyahu comes from an East European tribe who converted to Judaism in the Middle Ages.”

Raheb is nothing if not ingenious. Still, he leaves behind the biggest problem of all. If Palestinians do “celebrate the birth of one of their own, Jesus Christ” then how come they’ve nearly purged Palestine of Christianity?

“As dhimmis Christians living in Palestinian-controlled territories are subject to debilitating legal, political, cultural, and religious restrictions. Muslim groups like Hamas and Islamic Jihad have built a culture of hatred upon the age-old foundations of Islamic society. Moreover, the PA has adopted Islamic law into its draft constitution. In such an environment Christian Arabs have found themselves victims of prejudice and hate crimes. Tens of thousands of Palestinian Christians have left their ancestral homes and emigrated. They flee to almost any country that will issue them a visa… Seventy percent of Christian Arabs who once resided in the PA administered areas now live abroad.”

So writes Justus Weiner, an American lawyer and authority on Palestinian Christians. He goes on to explain that Yasser Arafat formed the policy that led to this demographic shift. Arafat, says Weiner, also defied tradition by appointing a Muslim governor of Bethlehem and engineered a takeover of the City Council by Muslims. Arafat then crowned his efforts when he converted the Greek Orthodox monastery next to the Church of Nativity into his official Bethlehem residence.

One of the few Arab Christians who has dared to break the silence is Pastor Reverend Naim Khoury of the Bethlehem Baptist Church. At the risk of his life he notes that animosity towards the Christian minority in areas controlled by the PA has worsened and that, “people are always telling Christians, convert to Islam.” Khoury may have lived to tell the tale, but he moved Palestinian leaders to close down his Bethlehem church.

Then there is Gaza. Since the Hamas takeover in 2007, half the Christian community has fled. Christmas decorations and public displays of crucifixes are forbidden, and in a December 2010 broadcast, Hamas leaders exhorted Muslims to slaughter their Christian neighbors. This led to the murder of Rami Ayad, owner of Gaza’s only Christian bookstore, before his business was burnt to the ground.

Considering it all, one heretical fact stands out: that in all the vast Middle East Christian numbers and freedoms have flourished, dramatically, in one tiny haven – in the land where Jesus’ own people still live, after giving much of their land away – in Israel.