Are Bethlehem’s Christians losing grip on the city? 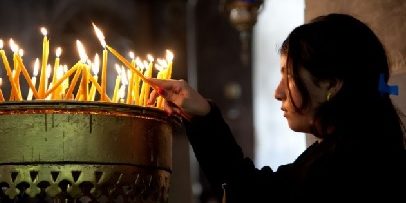 By DEBRA KAMIN, TIMES OF ISRAEL—

It’s nearly Christmas, but the leader of this famed little town – the first female to ever hold the role – says that tourists are not flocking to the events in the packed calendar she and her team have prepared for the month of December. In a bid to jumpstart the city’s most lucrative season, she launched Christmas early this year, lighting the massive tree at the center of Manger Square on December 1 and unveiling a packed four weeks of music, art and cultural happenings.

But despite Bethlehem’s critical role in the story of Christmas and the life of Jesus, its shrinking Christian community this year is experiencing a rather lackluster holiday.

“Bethlehem is Christmas,” says Baboun, a former professor of literature and a member of Bethlehem’s Christian minority. “We need to work on a different manner on the presence of Christmas in Bethlehem.”

The town gave birth to both Jesus and King David, but today it is walled, economically unstable, and still licking its wounds from the staggering violence it incurred during the second Palestinian Intifada. Many of Bethlehem’s Christians feel there is little to celebrate.

Samir Qumsieh, a Christian researcher and community leader who lives in the neighboring town of Beit Sahour, says Muslim extremism is on the rise in the West Bank, and local Christian leaders remain in a stupor.

“The future of Christianity is gloomy,” he says to a gathering of journalists he has invited to his home, which is washed in shades of blue and features paintings of the crucifixion and murals from the Psalms on its walls. “We don’t have a future. The reasons are the escalations of emigration and the low rates of birth.”

Qumsieh’s pessimism is bolstered by hard numbers, which show that among the four major religion groups in Israel and the Palestinian territories – Jews, Muslims, Christians and Druze – Christian mothers register the lowest birth rate of all: just over two children per family.

“This is the Christian trend,” he says sadly. “Time runs against our faith.”

Bethlehem is part of a trio of towns, including Beit Jala and Beit Sahour, that locals refer to as “the Triangle.” Taken together, they comprise 70,000 residents, and Christians still maintain a majority. But in Bethlehem they are barely one-third of the population, their ranks having been severely depleted by the Christian exodus during the worst years of the Second Intifada.
A sign on the streets of Bethlehem (photo credit: Debra Kamin/Times of Israel)

Qumsieh, who runs a tiny Christian television station that only remains on air thanks to funding from evangelicals abroad, says that dwindling Christian numbers encourage Muslim extremism, which only furthers the population drain. For him, it’s a vicious cycle.

“Al-Qaeda is now in the West Bank,” he says. “And this will add to our problems.”

Qumsieh is a furious letter-writer and whistleblower, ticking off a list of famous dignitaries to whom he has written strongly worded notes of condemnation assailing the status of minorities in the West Bank. The creep of extremism is slow, he says, but it is palpable.

“If you take it officially, you cannot see that there is anything,” he says of the persecution of Christians. “But there are encroachments on land, and the Palestinian Authority does not take decisive action.”

To further prove his point to the gathered journalists, Qumsieh displays a number of cheap souvenirs purchases from the stalls around Bethlehem’s famed Manger Square. On one, a T-shirt showing Bethlehem’s sites, the cross on the Church of the Nativity has been erased. On another, a deflated soccer ball bearing the logo of FC Barcelona, the red cross in the left-hand corner is missing one of its bars, thus muting the symbol into an odd, sideways T.

“The discrimination is concealed,” he says, “and that makes it more dangerous.”

Baboun, however, noticeably bristles when asked about relations between Christians and Muslims in her city.

Not so, says Qumsieh, who refers to Christian leaders as “cowards,” more concerned with presenting a united Palestinian front against Israel than with facing their own internal problems.

“If somebody claims that there is no discrimination, he is a liar,” he says. “ said everything is okay. Of course. In her position she can’t say anything else.