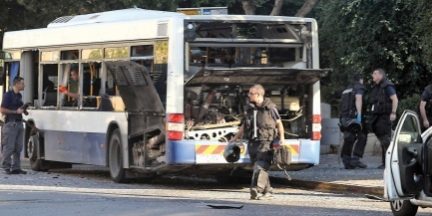 A potentially devastating terror attack was averted in the Tel Aviv suburb of Bat Yam on Sunday, thanks to the vigilance of the passengers aboard Dan bus No. 240. Several passengers noticed a suspicious bag that was left in the rear portion of the bus and alerted the driver, who immediately stopped the vehicle. The passengers disembarked from the bus, minutes before a bomb concealed in the bag exploded.

Police officials believe the explosion was a Palestinian terrorist act. It is unknown at this time whether the attack was the work of a major terror group or a lone terrorist.

No group has claimed responsibility for the attack, but Fawzi Barhoum, a spokesman for Hamas, said in a statement that the blast was a “heroic action” in response to what he called Israel’s “continued crimes against the Palestinians.”

According to a report in the Palestinian Maan news agency, an Islamic Jihad official lauded the attack, saying he hoped it “could usher the resumption of suicide attacks… a sign that the Palestinian people no longer accept that Israeli attacks continue without any real response.”

Israeli security forces have formed a joint taskforce to investigate the attack and apprehend the perpetrators, Army Radio reported Monday. Following the attack, the search for the perpetrators focused on roads in southern Israel.

Police spokesman Micky Rosenfeld said there were no civilian injuries in the blast. The explosion blew windows out of the bus and charred the sides of the vehicle.

“Based on the findings at the scene by bomb disposal experts, it was a terrorist attack,” Rosenfeld said. “We’re continuing to search the area for suspects.” He said the nature of the target and the nature of the device led authorities to determine that terrorists, not criminals, were behind the bombing.

Police Commissioner Yohanan Danino held a security assessment following the incident, and ordered to bolster police presence on the ground in all major cities and main bus stations nationwide. The police further urged the public to remain vigilant and alert security forces to any suspicious objects of individuals.

“The incident in Bat Yam proves that the threat of terror is always in the background, especially now, when is trying to advance the peace process,” Danino said.

The incident took place around 2:30 p.m. when the bus, which travels through Tel Aviv on its way from Bnei Brak to Bat Yam, was approaching a stop on Katznelson Street in Bat Yam.

David Pappo, 40, a resident of Bat Yam who was aboard the bus, noticed that a bag placed near the rear of the bus had a wire coming out of it and decided to look inside. “It nearly cost me my life but at least I helped find the bomb,” Pappo said Sunday.

Pappo said a 15-year-old passenger sitting next to him alerted him to the bag. “I didn’t think twice — I looked inside and immediately realized what it was. I shouted to the driver to stop and get people off the bus. I know it was a mistake to touch it, because it could have exploded, but at least I helped save lives.”

Bus driver Michael Yoger, 59, has been praised by authorities for reacting quickly and ensuring his passengers’ safety. “I’m no hero, I just did what needed to be done,” he said Sunday evening. “A passenger said there was a bag with wires near the rear door. I made sure that everyone was off the bus and away from it. I was the last one to get off the bus, only after I made sure all of the passengers were safe.”

President Shimon Peres later phoned Yoger and thanked him and the passenger who discovered the explosive, saying their actions saved lives.

“The nation owes you a debt of gratitude and I would like to personally congratulate you for this act of bravery,” the president said.

According to Eitan Fixman, a spokesman for the Dan bus company, there were 12 passengers on the bus when the bomb was discovered.

Foreign Minister Avigdor Lieberman denounced the attack in a post on his Facebook page, saying that it served as a reminder that the terror that threatens Israel “never rests.”

“The ‘quiet periods’ that we enjoy are the result of the important preemptive measures and work done all the time by the security services, and not because the terrorists have taken a time out because of the diplomatic negotiations or any other reason,” Lieberman wrote.

Meanwhile, three other security incidents took place on Sunday. A rocket fired from northern Gaza Strip late Sunday night exploded on a road in the Ashkelon region, causing no harm. Warning sirens sounded in the area before the explosion. Police sappers canvassed the area in the early hours of Monday morning and found the rocket’s remnants.

The second incident took place at the Mishor Adumim junction near Jerusalem, around noon Sunday, when three Palestinians attempted to attack policemen stationed at the junction’s checkpoint.

The three arrived at the checkpoint in a taxi and exited the vehicle. The policemen noticed that one of the men approaching them had drawn a knife and proceeded to restrain him. The three were arrested and turned over to security forces for questioning.

In another incident, boulders that were placed on train tracks running between the southern cities of Dimona and Beersheba caused a minor accident, which left no injuries but damaged a train engine. Israel Railways suspended all train traffic in the area for a few hours following the incident, to ensure the tracks’ safety.

The Beersheba police have launched an investigation into the incident. A police source said that several leads were being investigated, including the possibility of a nationalistically motivated attack.