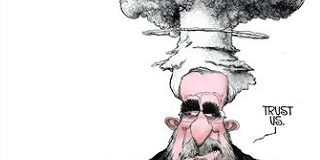 The latest CNN poll released on November 23 showed that 53% of American voters said President Obama was not honest and trustworthy. Similarly, US allies like Israel and the Persian Gulf states are questioning Obama’s integrity after discovering that for the last three years he has been lying and deceiving them by keeping them in the dark about his secret efforts to realign the US with the Iranian-led axis of evil.

When he visited Israel for the first time in March as president, he reassured the Israelis that there was “no daylight between the US and Israel” and that he had “Israel’s back,” but in reality his administration has held secret negotiations for the last three years in Oman with Iran without Israel’s knowledge.

The Iranian and American contacts have included a series of US-Iran prisoner releases beginning as early as September 2010. Prime Minister Netanyahu was first informed about these negotiations when he visited the White House on September 30, 2013. But it seems he was misled in that visit as to how close a deal was to fruition, and how bad the deal would be for Israel and beneficial to Iran.

Obama treated Israel like Chamberlain treated Czechoslovakia during his meeting with Hitler in 1938. He discussed an issue with Iran which strongly impacts Israel’s survival without informing, consulting with, or taking into consideration its concerns.

In September, Barack Obama said in his speech to the UN General Assembly that the US was determined to prevent Iran from developing a nuclear weapon. But in reality, the US has already conceded in the Geneva agreement that Iran is going to end up with the right to enrich and after the permanent agreement expires in a few years Iran will be able to run as many centrifuges as it chooses without international monitoring.

The text of the interim agreement states that a permanent final deal will “involve a mutually defined enrichment program with mutually agreed parameters” and “will have a specified long term duration to be agreed upon” for nuclear monitoring.

Moreover, in his UN speech the American president stated that the US insisted that “the Iranian government meet its responsibilities under the Nuclear Non Proliferation Treaty and UN Security Council resolutions,” but in reality all the UN resolutions and International Atomic Energy Agency directives called for the complete halt of the uranium enrichment and unconditional compliance with nuclear inspections, not for freezing it or slowing it down.

In September, Obama announced in his UN speech that he had directed John Kerry to pursue a diplomatic solution with the Iranian government because of the results of the Iranian election in May of this year that elected “moderate” President Rohani. But in reality, Obama started the negotiations while Ahmadinejad, who denied the Holocaust and was committed to “wiping Israel off the map,” was still the president. Absurdly, Khamenei, who has called Israel a “cancerous tumor which must be uprooted from the region,” has been the ultimate and only authority in Iran controlling both presidents.

Obama further told us that Israel and the US agree on the same goal concerning Iran, but in reality the US decided on a different strategic goal than Israel and its Persian Gulf allies. The Geneva deal makes it clear what policy Obama has long been pursuing in the Middle East since his 2008 election. Obama is seeking not the dismantling of Iran’s nuclear program but a strategic realignment in the Middle East with the goal of upgrading Iran as a US ally while downgrading Israel and Saudi Arabia.

It seems every move Obama has made in the last few months has been calculated to keep the Iranians at the negotiating table. He made the decision not to attack Assad for murdering his own people with chemical weapons, not because of the anti-war sentiments of Congress and the American public, as he claimed, but because he feared that targeting an Iranian proxy might anger his negotiating partner.

Furthermore, he never intended to attack Assad but needed to play the game to save face internationally after setting his own red line.

For the last two years, he has exaggerated the power of al-Qaeda elements in Syria rebel units in order to renege on his promise to his traditional Sunni allies like Saudi Arabia to assist the rebels with weapons in an effort to placate Iran by not helping to topple Assad.

But much worse, after every military strike on convoys carrying strategic weapons from Syria to Hezbollah, Obama has leaked to the press that Israel was responsible for it. Again, Obama decided to leak the information to show Iran that he can betray Israel’s confidences with total disregard to the fact that such information might have compelled Assad and Hezbollah to retaliate.

Despite the fact that the day before the negotiations resumed in Geneva Khamenei called Israel a “rabid dog” that must be “annihilated,” the Obama administration refused to condemn Khamenei and rushed on to conclude the deal.

Now, at last, we can understand why Obama, as the newly elected leader of the free world, ignored the crying pleas for American support from millions of Iranian protesters during the 2009 mass demonstrations following the country’s stolen presidential election.

It seems that normalizing relations with radical Muslim Iran has long been a top foreign policy goal for Obama, even if Israel and its other Sunni allies will have to be sacrificed in the process.