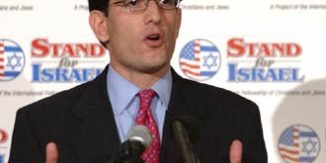 Republicans in the U.S. House of Representatives are deliberating how to act on their concerns about a multilateral nuclear accord reached with Iran last month, several GOP House lawmakers told The Hill newspaper for a Wednesday report.

Potential moves under consideration include a stepped-up push for Senate action to pass new Iran penalties, as well as a possible campaign for House lawmakers to formally denounce the deal. Many congressional Republicans have voiced strong reservations about the arrangement, which calls for the five permanent U.N. Security Council member nations and Germany to scale back economic pressure on the Middle Eastern nation while negotiators pursue longer-term restrictions on Iranian atomic activities development of a nuclear-arms capacity.

The House in July gave strong bipartisan approval to one sanctions proposal, but House lawmakers and their Senate counterparts are now mulling how new penalties might be tailored to complement the six-month interim accord.

House Majority Leader Eric Cantor is now trying to assemble Democratic and GOP support for a bill that would limit the terms of the final deal, with the Virginia Republican inclined toward a ban on any uranium enrichment by Iran, Capitol Hill aides told National Journal.

Lawmakers in that chamber are scheduled to wrap up their 2013 legislative session next week, and it was not immediately certain when GOP members might attempt to pass legislation expressing opposition to the deal.

The House Foreign Affairs Committee is scheduled on Dec. 10 to hear testimony on the accord from U.S. Secretary of State John Kerry. On Wednesday, the top U.S. diplomat joined EU foreign policy chief Catherine Ashton for discussions that he described as focusing on efforts to lock down a broader atomic agreement with Tehran.

The White House on Tuesday stressed its opposition to any new legislative sanctions, including a Senate proposal for penalties that would take effect only if an Iran deal does not take shape along certain parameters within six months.

“If we pass sanctions now, even with a deferred trigger, which has been discussed, the Iranians and likely our international partners will see us as having negotiated in bad faith,” spokesman Jay Carney told reporters.

Tehran on Tuesday indicated in a preliminary planning document that it does not expect its petroleum sales to significantly rebound next year, Reuters reported. The interim nuclear accord could provide limited help to Iran’s oil sector by easing some insurance restrictions, but it leaves in place key penalties that have reduced the nation’s petroleum exports by more than half.