Israel, the Pilgrims and the Maccabees 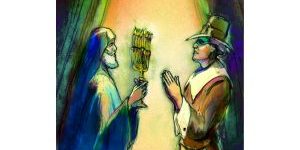 Israel, he said, “will not be Czechoslovakia.”

Sharon was sharply rebuked not only by the White House, but by leading American supporters of Israel. They attacked him for daring to make the comparison. In time, with the US invasion of Afghanistan and Iraq, Sharon’s warning was largely forgotten.

The question of whether George W. Bush sought to appease the Arabs and Iran at Israel’s expense is an open one. Strong arguments can be made on both sides of the issue. On the one hand, Bush took the fight to terror supporting regimes.

On the other hand, Bush refused to face the threat of Iran. And he forced Israel to remain trapped in the two-state paradigm which requires it to make unreciprocated concessions to Palestinian terrorists working towards its destruction.

While Bush’s legacy remains uncertain, what is absolutely certain is that his successor Barack Obama is seeking to appease the Iranians and other Islamist forces at Israel’s expense. The appeasement Sharon accused Bush of contemplating has become the official policy of the US government under Obama.

In the haze of accusations and counteraccusations by opponents and supporters of Obama’s new pact with the mullahs of Tehran, it bears recalling that the problem with the Munich pact was not the agreement in and of itself. If Adolf Hitler had been a credible actor, then the agreement might have made sense.

But Hitler was not a credible actor.

The problem with the Munich pact was that it empowered Hitler and so paved the way for the German invasion of Poland a year later.

That invasion, in turn paved the way for the Holocaust, and for the death of 60 million people in World War II.

Those, like Winston Churchill and Zev Jabotinsky who foresaw these events, were castigated as extremists and warmongers. Those who ignored their warning were celebrated as peacemakers who boldly chose peace over war.

So too today, Israel is castigated by Obama and his supporters in Washington, Europe and the media as a warmonger for realistically foreseeing the consequences of last weekend’s nuclear deal with Iran. Even worse, they are portraying Israel as a rogue state that will be subject to punishment if it dares to militarily strike Iran’s nuclear installations. In other words, rather than threatening Iran – the leading state sponsor of terrorism, led by a regime that is pursuing an illicit nuclear weapons program while threatening Israel with annihilation – with military strikes if it refuses to cease and desist from building nuclear weapons, the world powers are threatening Israel.

BRITAIN WARNED ISRAEL
British Foreign Minister William Hague made this projection of Iranian criminality onto its intended victim the explicit policy of the world powers on Monday during his appearance before the British Parliament.

Promising that Britain will be “on its guard” to prevent any state from threatening the agreement with Iran, Hague said, “We would discourage anybody in the world, including Israel, from taking any steps that would undermine this agreement and we will make that very clear to all concerned.” In other words, as Hague, Obama and Secretary of State John Kerry see things, Iran needs to be protected from Israel.

The agreement that Britain and the US heroically defend from the threat of Israeli aggression guarantees that Iran will develop nuclear weapons. Like the Munich Pact’s empowerment of Hitler 75 years ago, the Geneva agreement’s empowerment of Iran’s ayatollahs guarantees that the world will descend into an unspeakable conflagration. And this is far from the only step that they are taking to weaken Israel.

For its part, the Obama administration is expected to massively increase its pressure on Israel to make concessions to the PLO that if undertaken will similarly threaten Israel’s viability militarily, legally and politically. Obama has promised that if Israel and the PLO are unable to reach an accord by January, he will present his own formulation, and seek to coerce Israel into implementing it. Given Obama’s stated positions on the Palestinian conflict with Israel, it is clear that his formulation will involve the surrender of eastern, southern and northern Jerusalem, as well as the surrender of Judea and Samaria and the forced expulsion of more than a half a million Jews from their homes to enable the surrender of these areas Jew free.

And that is not all. Obama is also expected, in the next several months to place Israel’s purported nuclear arsenal on the international chopping block. Since entering office, he has already taken steps in this direction. Now, in his rush to transform Israel into the new Iran and Iran into the new Israel, it the prospect that Obama will expose Israel’s nuclear secrets as a means to enable Iran’s completion of its nuclear weapons program cannot be disregarded.

In other words, the weekend deal with Iran is not the end of a process of attempting to enfeeble Israel. It is the beginning of that process.

The worst is still very much before us.

It is a fortuitous coincidence that this challenging era in the history of Israel – certainly the most challenging diplomatic period since the establishment of the Jewish state 65 years ago – began the week of Thanksgiving. It is even more fortuitous that in these frightening moments, the most American of festivals took place during Chanukah the most Jewish of festivals.

This is a fortuitous coincidence because if we consider the meaning of these holidays, we can understand what the basis of our actions today must be. Just as importantly, we can rest assured that those actions will lead us to safer shores.

These two festivals that have rarely if ever been celebrated at the same time are similar in key respects. Thanksgiving is not simply about a voyage of religious freedom seekers from Europe to America. The story of the Pilgrims, who weathered an impossible 65 day journey from England to Plymouth Rock in a rickety ship called the Mayflower, is not remembered simply because they landed in the New World.

The Pilgrims are celebrated for how they comported themselves upon arrival. In the three months after their initial landing, half of the Pilgrims died from disease and murder at the hands of the native tribes. Those who survived suffered from unspeakable privations. Yet in three months, they managed through their sufferings to establish the first modern democracy, and to build a settlement.

Rather than rail against their fate, or abjectly surrender to their hardships, the Pilgrims gave thanks to God for the meager tools he gave them to mount the seemingly insurmountable challenges they faced. It is for the Pilgrims’ capacity to see the blessing in their condition, and to be empowered by their cognizance of that blessing that they are remembered. Their faith grounded heroic tenacity is the reason that a small band of religious rebels formed the cultural basis for the United States of America, when it was founded 155 years later. It was that heroism that led Abraham Lincoln to declare Thanksgiving a national holiday during the darkest hour of the Civil War, when the image of the Pilgrims empowered the Union soldiers fighting for a new birth of freedom.

As for Chanukah, the Festival of Lights is a celebration of Jewish religious freedom and national liberation. The Maccabees freed the Jews from the tyranny of Greece, the world’s greatest superpower, which denied them their right to remain Jewish. The Maccabees, a small band of heroically tenacious Jews who suffered extraordinary hardship in their war against the far superior Greek forces, took strength and comfort in their faith. It was their faith in God that empowered them to face impossible odds and emerge victorious. It was their faith in God that gave them the ability to stand up not only to the Greeks, but to the Jewish elites who preached submission and appeasement as the better part of virtue, castigating them as warmongering zealots for refusing to bow before false gods.

It is this foundational faith that made the American people feel a natural kinship with the Jewish people. And it is this foundational faith that has brought the people of Israel to love America. This bond, based on the best of both people persists today, even as Obama and his fellow appeasers push America on the path their founding fathers rejected when they came to the New World. Thanksgiving and Hanukka teach us that when we rely on our faith in God, we can surmount impossible challenges.

Israel has the means – limited though they may be – to meet the extraordinary tests we face today, as the leaders of America have turned on us by turning on the shared heritage of faith and fortitude of our nations.

Both the Israelis and the Americans must take heart from this week when we commemorate the heroic heritage of free men and women.

With the providence of God, we will be the loyal children of the Maccabees, and the Pilgrims.

And we will merit their legacy.

Hanukkah in Ancient and Modern Israel: “A Great Miracle Happened There”
December 3, 2021
A Sukkot Field Guide
September 21, 2021
Between Rosh HaShanah and Yom Kippur
September 10, 2021
The Meaning of Rosh Hashanah: An In-Depth Analysis
September 7, 2021
Wishing Our Jewish Friends A Sweet New Year
September 3, 2021
Bennett to Americans: We want stability, but not two states
August 25, 2021