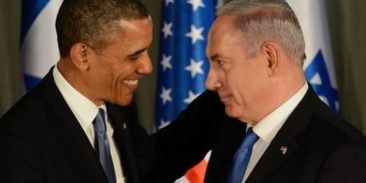 JERUSALEM — Israeli leaders denounced the agreement reached Sunday in Geneva, saying they were not bound by it and reiterating the principle that Israel would be ready to defend itself without assistance against any threat.

After weeks of intense lobbying against any deal between the world powers and Iran that does not ensure the dismantling of Iran’s nuclear program, Prime Minister Benjamin Netanyahu of Israel called the agreement “a historic mistake,” saying in remarks that were broadcast from the start of his weekly cabinet meeting, “Today the world has become a much more dangerous place because the most dangerous regime in the world has taken a significant step toward attaining the most dangerous weapon in the world.”

Mr. Netanyahu excoriated the world’s leading powers for agreeing to Iranian uranium enrichment for the first time and for relenting on sanctions “in exchange for cosmetic Iranian concessions that can be canceled in weeks.”

“Israel is not bound by this agreement,” he said. “As prime minister of Israel, I would like to make it clear: Israel will not allow Iran to develop a military nuclear capability.”

The foreign minister of Israel, Avidgor Lieberman, told Israel Radio that “Israel will have to make a reassessment” and that “all the options are on the table.”

“We are talking about the greatest diplomatic achievement for the Iranians,” he said. “We have to take our decision in a cleareyed, independent manner, and we have to be serious enough to be responsible for our fate. Responsibility for the fate of the Jewish people and for the state of Israel lies with the Israeli government alone.”

The Israeli minister of strategic affairs, intelligence and international relations, Yuval Steinitz, said that “like the failed agreement with North Korea, this agreement is likely to bring Iran closer to obtaining the bomb.”

“Israel cannot take part in the international celebration, which is based on Iranian duplicity and self-deception,” he said.

One Israeli minister even warned that the pact could result in a nuclear attack against the West. “If five years from now a nuclear suitcase explodes in New York or Madrid, it will be because of the deal that was signed this morning,” the economic minister, Naftali Bennett, said in a statement.

Israeli outrage may have been fueled by the government’s sense of not having been kept fully in the loop by the Obama administration. Another minister, Silvan Shalom, was asked on Israel Radio if Israeli officials had been informed about the secret American-Iranian talks held over the past few months in Oman, as reported by The Associated Press early Sunday.

“It is not important whether or not we were informed,” Mr. Shalom said. “What is important is if we knew of it, and we did know.”

President Shimon Peres of Israel issued a statement saying that “the success or failure of the deal will be judged by results, not by words,” and he called on the Iranians “to reject terrorism” and to stop the nuclear program and the development of long-range missiles.

“Israel, like others in the international community, prefers a diplomatic solution,” Mr. Peres said. “But I want to remind everyone of what President Obama said, and what I have personally heard from other leaders: The international community will not tolerate a nuclear Iran. And if the diplomatic path fails, the nuclear option will be prevented by other means. The alternative is far worse.”

In the past, Mr. Peres has spoken out against the prospect of a lone Israeli strike against Iran’s nuclear facilities and has expressed confidence in the Obama administration’s commitment to stop Iran from obtaining nuclear weapons. While Mr. Peres’s role as president is largely ceremonial, he is widely respected as an elder statesman and, often, as a voice of moderation.