A Bad and Morally Indefensible Deal 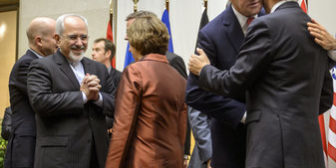 The announcement that the P-5+1 (the five U.N. Security Council members plus Germany) reached a nuclear deal with Iran has just been made. A few details of the deal have been announced and there likely will be others. But what has been reported so far is sufficient to conclude, as Israeli Prime Minister Netanyahu said of the draft deal reported two weeks ago, that “this is a very, very bad deal.”

The Iranian “concessions” thus far announced are unimpressive: Iran will stop enriching uranium beyond 5 percent; it will install no additional centrifuges; it will convert the 100 pounds or so of 20 percent enriched uranium which quickly can be converted to weapons-grade uranium to something harder to convert to weapons-grade uranium. Iran has not agreed to dismantle any of the thousands of centrifuges it has installed and continues to operate; to send any of its 20 percent enriched uranium out of the country; to close the nuclear facilities which will soon provide it with plutonium with which to make nuclear weapons; to stop its testing of long-range missiles; or to cease its support of terrorist activities by Hezbollah and others.

The United States has reportedly agreed to provide Iran with $7 billion in sanctions relief. This relief doubtless will help Iran in many ways, not least the “right” to continue the dangerous nuclear-weapons development and terrorist-support activities which it has long maintained. It will not be in the least surprising, as more details of the deal are announced, to learn of other benefits provided to Iran to induce it to agree . . . to something – anything.

The U.S., by pressing forward with this very, very bad deal has further eroded its dwindling international credibility. No country in the Middle East will perceive U.S. agreement to this deal as anything but further evidence of its weakness, further evidence that the U.S. is content to undermine its historical alliances, expressions to the contrary notwithstanding.

In defending the deal, the United States (and perhaps others among its P-5+1 partners) doubtless will point to the fact that it is only an interim step and that Iran has agreed to allow International Atomic Energy Agency inspectors to visit its still-operating facilities. Given Iran’s long history of preventing IAEA inspectors to do their jobs and its long history of flouting its obligations regarding its nuclear program, the value of this Iranian promise should be discounted to zero.

In a speech in Tehran this past week to a crowd of thousands that was broadcast live, Iranian Supreme leader Khamenei attacked the U.S., France, and Israel, saying that “Zionist officials cannot be called humans, they are like animals,” that “the Israeli regime is doomed to failure and annihilation,” that the “Zionist regime” is the “rabid dog of the region.”

The deal the U.S. and its partners just struck with Iran is a “very, very bad deal” as a practical and a political matter. In the context of Khamenei’s contemporaneous statements and the background of so many other statements of similar stripe, it is also morally indefensible.

— Jack David, a senior fellow of the Hudson Institute, served as deputy assistant secretary of defense for combating weapons of mass destruction and negotiations policy from 2004 to 2006.