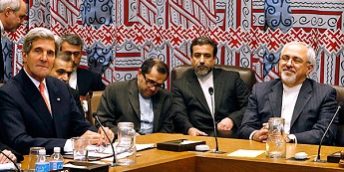 Top U.S. government officials on Wednesday continued to try to soften congressional opposition to the emerging interim deal between world powers and Iran, but ran into great skepticism on Capitol Hill. Both Vice President Joe Biden and Secretary of State John Kerry met with Senate officials on Wednesday in an effort to dissuade them from imposing a further set of sanctions on Iran.

“We put … sanctions in place in order to be able to put us in the strongest position possible to be able to negotiate,” Kerry told reporters ahead of testifying before the Senate Banking Committee. “We now are negotiating. And the risk is that if Congress were to unilaterally move to raise sanctions, it could break faith in those negotiations, and actually stop them and break them apart.”

President Barack Obama’s bid to reach a interim deal with Iran has run into resistance on Capitol Hill and a Democratic Senate official said on Wednesday that, despite the Obama administration’s efforts, a new set of sanctions on Iran would likely be passed by the Senate, perhaps within two weeks.

Kerry said Wednesday the U.S. and other world powers were united behind an offer they presented to Iranian negotiators in Geneva last week. But he said new action now from U.S. lawmakers could shatter an international coalition made up of countries with interests as divergent as France, Russia and China, endangering hopes for a peaceful end to the decade-long nuclear standoff with Iran.

Kerry said that negotiators should be given a “few weeks” more to see if they could reach an agreement.

The request faces sharp opposition from members of Congress determined to further squeeze the Iranian economy and wary of yielding any ground to Iran in the talks.

“The Iranian regime hasn’t paused its nuclear program,” said Rep. Ed Royce, a Republican and House Foreign Affairs Committee chairman. “Why should we pause our sanctions efforts as the administration is pressuring Congress to do?”

Kerry said the potential accord with Iran relates to a “tough proposal,” adding, “If it weren’t strong, why wouldn’t Iran have accepted it yet?”

“What we are asking everyone to do is calm down, look hard at what can be achieved and what the realities are,” Kerry said. “If this doesn’t work, we reserve the right to dial back the sanctions. I will be up here on the Hill asking for increased sanctions, and we always reserve the military option. So we lose absolutely nothing, except for getting in the way of diplomacy and letting it work.”

“We ought to be actually ratcheting up the sanctions against Iran,” Republican Senate Minority Leader Mitch McConnell. “What the administration was promoting is something the Israelis think is a bad deal for them. It’s pretty clear the Sunni Arab allies of ours also think it’s a bad deal. Looking at it strictly from an American point of view, I think it’s a bad deal as well.”

“It was an emotional appeal,” Republican Senator Bob Corker was quoted as saying. “I have to tell you, I was very disappointed in the presentation.”

According to Corker, senators were given no details of the interim deal being negotiated with Iran.

“I am stunned that in a classified setting when you’re trying to talk to the very folks that would be originating legislation relative to sanctions, to have such a lack of specificity — I feel I may get that over the next 24 hours in another setting, but it was solely an emotional appeal,” Corker said.

“I was supposed to disbelieve everything the Israelis had just told me, and I think the Israelis probably have a pretty good intelligence service,” Kirk said, noting that Israeli officials had told him that the total changes proposed in the deal would set back the Iranian nuclear program by just 24 days.

BuzzFeed quoted a Senate aide as saying that “every time anybody would say anything about ‘what would the Israelis say,’ they’d get cut off and Kerry would say, ‘You have to ignore what they’re telling you, stop listening to the Israelis on this.'”

“Today is the day I witnessed the future of nuclear war in the Middle East,” Kirk said, comparing the Obama administration to Neville Chamberlain. “How do you define an Iranian moderate? An Iranian who is out of bullets and out of money.”

Last week’s talks in Geneva broke down as Iran demanded formal recognition of what it calls its right to enrich uranium, and as France sought stricter limits on Iran’s ability to make nuclear fuel and on its heavy water reactor to produce plutonium, diplomats said

President Barack Obama spoke Wednesday by telephone with French President Francois Hollande. The two countries “are in full agreement” on Iran, the White House said in a statement.

Obama is under pressure at home and abroad to resolve the Iran nuclear standoff, having said the U.S. has until sometime next year before Iran could reach nuclear weapons capacity. Obama has reached out in an unprecedented manner to Iran’s new President Hasan Rouhani, with the two men holding the first direct conversation between U.S. and Iranian leaders in more than three decades.

At the same time, Obama’s diplomatic outreach to Iran has concerned U.S. allies Israel and Saudi Arabia, which view an Iranian nuclear arsenal as an existential threat.

The new set of sanctions under consideration was overwhelmingly approved by the Republican-led House in July. The legislation blacklisted Iran’s mining and construction sectors and committed the U.S. to the goal of eliminating all Iranian oil exports worldwide by 2015. If the Senate Banking Committee pushes off its parallel bill any longer, lawmakers could attach it to a Senate defense bill which could come up for debate as early as Thursday.

Meanwhile, Prime Minister Benjamin Netanyahu warned on Wednesday that a “bad deal” with Iran on its nuclear program could lead to war.

In a Knesset speech, Netanyahu said continued economic pressure on Iran was the best alternative to two other options, which he described as a bad deal and war.

“I would go so far as to say that a bad deal could lead to the second, undesired option,” he said, meaning war.

Also on Wednesday, Strategic Affairs Minister Yuval Steinitz said the emerging interim deal between world powers and Iran would negate up to 40 percent of the impact of sanctions.

Israel, which calculated the value of direct sanctions relief on offer at $15 billion to $20 billion, has lobbied hard against the interim deal and says the U.S. is being misled by overtures of detente coming from Iran.

One source briefed on the negotiations with Iran told Reuters that Iran was being offered a chance to sell about $3.5 billion of oil over six months as well as $2 billion to $3 billion of petrochemicals and $1 billion to $2 billion of gold. The source, who criticized the offer, said it would also let Iran import some $7.5 billion of food and medicine plus $5 billion of other goods currently barred.

Speaking at a Jerusalem Press Club event on Wednesday, Steinitz said of the emerging deal with Iran,”The damage to the overall sanctions, we believe, will be something between $20 billion and maybe up to $40 billion.”

Asked about the Steinitz’s $20 billion to $40 billion estimate, U.S. State Department spokeswoman Jen Psaki told reporters, “That number, I can assure you, is inaccurate, exaggerated, and not based in reality.”