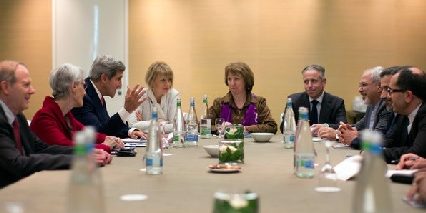 Secretary of State John Kerry and Vice President Joseph R. Biden Jr. pressed senators on Wednesday to give the Obama administration some breathing room to reach an accord with Iran to freeze its nuclear programs, warning that a new round of sanctions could mean war instead of diplomacy.

But they faced extreme skepticism from lawmakers in both parties who worry the administration is prepared to give the Iranian government too much for too little.

Mr. Kerry, briefing the Senate Banking, Housing and Urban Affairs Committee, made his case against the committee’s moving forward with a proposal for new sanctions even as Western diplomats were talking about easing existing sanctions in exchange for concessions on Iran’s nuclear program.

Moving too soon on a new round amounted to “getting in the way of diplomacy,” he said, suggesting that Congress could always act later.

“Let’s give them a few weeks, see if it works and we have all our options at our disposal,” he told reporters as he ducked into the closed-door meeting.

The briefing was part of an all-out effort by the administration both to tamp down congressional saber rattling and to move diplomacy forward to reach the agreement that proved elusive over the weekend in Geneva. President Obama has made a flurry of calls to the leaders of Britain and France ahead of a resumption of nuclear negotiations in Geneva on Nov. 21 and 22. On Tuesday night, he called Senator Harry Reid of Nevada, the majority leader, to discuss Iran, among other issues.

Mr. Biden met with the Democratic Congressional leadership, and on Thursday, administration officials will hold briefings for House leaders and members of the Senate.

Administration officials say they are in striking distance of an agreement that would halt much of Iran’s nuclear program for six months. The aim would be to freeze the program, and even roll back some of it, so the United States and its partners would have time to pursue more comprehensive talks with the Iranians. Easing sanctions would be part of an interim deal and would be done by providing the Iranians with access to frozen funds. But the officials say they would not remove the core sanctions as part of an initial agreement.

Critics in Congress and in Israel, however, say that economic pressure led the Iranians back to the negotiating table and that it would be a mistake to ease the pressure now.

“The American people justifiably and understandably prefer a peaceful solution that prevents Iran from obtaining a nuclear weapon, and this agreement, if it’s achieved, has the potential to do that,” said Jen Psaki, the State Department spokeswoman. “So as this legislation is being considered, members of Congress need to ask themselves: Do they believe diplomacy should be the first resort, or should we open the door to confrontation? And what — why not wait and see if diplomacy can be successful in this case?”

But the skepticism is bipartisan. Mr. Reid, a Democrat, said, “I hope we can work something out with Iran, but I am a person who really believes in the state of Israel.”

“Our concern over here in dealing with the nuclear capability of Iran is one thing,” he continued. “Put your mind-set that you’re in Israel. There are not thousands of miles separating you. It’s scores of miles. What we do has to be done right.”

After meeting with top administration officials, including Mr. Biden and Mr. Kerry, Senator Charles E. Schumer of New York, the third-ranking Democrat, said: “I am dubious of the proportionality of the deal. While I am exploring further details, I am worried that we are reducing sanctions while Iran is not reducing its nuclear capabilities.”

Representative Eliot L. Engel of New York, the ranking Democrat on the House Foreign Affairs Committee and a critic of the administration’s negotiating stance, said action on a new round of sanctions would actually help negotiations by allowing diplomats to say that absent major Iranian concessions, Mr. Obama’s hands will be tied by Congress.

Representative Gerald E. Connolly, Democrat of Virginia and a member of the Foreign Affairs Committee, suggested that the administration might be shedding “crocodile tears” over the possibility of new sanctions. But Mr. Kerry made the case that moving forward with sanctions, either in the committee or as an amendment to a defense policy bill next week, could not only end negotiations with Iran but lead to a military confrontation.

Treasury officials also briefed senators on Wednesday, assuring them that any sanctions relief offered in an interim accord to freeze nuclear development would be dwarfed by the amount of revenue Iran would continue to lose under the sanctions still in place. They noted that Iran had turned down the initial offer, and they told lawmakers that “no one is suggesting an open-ended delay for new sanctions,” according to a Treasury official.

Administration officials also argue that the imposition of new sanctions by Congress might prompt the United States’ allies to conclude that Washington, not Tehran, is responsible for any strains in the talks. That could backfire, State Department officials insist, by undermining international support for new sanctions.

The imposition of new sanctions “would send the wrong message to the international community,” Ms. Psaki said.