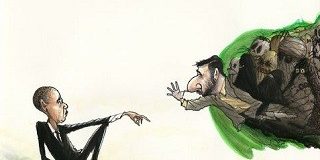 Talks on curbing Iran’s nuclear program ended with no deal early Sunday, but Israeli-American relations appear to be headed toward stormy waters after a pair of testy public exchanges between Prime Minister Benjamin Netanyahu and U.S. Secretary of State John Kerry.

The deal with Iran ultimately fell through on Saturday after France objected that proposed measures didn’t go far enough, but Kerry said “significant progress” had been made on the remaining differences. Officials in Jerusalem were surprised and upset to learn that the scope of sanctions relief offered to the Iranians was far more substantial than they were led to believe by the Americans.

Israeli officials were furious at the Obama administration over the emerging deal on Saturday, with one diplomat saying that “the Americans capitulated to Iranian maneuvering.”

“Kerry wants a deal at all costs and the Iranians are leading the Americans by the nose,” the official said.

Flashpoints of the impending deal:

• It will be an interim agreement (Israel wants a permanent deal)

• Construction will continue on the heavy water reactor at Arak, which produces plutonium (Israel wants the Arak reactor to be completely dismantled)

Israeli-American tensions burst into the open during Kerry’s swing through the region late last week. In an interview broadcast on both Israeli and Palestinian TV, Kerry questioned Israel’s seriousness about peace with the Palestinians.

In surprisingly blunt comments, Kerry told Israel’s Channel 2 TV on Thursday that Israel faced the possibility of international isolation and renewed violence with the Palestinians if peace efforts failed. He also said that continued settlement construction raised questions about Israel’s commitment to peace.

“How can you say, ‘We’re planning to build in the place that will eventually be Palestine?'” Kerry said. “It sends a message that somehow perhaps you’re not really serious.”

Netanyahu responded the next morning ahead of a meeting with Kerry, vowing not to cave into concessions to the Palestinians — and also saying he “utterly rejects” the emerging nuclear deal between world powers and Iran. Israeli news reports described Netanyahu as being in “shock” over the possible Iranian compromise.

“No amount of pressure will make me or the government of Israel compromise on the basic security and national interests of the State of Israel,” the visibly agitated premier said.

Netanyahu also slammed the emerging agreement with Iran. “Iran got the deal of the century, and the international community got a bad deal,” he said. “This is a very bad deal and Israel utterly rejects it.”

He warned that Israel is “not obliged” to honor the agreement and would do “everything it needs to do to defend itself.”

“I stress that the proposed deal does not even include the dismantling of one centrifuge. I asked all the leaders what the rush is. And I suggested that they wait, that they consider matters very seriously. At hand is a historical progression; historical decisions. I requested that they wait. It is good that this was ultimately the choice that was made but I am not fooling myself — there is a strong desire to strike a deal. I hope this is not a deal at all costs, and if there is a deal it needs to be good, not bad. I hope that they reach a good deal and we will do all in our power to convince the superpowers and their leaders to avoid a bad deal.”

Following a tense meeting on Friday morning stretching more than two hours, a planned joint appearance with Kerry and Netanyahu to the media was canceled and Kerry joined other foreign ministers summoned to Geneva after an apparent breakthrough in negotiations was achieved.

In an effort to allay Netanyahu’s concerns, U.S. President Barack Obama spoke with the prime minister by phone Friday night and underscored Washington’s “strong commitment to preventing Iran from obtaining a nuclear weapon” and the U.S.’s “ongoing efforts to advance a peaceful resolution of the international community’s concerns.”

Officials in Jerusalem believe that Obama has been pressuring the other countries involved in the negotiations to accept an agreement that Israel views as a “bad deal” — anything that allows Iran to become a threshold nuclear state by retaining the ability to build a nuclear weapon in a short amount of time if it chooses to do so.

White House spokeswoman Bernadette Meehan said Saturday the Obama administration was “in full agreement with Israel on the need to prevent Iran from obtaining a nuclear weapon” and that the negotiations had that goal in mind.

Nicholas Burns, a former senior State Department official, said that Netanyahu made an error by airing his grievances publicly.

“Prime Minister Netanyahu’s public outburst was unfortunate and ill-advised,” Burns, who now teaches at Harvard University’s John F. Kennedy School of Government, wrote in an email. “It has gone down very badly in the U.S.”

Netanyahu’s sentiments, however, were supported by his cabinet ministers over the weekend.

Defense Minister Moshe Ya’alon (Likud-Beytenu) said, “A deal now, in the current conditions, is an historical mistake. More so than ever, as the regime in Tehran is in a state of immense economic distress and fearful for its survival, Western states cannot blink first and agree to a bad deal, which, on the one hand will give Iran room to breath with the easing of sanctions, but will not force it to make real concessions regarding its nuclear program on the other.”

Finance Minister Yair Lapid (Yesh Atid) told the BBC that “the only reason are sitting around the table in Geneva is because sanctions are working. The moment some of the sanctions are removed the damn will break without the ability block the flood of companies that want to return to the Iranian markets.”

Meanwhile, Diaspora Affairs Minister Naftali Bennett (Habayit Hayehudi) called on world Jewry to try influencing their governments to reject an American-Iranian deal. Bennett, a member of Netanyahu’s security cabinet, sent a letter to the American Israel Public Affairs Committee, the Jewish Federations of North America, the Conference of Presidents of Major American Jewish Organizations, the Russian Jewish Congress, and other groups, which he later posted to his Facebook page, saying that “it would be dangerous to lift the sanctions and accept a deal which allows Iran to retain its entire uranium-production line.”

“…hen Iran launches a nuclear missile at Rome or Tel Aviv, it will have happened only because a Bad Deal was made during these defining moments,” he wrote. “The free world stands before a fork in the road with a clear choice: Either stand strong and insist Iran dismantles its nuclear-weapons program, or surrender, cave in and allow Iran to retain its 18,500 centrifuges.”

Even Opposition Leader MK Shelly Yachimovich (Labor), who has sparred with the prime minister over social and economic issues and his policies vis-à-vis the Palestinian peace process, warned of the need to be cautious with Iran.

“The picture being painted at the moment is somewhat disconcerting. Iran is breathing easier and can at any moment renew its armament.”

Meanwhile a tweet emerged on Sunday morning from the office of Iran’s supreme leader, Ayatollah Ali Khamenei: “#French officials have been openly hostile towards the #Iranian nation over the past few years; this is an imprudent and inept move. A wise man, particularly a wise politician, should never have the motivation to turn a neutral entity into an enemy. #France.”