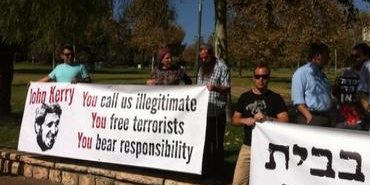 Dozens of protesters gathered to condemn US Secretary of State John Kerry Sunday at Jerusalem’s US Consulate for remarks he made Thursday about the prospect of a third intifada due to Israeli intransigence, which they said resulted in the Friday firebombing of a car in Judea.

The protest was scheduled to feature the charred remains of the vehicle allegedly firebombed by Palestinian terrorists Friday in Gush Etzion, narrowing killing the married couple inside, but police did not permit it to be delivered to the event sponsored by the YESHA Council.

In Kerry’s statements, broadcast during a joint interview between Channel 2 and Palestine TV, he deemed  Judea and Samaria settlements as illegitimate, warned of Israel’s isolation if peace talks fail, and asked, “Does Israel want a third intifada?”

Participants at the Sunday morning protest denounced Kerry for inciting Friday’s violence, which resulted in the couple’s hospitalization at Jerusalem’s Ein Kerem Medical Center for moderate burns after their vehicle was struck by several Molotov Cocktails.

Shai, who attended the demonstration, but requested his last name be omitted, said his daughter’s teacher was the driver of the vehicle.

“Where else in the world does your daughter’s teacher not show up for school because miraculously she survived a fire bombing?” he asked.

Deeming Kerry’s words a “self-fulfilling prophecy,” Shai said he strongly questioned the mediator’s impartiality, blaming him for the attack.

“He’s essentially acting as spokesperson for the Palestinian Authority, which continues to incite violence,” he said.

MK Orit Struk (Bayit Yehudi), of Hebron, who survived a similar attack on a bus she was traveling in through the West Bank last Monday, said Kerry is responsible for an imminent third intifada.

“He was trying to threaten us with a third intifada and I know that the intifada is already here – and it’s here because of him and the terrorists he set free,” she said.

“It’s a shame that the secretary of state of the United States is on the side of the terrorists,” Struk added.

Meanwhile, Jeff Daube, director of the Israel office of the Zionist Organization of America, condemned Kerry’s rhetoric on behalf of his agency.

“As far as the ZOA is concerned we wonder why Kerry is not mentioning any of the acts of Palestinian terrorism in general, and this one in particular,” he said. “He will be responsible, as far as we’re concerned, for any uptick in violence.”

Daube went on to caution Kerry of the powerful consequences of his words.

“I’m hoping the secretary of state will give more thought to his comments in the future because this could have deadly consequences,” he added.

The demonstration’s organizer, Elie Pieprz, director of external affairs of the YESHA Council, said Kerry is responsible for Friday’s firebombing, adding that he should be disqualified from his role as peace broker for his “reckless behavior.”

“Thursday Kerry makes a statement how Judea and Samaria are illegitimate, that there will be a third intifada and the next day there was a firebombing there,” he said. “A plus B equals C.”

Pieprz  noted that because the peace talks are intended to address Judea and Samaria’s status, by deeming the territories “illegitimate” Kerry should be disqualified from his role.

“We need to understand that what Kerry said on Thursday should disqualify him as a mediator for the peace process,” he said.

In response to the protest and dire concerns expressed at the demonstration, Jerusalem Deputy Mayor Pepe Alalu (Meretz) said he strongly doubted a third intifada would arise due to failed peace talks because of a pronounced lack of Palestinian unity.

“The Palestinians are divided and there is no real organization, which is the result of Israeli suppression over the years,” he said. “Without unity a third intifada is not possible.”

While Alalu conceded that future violence is likely, he said it will be “sporadic.”

Alalu added that Palestinians have little faith in Kerry, PA President Abu Mazen or Prime Minister Binyamin Netanyahu, and view the handling of talks as “anarchy.”

“They don’t trust any of the key players,” he said.