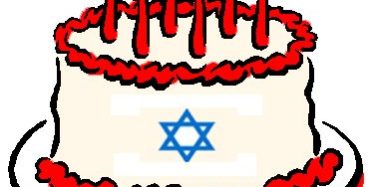 The World Happiness Report, released recently, ranked Israel the 11th-happiest country in the world, ahead of the United States, and far ahead of its neighbors in the region, and was based on data collected from 156 countries between 2010 and 2012. The report ranked the happiness of the world’s nations based on a “life evaluation score,” measuring several factors including health, family and job security, and social factors like political freedom, social networks and lack of government corruption.

The index was a collaborative effort between the Vancouver School of Economics, the Canadian Institute for Advanced Research, the London School of Economics, and Columbia University. Israel jumped three spots in the rankings from last year, coming in just behind Australia (10th). The United States dropped six spots, coming in at 17th. Israelis (including of course Israel’s Arab citizens) are much happier when compared to their neighbors in the Middle East. Jordan ranked 74th in the survey, Lebanon 97th, and Egypt 130th.

Despite this vote of confidence in Israel’s future sustainability, we are witnessing in Israel a concerted media campaign to present Israel in the most undesirable and critical manner calculated to portray Israel as no less than Hell on earth. Blatant lies and fabrications are used to explain why Israeli’s are emigrating from Israel at an unprecedented rate, about the deteriorating education system, about the lack of health care, about the lack of hope for young people, about the academic brain-drain, about the spiraling cost of living and about the soaring prices of real estate.

By presenting a brief cluster of facts, these forbearers of doom are easily dismissed: the Israeli economy has been generating new jobs at the rate of 100,000 to 120,000 a year, with the unemployment rate falling to an unprecedented low last month of 6.1%. As far as Israel’s “collapsing” health system, it was ranked 4th in the world in efficiency in a Bloomberg ranking, and the OECD has reported the Israeli health system as one of the best among the organization’s member states. Life expectancy is among the highest in the world, the number of suicides is among the lowest in the world. As for the emigration rate and the imaginary brain-drain, Israel has enjoyed this past year the lowest figure in the past 30 years as the emigration rate has fallen to an unprecedented rate. So with all this good news about Israel, why has this overall positive situation been transformed into describing Israel as a horrible and inhabitable place to live. What are the motivating factors behind this home-produced campaign to question the success of Israel as a modern nation and as the home of the Jewish nation.

This calculated and orchestrated campaign of lies can be easily traced to political parties, ideological NGO’s, and media opinion personalities who all support much of the leftist agenda that has been rejected by the electoral public in recent years. They have realized that when the ballots repeatedly refuse to elect their politicians supporting their leftist agenda allowing Prime Minister Netanyahu to be a third term national leader, then blatant lies are an appropriate and in their eyes a legitimate  persuasion tool. Yet to better understand their negation of Israel as a modern day success story, we must look beyond ideology and try to understand this phenomenon from an introspective analysis.

For these Jewish brethren, whether homegrown or from Jewish supporters living abroad, primarily in the United States, the issue at hand is not that they are not especially connected to Israel but rather because they are not especially connected to their own Jewishness. Being Jewish simply does not turn them on. Being uncomfortable with one’s Jewishness and disconnecting the Jewish nation from her Biblical roots as the Chosen people were proposed by Jewish intellectuals even before Zionism existed as a movement. The roots to this century old Jewish in-house conflict can be traced to the period of the Jewish Enlightenment, a movement among European Jews that began in the 18th–19th centuries and has essentially continued unabated until today finding expression in the “new-Anti-Semitism” which doesn’t differentiate between anti-Jewish and anti-Israel.

Why is it that these Jews find it so difficult and uneasy to express support for Israel? Is it because they confuse supporting Israel with supporting official policy? That is, if they disagree with Israel’s policies, they find it difficult – even impossible – to express support for Israel? Supporting Israel has become for them a messy and complicated discourse. For them praising Israel raises too many questions concerning their own personal Jewish identity and Jewish affiliation. For these Jewish critics of Israel, they are not interested in a debate, their aim in not to engage or interact but to undermine and demonize. Their opposition is not open to reason or good will. Their rejection of a positive narrative about Israel’s sustainable future only intensifies the geo-strategic reality challenging Israel domestically as well as internationally, and they couldn’t be happier. The worse the better, and the better the worse it gets.

In recent days, two events seemingly unrelated yet having major implications for the State of Israel transpired almost simultaneously, the yearly Memorial Day for Yitzchak Rabin and the funeral of HaRav HaGaon Ovadia Yosef. The sheer numbers of hundreds of thousands that attended Israel’s largest funeral ever to pay final respect to Israel’s greatest rabbinical authority in modern times put Rabin’s memorial event in proper perspective as far as public support. The “Peace Narrative” having been rejected by the Israeli public has been superseded by the “Israeli is a lousy place to live narrative”.  Despite these efforts of opinion makers to demoralize and weaken the resiliency of the people of Israel, the “Israeli is a lousy place to live narrative” will be rejected in the same manner that the Rabin legacy has lost most of its public’s support. In 500 years when Israel will be the most emulated nation on the globe, no one will even remember who Rabin was, but I am sure that HaRav HaGaon Ovadia Yosef will be quoted and read on a wide scale every day of the year. Questioning Israel’s future sustainability will be delegated to future historians who will be baffled to explain this phenomena.

The writer, a 25-year veteran of the I.D.F., served as a field mental health officer. Prior to retiring in 2005, served as the Commander of the Central Psychiatric Military Clinic for Reserve Soldiers at Tel-Hashomer. Since retiring from active duty, he provides consultancy services to NGO’s implementing Psycho trauma and Psycho education programs to communities in the North and South of Israel. Today, Ron is a strategic advisor to the at the Office of the Chief Foreign Envoy of Judea and Samaria           To contact: medconf@netvision.net.il