Lessons from the Yom Kippur War 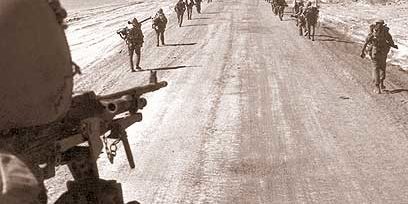 Forty years ago, Israel experienced the most devastating war in its modern history. Israel not only suffered its worst casualties during the Yom Kippur War, but actually came close to being destroyed with Defense Minister Moshe Dayan warning that “The Third Temple is falling.”

To understand the lessons of the Yom Kippur War, it is important to understand the three key elements that led to it. These are Muslim deceptiveness, American diplomatic pressure and Israeli complacency.

Egypt had lulled Israel into complacency by faking a crisis. Before the Yom Kippur War everyone “knew” that Egypt’s air force was defunct and that its military was no threat because of an arms dispute with the Soviet Union.

While there was a dispute, one of many, with the Arab powers demanding more and better weapons, the claims of weakness were a façade. During the Six-Day War, Israel had faced overwhelming odds. Now it seemed to be facing a weakened Egypt under a “moderate” leader whose ties with his Soviet allies appeared to be fraying.

Israel was warned to avoid any provocative responses to Egyptian military preparations or it would be considered the aggressor. A preemptive strike, the move that had won the Six Day War, was out of the question. Instead Israel could only react to overt aggression while letting an enemy force that was larger than it make its preparations for war and dictate the terms of battle.

Israel had beaten Egypt before. That meant that even though Egypt had twice as many soldiers and the combined Arab attack forces had nearly twice as many tanks, Israel was considered the stronger party. And just like today, it was expected to show restraint against a “weak” Muslim enemy.

That put Israel into a box that it has never managed to get out of. Since then, the Muslim side has learned to appear weaker to maintain freedom of action. Using terrorists as proxy armies under the cover of a phony Palestinian nationalism inflicted severe damage on Israel using a “weaker” enemy.

Before the Yom Kippur War, Secretary of State Henry Kissinger had made it obvious that he wanted Israel to take a beating to score points with Muslim leaders.

In his book, King’s Counsel, Jack O’Connell, a close advisor to King Hussein of Jordan, describes Kissinger meeting with Egypt’s National Security Advisor and telling him that, “If you want us to intervene with Israel, you’ll have to create a crisis. We only deal in crisis management. You’ll have to ‘spill some blood.’”

Kissinger then tried to keep President Nixon out of the loop, delaying notifying him that the war had started and trying to keep him from returning to Washington. Nixon had told Kissinger from the start that he had to “squeeze the old woman” (Golda Meir) because “we can’t have a hundred million Arabs hating us.” But Kissinger was going far beyond anything Nixon wanted.

The arms shipment that helped stabilize the Israeli counterattack was delayed by Kissinger, but finally pushed through by Alexander Haig while Kissinger was still trying to calculate a “sweet spot” that would prevent Israel from either being destroyed or winning a major victory.

The goal was to beef up the self-esteem of Muslim countries which had lost wars to Israel while using the Jewish State as leverage to force them into a relationship with the United States.

On his fourth day in office, Kissinger told President Ford, “We couldn’t have done better if we had set the scenario.” “Even the heavy Israeli losses helped, didn’t they?” Ford replied.

Those same calculations are still going on today.

If diplomacy is the art of saying “Nice doggy”  until you find a rock, then Israel is the rock. The diplomats get it backward believing that the only reason the nice doggy is growling at them is because they have a rock in their hands. They want the doggy to behave nicely and watch the front yard. They don’t care about the interests of the rock.

But the process has worked in reverse, with the weakening of Israel also weakening American influence.

The third factor is Israeli complacency. The Israeli Labor leaders had forgotten that the Six Day War had been a desperate gambit in a crisis and that it had succeeded because of the quality of the men in the field, not the leadership. Golda Meir was a long way from the humble Levi Eshkol and Moshe Dayan, like Rabin and Sharon and too many other Israeli generals, had come to believe his own press.

Israel had overcommitted itself to passive defenses, to the Bar Lev Line; the Iron Dome of the day. The Bar Lev Line was the embodiment of the opposite of the tactics that had won the Six Day War. It was not an action, but a reaction, a series of defensive fortifications arising in response to Egyptian shelling that grew until the reaction became the heart of Israel’s military strategy.

While Egypt plotted an invasion, Moshe Dayan extended tentative withdrawal offers and reports from the Bar Lev Line of Egyptian troop movements were dismissed as a misunderstood training exercise.

Israel’s leaders did not know what they wanted and Israeli soldiers paid the price.

Like any Israeli reactive strategy, the Bar Lev Line was doomed. Ariel Sharon had argued for a mobile approach and Haim Bar-Lev had tried to force Sharon out of the IDF.  Prime Minister Sharon however would embrace his own Bar Lev Line with the Separation Wall that like the Bar Lev Line provided a temporary illusion of security without the substance.

Despite their courage and innovativeness, Israelis easily become complacent assuming that whatever their government is doing must be working. That is something they share with Americans and Europeans who are shocked by each new terrorist attack.

Complacency in war is the path to defeat and the war has never ended.

The Israeli political and military establishment is too busy with its internal arguments to pay enough attention to what is going on outside its walls. There is no shortage of military and intelligence brass eager to provide the same empty assurances about the improbability of an Iranian attack that their predecessors provided about the improbability of an Egyptian attack in 1973.

Netanyahu is aware of the stakes, but is hamstrung by an American government still obsessed with appeasing Muslims to stabilize the Middle East and by an Israeli military and intelligence establishment that resembles the incestuous Old Boy Network in 1973, but is more heavily politicized because its members are even more eager to run for public office.

The ultimate lesson of the Yom Kippur War comes from Zvika Greengold who held out against the 51st Tank Brigade of the Syrian Army in only one tank.

“One thing that stayed with me after this war was the feeling of being alone,” he said later, “not in a room, but in a war, with one tank.”

That is Israel; fighting alone against impossible odds. It forgets that at its own peril.