Back to the Future – European Anti-Semitism vs American Assimilation 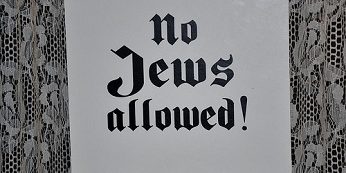 It was last week during Succoth, that we read and heard that timeless  quote  from Kohelet, “Nothing new under the sun.” A resolution that calls male ritual circumcision a “violation of the physical integrity of children” was passed overwhelmingly by the Parliamentary Assembly of the Council of Europe, a pan-European intergovernmental organization. The European Council called on all member states to “clearly define the medical, sanitary and other conditions to be ensured for practices such as the non-medically justified circumcision of young boys” and also to “adopt specific legal provisions to ensure that certain operations and practices will not be carried out before a child is old enough to be consulted.”

“Israel calls on the Council to rescind immediately the resolution,” a statement issued by Foreign Ministry spokesman Yigal Palmor said. “Circumcision of male children is an ancient religious tradition of two important religions, Judaism and Islam, and it is also common among some Christian circles,” the foreign ministry’s statement said. “Any comparison of this tradition to the reprehensible and barbaric practice of female genital mutilation is either appalling ignorance, at best, or defamation and anti-religious hatred, at worst.” According to Palmor, claims that circumcision harms young boys’ health and bodies are false, and do not rest on any scientific evidence. He noted that an official paper published by the American Academy of Pediatrics on August 2012 shows the health benefits of newborn male circumcision. The resolution is “an intolerable attack both on the respectable and ancient religious tradition that lies at the base of European culture, and on modern medical science and its findings,” it added. “This resolution casts a moral stain on the Council of Europe, and fosters hate and racist trends in Europe.”

Also during these very same days of Succoth in which the Europeans proved once again that they cannot let go of their timeless Anti-Semitism, the first comprehensive survey of American Jews in the 21st Century was released revealing dramatic changes in American Jewish identity. According to one of the study’s lead authors, no less than  one-fifth of American Jews don’t even call themselves “Jewish” when asked about their religion. The national survey by the Pew Research organization called – A Portrait of Jewish Americans published their results after speaking with over 70,000 Jews across the United States. The most significant revelation is the increasing rate of assimilation or the attrition rate of all the movements (including Orthodox). According to recently-published data, the rate of mixed-marriages among the vast Jewish community is nearing 60%, and a Christmas tree is placed in a third of Jewish homes in America around the time of Hanukkah. Let’s not forget the 22 percent who consider themselves “Jewish with no religion?”  What exactly does it mean when a Jew claims to have “no religion?” G-d knows!

Greg Smith, Director of US Religion Surveys at the Pew Research Center had stated that this group “Jews of no religion” is rising in numbers. Among US Jews who were born before 1927, the so-called Greatest Generation, only seven percent did not call themselves Jewish by religion. By contrast, among American Jewish Millennials, those born after 1980, 32% do not describe themselves as Jewish by religion. “That is a big and significant number,” says Smith. “The generational pattern suggests that it’s growing and that’s very important because the data show that Jews of no religion are much less connected to the Jewish community, are much less engaged and involved in Jewish organizations and are much less likely to be raising their children Jewish as compared to Jews who describe themselves as Jews by religion.”

The Pew Survey clearly shows that Israel has become a source of pride for Jews again. The rebranding of Israel, as a Startup Nation, the thriving religiosity of the Israeli public incorporating all denominations, pulsating with religious creativity and activity; all one had to do is see the  sold out audiences in non-Orthodox Shuls throughout Israel during the recent Holidays, have all contributed to the overall identification of American Jews with the State of Israel. Emotional attachment to Israel has not waned among American Jews in the past decade. Overall, 70 percent of Jews said they feel either very attached or somewhat attached to Israel. In addition, 43 percent of Jews have been to Israel, and of those, 23 percent have visited more than once. A whopping 40 percent of Jews say they believe God gave the land of Israel to the Jewish people. More than 40 percent of those surveyed said caring about Israel is a big part of what it means to be Jewish.

During the same week that the Europeans adopted regulations that conveyed the simple message to the European Jewish communities that by banning an ancient religious Jewish ritual,  Jews are no longer welcome to continue living in the European Continent, we also learned  that for American Jewry, the largest area of consensus and agreement is in their identification and sense of affiliation with the State of Israel. In both cases, Israel enables the power of ritual and community to be upheld for future generations of Jews. Israel ensures that the chain beginning with our forefathers and foremothers will remain unbroken. Only Israel can sustain the likelihood that future descendants of Jews will remain Jewish in future generations.

The writer, a 25-year veteran of the I.D.F., served as a field mental health officer. Prior to retiring in 2005, served as the Commander of the Central Psychiatric Military Clinic for Reserve Soldiers at Tel-HaShomer. Since retiring from active duty, he provides consultancy services to NGO’s implementing Psycho trauma and Psycho education programs to communities in the North and South of Israel. Today, Ron is a strategic advisor to the at the Office of the Chief Foreign Envoy of Judea and Samaria
To contact: medconf@netvision.net.il