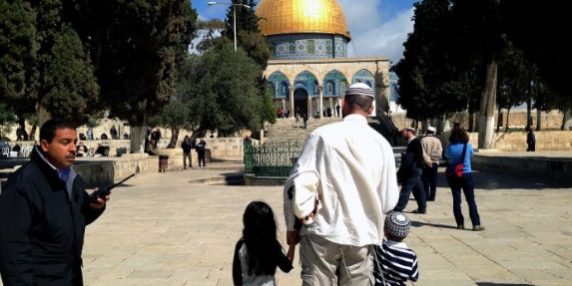 Small groups of Jews are increasingly ascending the Temple Mount in Jerusalem’s Old City, a sacred site controlled for centuries by Muslims, who see the visits as a provocation that could undermine the fragile peace talks started this summer.

For decades the Israelis drawn to the site were mainly a fringe of hard-core zealots, but now more mainstream Jews are lining up to enter, as a widening group of Israeli politicians and rabbis challenge the longstanding rules constraining Jewish access and conduct. Brides go on their wedding days, synagogue and religious-school groups make regular outings, and many surreptitiously skirt the ban on non-Muslim prayer, like a Russian immigrant who daily recites the morning liturgy in his mind, as he did decades ago in the Soviet Union.

Palestinian leaders say the new activity has created the worst tension in memory around the landmark Al Aksa Mosque and Dome of the Rock, and have called on Muslims to defend the site from “incursions.” A spate of stone-throwing clashes erupted this month: on Wednesday, three Muslims were arrested and an Israeli police officer wounded in the face. And on Friday thousands of Arab citizens of Israel rallied in the north, warning that Al Aksa is in danger.

“We reject these religious visits,” Sheik Ekrima Sa’eed Sabri, who oversees Muslim affairs in Jerusalem, said in an interview. “Our duty is to warn,” he added. “If they want to make peace in this region, they should stay away from Al Aksa.”

The 37-acre site is perhaps the most religiously contested place on earth. Jews revere it as the home of the First and Second Temples 2,000 years ago. For Muslims, who call the site the Noble Sanctuary, it is the world’s third holiest spot, from which Muhammad is believed to have ascended to heaven. More than 300,000 foreign tourists also flock there annually, many of them Christians drawn to the ruins of the temple Jesus attended.

Politically, the competing claims to the area are the nut around which the Israeli-Palestinian conflict revolves, the symbolic heart of each side’s religious and historical attachment to Jerusalem that has made its governance one of the thorniest issues in peace negotiations.

Israel captured the site along with the rest of East Jerusalem and the West Bank in 1967, with a general declaring dramatically, “The Temple Mount is in our hands!” But the government immediately returned control to the Muslim authorities, and ever since, a de facto accommodation has prevailed in which Muslims worship at Al Aksa above and Jews at the Western Wall below, a remnant of the retaining wall around the ancient Second Temple.

There have been flare-ups before. In 2000, a visit by Ariel Sharon, then Israel’s opposition leader, accompanied by 1,000 police officers, prompted a violent outbreak and, many argue, set off the second intifada.

Over the last few years, a cause long taken up by only a fringe group of far right-wingers has increasingly been embraced by the modern Orthodox — known here as religious Zionists — who have also gained political power. At three recent Parliament hearings, religious lawmakers and cabinet ministers questioned the status quo, in which non-Muslims can enter the site only for a few hours five days a week, and those identified by the police as Jews are separated, escorted by police officers and admonished not to dance, sing, bow down or even move their lips in prayer.

“The Temple Mount is in our hands — but is it really?” asked Michael Freund, a Jerusalem Post columnist who visited the site as a child in 1977 and returned for the first time last year, with 50 members of his synagogue. “It particularly offends me that the Israeli government puts into place restrictions which prevent Jews from fulfilling their basic right to freedom of worship.”

Jack Stroh, a cardiologist from East Brunswick, N.J., who visited on Wednesday, has been bringing friends for five years before the holidays of Sukkot and Passover — two of three pilgrimage festivals when ancient Jews were required to pray at the temples.

“My cousin said that if Jews don’t go up to the mountain there is an increased chance that the government will say Jews are not interested and will give it away,” he said as his group waited to enter. “I’m taking them up. Someone took me up. They’ll take other people up; it’s a growing phenomenon.”

Amid the religious pilgrims on Wednesday was Michal Berdugo, 25, a secular Israeli who said it had been her “dream for three years” to visit. “It’s part of who we are,” she said.

The recent shift has many roots. For years, most authorities on Jewish law said Jews should not enter the complex for fear of treading on the ancient temple’s holiest spots, but recent archaeological work has led some liberal and even moderate Orthodox rabbis to lift those bans. At the same time, activists have stepped up their campaign for access and prayer at the Temple Mount, part of a broader push to cement Jewish control of all of Jerusalem.

Experts who have observed the phenomenon also see it as a reaction to Israel’s evacuation of Jews from the Gaza Strip in 2005, a redirection of Messianic energy once devoted to West Bank settlements that many fear could soon succumb to the same fate to make way for a Palestinian state.

“The war for the land of Israel is not just political, but essentially spiritual,” said Yossi Klein Halevi, author of a new book that traces the lives of paratroopers who seized the Mount in 1967. “Given that the Temple Mount is the focal point of holiness in the Holy Land, the thinking is that we need to go to the source in order to prevent the further partition of the land.”

Israel Police statistics show visits by people identified as Jews rose to 8,247 in 2011 from 5,792 in 2010, then dipped slightly last year. The figure is on track to top 2011’s total this year, with 5,609 Israelis coming through July. Crowds — and clashes — are expected Sunday and Monday for Sukkot.

While the numbers remain tiny compared with the 10 million annual visitors to the Western Wall below, Palestinian officials say what used to be a trickle of individuals has given way to groups of 40, 60, 90. They were particularly alarmed that the Israeli police commissioner told a newspaper this month that “every Jew who wishes to pray at the Temple Mount can pray on the Temple Mount,” though his subordinates said afterward that did not change the police policy on the ground preventing non-Muslim prayer. A recent visit by the right-wing housing minister also stirred outrage.

“Before, it was some settlers from here, some extremists from there; now we start to hear it from the real officials,” said Adnan Husseini, the Palestinian governor of Jerusalem. “When they get inside with this big number, it’s sure that they will make some kind of religious activities and there will be more friction between them and the people inside the mosque.”

The Palestinians have complained to the United Nations, the Arab League and Secretary of State John Kerry, most recently after Wednesday’s clash, when the chief Palestinian negotiator wrote to Mr. Kerry saying the issue “could inflame the situation and undermine the current opportunity to move toward peace.”

Israel’s chief rabbinate still maintains the Mount is off limits to Jews — a sign saying so is posted at the gate. But a senior Israeli official, speaking on the condition of anonymity, said the government supports “in principle” Jews’ rights to pray there, adding, “we’ve got to do it in a measured way, a sensitive way.”

As visiting the Mount has become more mainstream — one Israeli newspaper has since December 2011 devoted a full page weekly to news and columns about the site — the original hard core has been emboldened. A group formed last year calls for building a small synagogue on the plaza. Yehuda Etzion, who was arrested in 1984 for plotting to blow up the Dome of the Rock, and a team of architects are designing a “future Jerusalem” plan with a new temple at its heart. An activist group’s Web site devoted to the Mount unveiled a virtual tour this summer with a Third Temple where the Dome stands.

“We’re talking about something much deeper than visiting the place, we’re talking about a movement that wants to change the status quo from its roots,” said Yedidia Z. Stern, a vice president of the Israel Democracy Institute, an Orthodox Jew with liberal leanings who has watched the change with concern. “You’re dealing with the ultimate TNT in our national existence here.”

For Max Freidzon, the Russian immigrant, visiting the site has become a daily ritual: he stands still several times on his stroll around the Mount, and goes through the morning prayers — including a plea to rebuild the temple — without moving his lips.

“The situation is the same like it was in the Soviet Union,” said Mr. Freidzon, 46, citing the police escorts, the identification checks, and the ban on religious texts and on a minyan, the 10-person quorum required for public communal prayer. “Step by step, the situation will change. It’s necessary to pray here, and to make here minyan, and to build here temple.”