Obama would rather negotiate fecklessly than contend responsibly 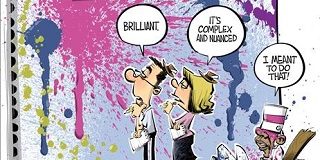 Did US President Barack Obama score a great victory for the United States by concluding a deal with Russia on Syria’s chemical weapons or has he caused irreparable harm to the US’s reputation and international position? By what standard can we judge his actions when the results will only be known next year?

Obama and Kerry have trumpeted the agreement as a great accomplishment. They say it could never have been concluded had the US not threatened to carry out “unbelievably small” punitive military strikes against the Syrian regime in response to its use of Sarin gas to massacre 1,400 civilians in the suburbs of Damascus on August 21.

And then there is the perception of an “Iran dividend” from the US-Russian deal. Just two days after last Saturday’s agreement, speculation mounted about a possible breakthrough in the six party negotiations with Iran regarding its illicit nuclear weapons program.

According to Der Spiegel, Iranian President Hassan Rouhani may consider closing down Iran’s illicit uranium enrichment facility at Fordo under IAEA supervision in exchange for the removal or weakening of economic sanctions against Iran’s oil exports and its central bank.

The White House has not ruled out the possibility that Obama and Rouhani may meet at the UN General Assembly meeting later this month. These moves could pave the way for a reinstatement of full diplomatic relations between the US and Iran. Those relations were cut off after the regime-supported takeover of the US embassy in Teheran in 1979.

Obama’s supporters in the US media and Congress have hailed these developments as foreign policy victories for the United States. Thanks to Obama’s brilliant maneuvering, Syria has agreed to disarm from its chemical weapons without the US having had to fire a shot. The Iranians’ increased willingness to be forthcoming on their nuclear program is similarly a consequence of Obama’s tough and smart diplomacy regarding Syria, and his clever utilization of Russia as a long arm of US foreign policy.

For their part, critics have lined up to condemn Obama’s decision to cut a deal with Russia regarding Syria.

They warn that his actions in that regard have destroyed the credibility of his threat to use force to prevent Iran from developing or deploying nuclear weapons.

To determine which side is right in this debate, we need to look no further than North Korea.

In April 1992 the IAEA concluded that North Korea was hiding information on its nuclear program from the UN and declared it in breach of the Nuclear Non-Proliferation Treaty it signed in 1985. In March 1993 North Korea announced its intention to vacate its signature from the NPT. Later that year, it later offered to begin negotiations related to its illicit nuclear program with the US.

Those negotiations began in early 1994, after the US canceled planned joint military exercises with South Korea as a goodwill gesture to the North. The talks led to the Agreed-Framework Agreement concluded later that year under which North Korea agreed to shutter its nuclear installation at Yongbyon where it was suspected of developing plutonium based nuclear weapons. In exchange the US and its allies agreed to build light water nuclear reactors in North Korea, and to provide North Korea with oil for energy production until the reactors were up and running.

In November 2002 the North Koreans acknowledged that they were engaging in illicit uranium enrichment activities. In January 2003 Pyongyang announced it was withdrawing from the NPT.

In February 2005 it announced it possessed a nuclear arsenal. And on October 9, 2006, North Korea launched its first test of a nuclear bomb.

The US suspended its talks with North Korea in 2003. It responded to the nuclear test by renewing those negotiations just weeks after it took place. And in February 2007 the US and North Korea reached an agreement under which Pyongyang agreed to close down Yongbyon in exchange for a resumption of shipments of free oil.

In September 2007, against the strenuous opposition of then secretary of state Condoleezza Rice, who was the architect of the US’s renewed push to cut a deal with North Korea, Israel destroyed a North Korean built nuclear reactor almost identical to the Yongbyon nuclear reactor in the Syrian desert. Had it become operational, Syria would likely have developed a nuclear arsenal by now.

Amidst fears that North Korea had reopened the reactor in the fall of 2008, the US removed North Korea from the State Department’s list of state sponsors of terrorism.

Six months later, in April 2009, Pyongyang resumed its reprocessing of spent fuel rods for the production of plutonium. And the next month it conducted another nuclear test.

In 2010, North Korean scientists at Yongbyon told Siegfried Hecker, a former director of the Los Alamos National Laboratory that the plutonium reactor had been shuttered.

Later in 2010, the North Koreans began open enrichment of uranium at Yongbyon.

Enrichment activities have doubled in scale since 2010. US experts now assess that with 4,000 centrifuges operating, North Korea produces enough enriched uranium to build three uranium based nuclear bombs every year. On February 12, 2013 North Korea conducted a third nuclear test. Experts were unclear whether the tested bomb a plutoniumbased or uranium-based nuclear weapon.

On September 11, the media reported that the latest satellite imagery indicates the North Koreans have resumed their plutonium production activities at Yongbyon.

Although the media claim that this represents an abrogation of the 2007 deal, it is unclear why that deal was considered in place given that North Korea began its reprocessing activities in April 2009 and tested another nuclear weapon the next month.

Although it issued a strong statement condemning the reopening of the plutonium operation at Yongbyon, the Obama administration remains committed to the sixparty talks with North Korea.

When viewed as a model for general US-non-proliferation policy, rather than one specific to North Korea, the North Korean model involves a rogue state using the Chinese and Russians to block effective UN Security Council action against its illicit development and proliferation of weapons of mass destruction.

Faced with a dead end at the UN, the US is forced to decide between acting on its own to compel a cessation of the illicit behavior, or to try to cut a deal with the regime, either through bilateral or multilateral negotiations.

Not wishing to enter into an unwanted confrontation or suffer domestic and international condemnations of American unilateralism, the US opts for diplomacy. The decision is controversial in Washington. And to justify their decision, the champions of negotiating deals with rogue proliferators stake their personal reputations on the success of that policy.

In the case of Rice, her decision to open negotiations with North Korea following its nuclear test was staunchly opposed by vice president Dick Cheney. And once the policy was exposed as a failure first by the intelligence reports proving that North Korea was proliferating its nuclear technologies and know-how to Syria, and then with its early suspension of its agreement to the 2007 agreement, rather than acknowledge her mistake, she doubled down. And as a consequence, under the nose of the US, and with Washington pledged to a framework deal to which North Korea stood in continuous breach, North Korea carried out two more nuclear tests, massively expanded its uranium enrichment activities, and reinstated its plutonium production activities.

Just as importantly, once the US accepted the notion of talks with North Korea, it necessarily accepted the regime’s legitimacy. And as a consequence, both the Clinton and Bush administrations abandoned any thought of toppling the regime. Once Washington ensnared itself in negotiations that strengthened its enemy at America’s expense, it became the effective guarantor of the regime’s survival. After all, if the regime is credible enough to be trusted to keep its word, then it is legitimate no matter how many innocents it has enslaved and slaughtered.

With the US’s experience with North Korea clearly in mind, it is possible to assess US actions with regards to Syria and Iran. The first thing that becomes clear is that the Obama administration is implementing the North Korean model in its dealings with Syria and Iran.

With regards to Syria, there is no conceivable way to peacefully enforce the US Russian agreement on the ground. Technically it is almost impossible to safely dispose of chemical weapons under the best of circumstances.

Given that Syria is in the midst of a brutal civil war, the notion that it is possible for UN inspectors to remove or destroy the regime’s chemical weapons is patently absurd.

Moreover, since the agreement itself requires non-compliance complaints to be discussed first at the UN Security Council, and it is clear that Russia is willing to do anything to protect the Syrian regime, no action will be taken to punish non-compliance.

Finally, like his predecessors with regard to Pyongyang, Obama has effectively accepted the continued legitimacy of the regime of Bashar Assad, despite the fact that he is an acknowledged war criminal.

As was the case with Pyongyang and its nuclear brinkmanship and weapons tests, Assad won his legitimacy and removed the US threat to remove him from power by using weapons of mass destruction.

As for Iran, Rouhani’s talk of closing Fordo needs to be viewed against the precedents set at Yongbyon by the North Koreans. In other words, even if the installation is shuttered, there is every reason to believe that the shutdown will be temporary. On the other hand, just as North Korea remains off the State Department’s list of state sponsors of terrorism despite the fact that since its removal it carried out two more nuclear tests, it is hard to imagine that sanctions on Iran’s oil exports and central bank removed in exchange for an Iranian pledge to close Fordo, would be restored after Fordo is reopened.

Like North Korea, Iran will negotiate until it is ready to vacate its signature on the NPT and test its first nuclear weapon.

The critics are correct. And the danger posed by Obama’s decision to seek a false compromise rather than accept an unwanted confrontation following Syria’s use of chemical weapons will only be removed when the US recognizes the folly of seeking to wish away the dangers of weapons of mass destruction through negotiations. Those talks lead only to the diminishment of US power and the endangerment of US national security as more US enemies develop and deploy weapons of mass destruction with the sure knowledge that the US would rather negotiate fecklessly than contend responsibly with the dangers they pose.