Lying, the Palestinian formula for peace 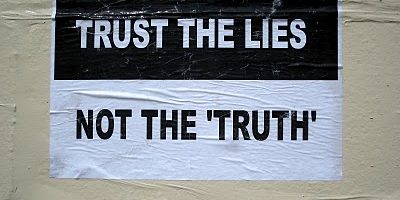 “Peace” talks.  “Peace” negotiations.  It is imperative that the people of Israel wake up and realize that there will never be peace with the Palestinians as long as there is a State of Israel populated by Jews.  The problem is not settlements or construction or small pieces of land in Israel. The real problem is radical Islam. Look at the chaos in the Middle East – Shiites fighting against Sunnis, Hamas fighting Fatah, Hezbollah fighting the rebels of Syria and it goes on and on.  So, why is there no peace?

There’s no peace because the Qur’an allows its adherents to lie to the “infidels” and “idolaters” whenever it furthers their cause and their religion.  Who are the infidels?  Any non-Muslim person fits the definition.  With this said, how is it possible to have peace negotiations with any follower of Islam when lying is viewed as a virtue and a justified means to an end?  In addition, peace is not their goal; their objective is war, destruction and the annihilation of Israel, no matter what they say at the negotiation tables and to the world.

In at least five previous peace treaties, the Palestinians failed to fulfill any of the conditions to which they agreed, yet the liberal media ignores this and consistently portrays Israel as the barrier to the peace process.  Nothing could be farther from the truth.  Remember when Israel gave control of Gaza to the Palestinians by unilaterally withdrawing and removing thousands of Israelis from their homes?  What did Israel get in return?  Israel received nothing but relentless attacks by Palestinian terrorists.  When Israel gifted Gaza to the Palestinians, the land was lush and productive.  The Palestinians showed their appreciation by destroying the greenhouses and poisoning the land by creating launch sites for rockets and missiles. Hasn’t any lesson been learned from all of this?

Zippi Livni at the “negotiating” table for Israel is laughable.  She is well known as a liberal who loudly supports the two-state solution.  It is almost like sending in another person to negotiate for the Palestinians.  How the Palestinians must love this.  Her approach to peace is not through strength but instead to give the enemy what they want in exchange for empty promises.  Appeasing the Palestinians by giving them what they want has not worked in the past and there is no reason to believe it will work now or in the future. Giving more land will only give them a closer launching pad for terrorist activities and their continuing war on Israel.  Furthermore, she will be deprived of her right to defensible borders. Giving in to her enemies will embolden them, because they view this as weakness, the same kind of weakness shown by U.S. President Obama.

Look at what is happening in America.  President Obama is a weak leader who has greatly diminished America in the eyes of the world.  He draws “red lines” and they fade into the sunset.  He waits to see which way the tide is going to turn before taking action, if he takes any action at all.  He has looked the American people in the eye and has made statements and promises that have not materialized. Despite the policy positions of the White House, the vast American majority stands with and supports Israel.

Fortunately Israel has a strong leader in Benjamin Netanyahu.  He recognizes the problems and untruths directed at Israel and he has demonstrated his readiness to stand firm in a position of strength. This writer believes that the red line Netanyahu established for Iran will not erode or fade but rather is etched in concrete. Netanyahu understands that strength is the deterrent Israel’s Arab neighbors understand and for her to be truly strong, her leaders must be united and on the same page.

In speaking recently with UN Secretary General Ban Ki-moon and the press, Netanyahu said that the root cause of the continuation of the conflict between Israel and the Palestinians was not settlement construction but the Palestinian refusal to recognize the Jewish state, regardless of boundaries.  The continual conflict preceded the establishment of a single settlement by half a century and when Israel rooted out all the settlements in Gaza, the attacks continued because of the Palestinians’ basic and firm opposition to the Jewish State. According to Netanyahu, “The real issue is how to get a demilitarized Palestinian state to finally recognize and accept the one and only Jewish State.”

Netanyahu also urged the UN Secretary General to look into what he said was abuse of the UNRWA camps in Gaza. In these so-called “peace camps” Palestinian children are being indoctrinated “into a culture of hatred and the ideas of destroying Israel.”  They are being brainwashed into believing that the Jews are the descendents of pigs and monkeys and that the Jewish State has no right to exist. How can there ever be any hope of peace when they are raising up a new generation of Israel and Jew haters?

Israel is the land of the Almighty God and those who come against her will be destroyed.  It is time to study the Biblical history of Israel and her people.  It is all there in the Bible written thousands of years ago… the disbursing of the people; the re-gathering of the people; the re-establishing of the state; the reclamation of the land; revival of the Hebrew language and the resurgence of the military.  It is all there in God’s Holy Word, the Bible.  The prophecy and the miracle of Israel is all there!  God promised Israel to the Jewish people. Upon the re-gathering to Israel He promised divine intervention on their behalf against all enemies.  Read the 3rd Chapter of Joel.  He has kept this promise ever since Israel became a state in 1948 and even as Israel struggled to become a state.

Israel, if God be for you, who can be against you?