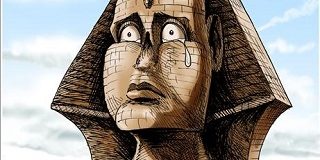 Now that the attacks on Egypt’s Christian churches have subsided, stage two of the jihad — profiting from the fear and terror caused by stage one — is setting in: reports are arriving that the Muslim Brotherhood and its supporters are forcing the roughly 15,000 Christian Copts of Dalga village in south Minya province to pay jizya — the money, or tribute, that conquered non-Muslims historically had to pay to their Islamic overlords “with willing submission and while feeling themselves subdued” to safeguard their existence, as indicated in Koran 9:29.

According to one priest from the area, all Copts in the village, “without exception,” are being forced to pay tribute, just as their forefathers did nearly 1400 years ago when the sword of Islam originally invaded Christian Egypt. He said that the “value of the tribute and method of payment differ from one place to another in the village, so that, some are being expected to pay 200 Egyptian pounds per day, others 500 Egyptian pounds per day…”

In some cases, those not able to pay have been attacked, their wives and children beaten and/or kidnapped. As a result, some 40 Christian families have now fled Dalga, becoming displaced.

It’s the same in Syria and Iraq. “Rebels” recently went to a Christian man’s “shop and gave him three options: become Muslim; pay $70,000 as a tax levied on non-Muslims, known as jizya; or be killed along with his family…. Androus from Mosul, Iraq, and another member of Father Raymond’s congregation, says he received a similar demand via telephone. ‘Because you are infidels, you have to pay jizya,’ he recalled being told over the phone. ‘Either you pay jizya, or we will kill you or your son.’”

Collecting jizya from non-Muslims was interrupted in the 19th century, thanks to European intervention. Today, the jizya and other injustices against Mideast Christians — in Libya, Egypt, Syria, and Iraq — have returned precisely thanks to Western intervention, in this case, U.S. support for the Muslim Brotherhood and its jihadi offshoots.