Thousands of Christian pilgrims expected for Feast of Tabernacles 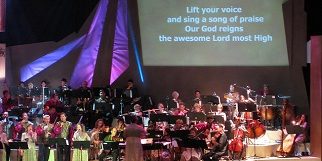 Despite the recent tensions in Syria, over 5,000 Christian pilgrims from nearly 100 nations will descend on Jerusalem for the International Christian Embassy Jerusalem’s annual celebration of the Feast of Tabernacles. The festival begins Friday evening (20 September) in Ein Gedi at the Oasis Hotel and continues to Jerusalem’s International Convention Center for the remainder of the week of Sukkot. The weeklong celebration is expected to generate $16 million in revenues, and is the largest annual tourist event to Israel.

“We are thrilled that thousands of Christians from all over the world will be arriving in Jerusalem this week to take part in our annual Feast gathering, despite the recent tensions in the region over the Syrian conflict,” said Dr. Jürgen Bühler, the ICEJ’s Executive Director. “Their visit to Jerusalem is a timely message of solidarity with the people of Israel.” According to David Parsons, the ICEJ media director, there have been no cancellations to this years event.

Many key Christian leaders from around the world will be speaking during the feast. Billy Wilson, Rene Terra Nova, Lance Lambert, Howard Flower, and Susan Hattingh are just a few of the notable pastors scheduled to speak at the celebration.

Several dignitaries will be addressing Feast participatns, including senior Israeli officials, representatives of the International Israel Allies Foundation,and top Jewish Diaspora leaders. Below is the tentative schedule of events.

The International Christian Embassy Jerusalem was founded during the first Christian celebration of the Feast of Tabernacles in September 1980 as a response to the last thirteen national embassies leaving Jerusalem under threat of an Arab oil boycott. Today, the Christian Embassy is considered the world’s largest pro-Israel Christian organization, with established branches in over 70 nations and a reach into more than 140 nations worldwide.