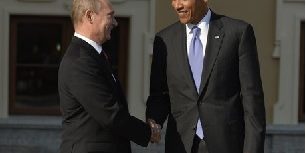 Russian President Vladimir Putin, while engaged in active cooperation with President Barack Obama over Syria, was not averse to going over his head to push his agenda with “the American people” in an article he published in The New York Times Thursday, Sept. 12.

He continues to protest against all the evidence that the calamitous chemical attack of Aug. 21, east of Damascus, was perpetrated by Syrian rebels, not the Syrian army.

This is clearly an attempt to turn the American people and its lawmakers once and for all against US military intervention in Syria in any shape or form.

If Putin succeeds in getting his message across, it would be the second time in a decade that Moscow has worked its will on the American people. The first time, the Russians aimed at discrediting the Bush administration by convincing the world ahead of America’s 2003 invasion of Iraq that Saddam Hussein had no weapons of mass destruction, although he was on record as having gassed 5,000 of his Kurdish citizens to death in 1988.

In his article, Putin went on to say sanctimoniously: “It is alarming that military intervention in internal conflicts in foreign countries has become commonplace for the United States. Is it in America’s long-term interest? Millions around the world increasingly see America not as a model of democracy but as one relying solely on brute force.”

The famously peace-loving Russian leader was lambasting an American president known for his extreme shyness of military action. Putin must be utterly confident that Obama is too far along their joint diplomatic path with Iran on Syria to back out now. He is evidently counting on a military attack being finally off the table and the Assad regime guaranteed safe.

debkafile’s military sources report that the Western military armada built up opposite Syria in the past two weeks was breaking up as the US president’s resolve for military action faded under relentless pressure from Moscow.

The British and French ships headed through the Suez Canal for the Red Sea Wednesday, Sept. 11, and the American vessels pulled back from Syrian shores to waters between Crete and Cyprus.

Obama has therefore caved in on his original intention of keeping the war armada in place – as heat for Assad to comply with the Russian plan for the elimination of his chemical weapons.

Every reputable chemical and military expert has advised the US president that there is no way that Assad’s chemical arsenal can be located and destroyed without importing an army of monitors long term for the job, and this can’t be accomplished while a civil war is raging in the country. Even if it becomes feasible, it will take years.

Meanwhile, the Syrian army is not waiting for diplomacy to run its course and Thursday, resumed offensive operations in the south, targeting Deraa and advancing rapidly towards the Syrian-Jordanian-Israeli border intersection.

The rebels’ morale is in the pits out of a sense of betrayal by the Obama administration and their resistance to the Syrian army’s onslaught is half-hearted at best.