Netanyahu: Message to Syria will be heard clearly in Iran 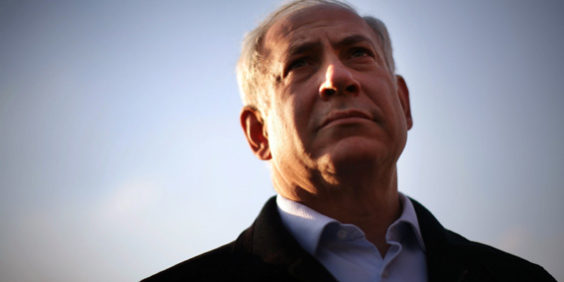 Ever since U.S. President Barack Obama surprised the world by seeking congressional approval for a military strike on Syria, concerns have grown among Israeli government officials in Jerusalem about a decline of America’s status in the Middle East and the implications for Iran’s nuclear program. No Israeli spokesperson has made an official statement on the issue, but on Wednesday Prime Minister Benjamin Netanyahu gave a hint of apparent Israeli dissatisfaction with American hesitancy in Syria.

“Not far north of here, dozens, and sometimes hundreds, of innocent civilians are being slaughtered on a daily basis,” Netanyahu said at a graduation ceremony in Haifa for Israel Navy cadets.

“Some of them have been killed with gas — chemical weapons. This is a serious crime, a crime against humanity.

“It now must be ensured that the Syrian regime will be disarmed of its chemical weapons, and the world needs to make certain that those who use weapons of mass destruction will pay the price for it. The message that Syria receives will be clearly heard in Iran.

“Today, the rule that has guided me in most of my actions as prime minister and to which I adhere very carefully is perhaps more valid than ever. If I am not for myself, who will be for me? If we are not for ourselves, who will be for us? And the practical translation of this rule is that Israel will always be able to defend itself by itself against any threat.”

At the same ceremony on Wednesday, Defense Minister Moshe Ya’alon said, “We don’t know how the Egyptian revolution will end or how Iran’s race toward nuclear weapons will be stopped. We don’t yet know how the free world will act in light of the massacres in Syria. We are monitoring events and developments responsibly and with sound judgment, with the understanding that ultimately we must rely on ourselves, on our strength and our deterrent capability.

“All we know is that we live in a reality in which instability is the only stable thing, and we must ensure to continue to navigate the ship with sturdy and safe hands through the stormy waters of the Middle East.”

With Netanyahu and Ya’alon looking on, President Shimon Peres said, “Led by Obama, the U.S. is demonstrating its moral and democratic weight and the strength of its military with its effort to bring about an immediate halt to the use of chemical weapons and their dismantlement. Anyone who tries to attack us will pay an unbearable price. Assad also knows that an attack on Israel would cost him a deadly price.

“Humanity’s rage over the coffins of children and infants did not influence Assad, but rather it was the military threat that forced him to accept the initiative to dismantle his chemical weapons. I know both President Obama and Putin, and I’m convinced that if an agreement is reached, it will be reliable, explicit and significant. The agreement must completely prohibit Assad from possessing chemical weapons.”

U.S. Ambassador to Israel Dan Shapiro said on Wednesday that the U.S. must utilize available diplomatic means to deal with the Syria issue. If diplomacy fails, Shapiro said, then military options must be used.

“The lack of an appropriate response to the chemical weapons attack by Assad on his people would increase the chances that chemical weapons would be used again,” Shapiro said. “Similarly, it would also increase the chances that such weapons would be obtained by terror groups and perhaps used against us, and also that other countries would get access to them.”

Meanwhile, a U.N. report published on Wednesday found that the Assad regime has committed at least eight massacres over the past year and a half, while rebels have been responsible for one. The report was compiled by a U.N. commission investigating human rights abuses in Syria since April 2012.

“Relentless shelling has killed thousands of civilians and displaced the populations of entire towns,” the report said. “Massacres and other unlawful killings are perpetrated with impunity.”