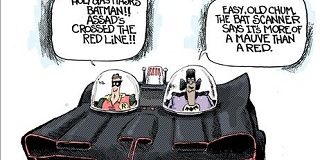 US president Barack Obama went against the words of his advisers, Secretary of State John Kerry and National Security Adviser Susan Rice Monday, and offered in TV interviews early Tuesday, Sept. 10, to “absolutely” put on hold military action against Syria, as well as the vote in Congress,  if Bashar Assad abandoned chemical weapons. He said he found some positive signs in the Russian proposal and said he was willing to run it to ground in the next few days to see if the Syrian issue can’t be solved without the military option.

“I welcome the Russian proposals and we will try and verify them,’ he said.

As for the decision in Congress, which was almost certain to vote down military action, Obama said that too could be put on hold. Because from the start there had been no imminent military threat to the United States, there was still time for “a good deliberation in Congress before a decision.”  It would take at least a week or a few weeks before Congress decides, and meanwhile “we can continue to talk to the Russians.”

“We know the capabilities of the Syrian army and that is no big problem for us,” he said.

In answer to a question, Obama admitted he had discussed the Russian proposal with Vladimir Putin last week at St. Petersburg (where they talked for 20 minutes on the G20 summit sidelines). He suggested then that the Syrian issue be approached in two stages: First, dispose of the chemical weapons problem, then move on to other issues of the Syrian conflict. Obama said he still believed the Syrian problem could not be solved militarily and would do everything to put the political discussions on the fast track.

Most Washington observers were critical of this latest Obama flip-flop, saying they received the impression from the interviews that the president had seized on the Russian proposal as a means of extricating himself from a major defeat in Congress.

In an unexpected turn of events along the road to a US military strike on Syria, Russian Foreign Minister Sergey Lavrov said Monday afternoon, Sept. 9  that he had urged Syria to hand over its nuclear arsenal to international control if that would stop an American attack. Moscow had lost no time in picking up the gauntlet thrown down by US Secretary of State John Kerry in London a short time before.

Asked if there were steps the Syrian president could take to avert an American-led attack, Kerry replied: “Sure, he could turn over every single bit of his chemical weapons to the international community in the next week — turn it over, all of it, without delay and allow the full and total accounting.”

The Obama administration had in this way given Bashar Assad a week to turn in his chemical weapons to an international team that would no doubt be put together by the US, Russia and the United Nations.

Syrian Foreign Minister Walid Moallem, who arrived in Moscow earlier Monday, was informed that the Kremlin expected a positive and expeditious answer from President Assad. Within the hour, he came back with a welcome for the Russian “proposal” to place his country’s chemical weapons under international control. But he said nothing about letting the arsenal be moved out of the country and destroyed , as both Lavrov and Kerry specified.

Sunday, debkafile reported that a secret US proposal had been presented to Assad and that negotiations were in progress on a deal for a way out of the crisis generated by the chemical attack east of Damascus on Aug. 21. The transfer of Syria’s entire chemical stockpile to international control was a part of that proposition.

Our military sources add that Assad was in no position to flatly rebuff the Russian ultimatum; only to try and maneuver and haggle to buy time. If Moscow stops the air corridor lifting military supplies to Damascus, the Syrian army will quickly run out of ordnance for fighting the rebels.