Turning point: Obama and Israel, the next three years 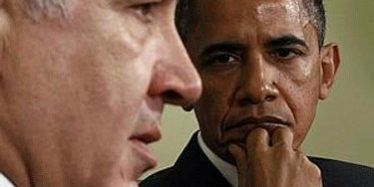 It is not every day that one can announce a shift in world history, but this day is today. And we are now in a new era in the Middle East and the world. This is not a joke-definitely not a joke-and as you will see, it is not an exaggeration.

Let me explain. For the last seven weeks I have been in the United States, mostly in Washington D.C. I have spoken and listened to many people. As a result, I am in a position to describe for you with a high degree of accuracy what the policy will be for the next 3.5 years, and perhaps for many more.

The administration has crossed a line to, in simple terms, backing the “‘bad guys.”

This is literally true in Egypt, Syria, Sudan, the Palestinian Authority, Bahrain (with its support for the opposition), Qatar, and Turkey.

And in some ways, as we will see, the war on terrorism has been turned into the war for terrorism.

Too extreme? On the contrary, this is not a conservative or liberal analysis but merely a true one. Come along over the next few weeks, and let’s take a serious analysis 0f Obama’s Middle East policy in the second term, from 2013 to January 20, 2017.

The real diplomatic line is: Bad boy, Bibi (and Israel), why can he/they not be moderate and flexible (unlike releasing 100 terrorist murderers in exchange for nothing), like Palestinian Authority Leader Mahmoud Abbas (and the Palestinians, who in fact is inflexible, constantly; escalates demands; and rejects U.S. strategy on the peace process); or like Turkey’s Prime Minister Erdogan (throwing intellectuals and journalists in prison, betraying U.S. strategy 0n Iran, backing anti-American Islamists, and sending former army officers for long jail terms on phony charges)?

During the coming months, and even years, if they are given to me, I will pursue these themes. You may not believe what you read here today or tomorrow, but you will, oh you will see it.

But before we begin, let me repeat that this is going to happen. It will not change, and as shocking as it is, this is already happening. It is unavoidable, because with a president who will not learn, a bought-off elite, a sold-out second-term Congress, and a remarkably cowardly or partisan media, nothing will change. The situation will only get worse and more obvious.
In this series of articles, I will describe eight very likely things that will almost certainly happen during the rest of Obama’s term, extending far beyond Israel, and how to minimize the harm to the interests of the United States and of its would-be Middle Eastern allied people and governments.

Here are the inevitable themes, any one of which would be horrid enough but note they can all be mitigated and delayed.

ISRAEL CANNOT DEPEND ON THE UNITED STATES.

That doesn’t mean that Obama and others will not provide military aid or say nice words at every event. But there is no commitment that one can assume would be fulfilled nor any Israeli initiative that will really be implemented.

This is a complex issue, but here are some brief points:

The idea that Obama and his team are the greatest friend of Israel is a deadly insult, and I can prove it two minutes.

Minute one: The United States has undermined Israel on many issues. Do I have to provide a list?
Okay, here is a partial list: Egypt (support for a hostile Muslim Brotherhood government); Tunisia (ditto); Sinai (enablement of insurgency); Hamas (the desire to keep the Brotherhood-an ally of Hamas-government in power in Cairo); Turkey (supporting the Islamist, anti-Israel government); Syria (support of radical Syrian Islamists); Europe (lack of support for Israeli position on peace process); America itself (encouragement of anti-Israel forces among Jewish community and in Obama constituency); Palestinians (lack of criticism or pressure on Palestinian Authority, PA). I’ll save more for later, but I think this is an impressive list.

Minute two: But, there’s something more here. The most dangerous, insulting argument is this: Secretary of State John Kerry has repeatedly said-and this is the theme of the administration supporters, including Jewish supporters: The greatest danger to Israel is if Israel does not get peace soon. This is an absurd lie. The greatest danger to Israel would be for Israel to accept a dangerous and unworkable peace agreement that the other side would not implement.

In other words, the greatest danger for Israel would be to listen to the bad advice of Obama, Kerry, and their supporters.
Consider this; who should be more knowledgeable about their situation and more aware of their real interests, Israel or America? Do people think that Obama knows better than Israelis? Does he care more? That’s absurd and insulting.
Of course, people assume that states and political leaderships put their own interests first, whether or not they understand this. And that lays the basis for overruling Israel’s democracy.

For example, a survey by the very dovish Israeli Democracy Institute (IDI) showed 65.6 percent of Israelis questioned did not expect to see a deal in talks between Israel and the Palestinians within a year. And if you take into the account the don’t-knows and no opinions, that increases the percentage.

Incidentally, spot the gimmick in Reuters’ story: “The talks resumed last month after a three-year hiatus.” Actually, except for one week there have not been real talks for 13 years.” Second gimmick: “But even if the Israeli government managed to defy skeptics and secure an accord, the poll…suggested it would struggle to sell it to its people.”

Wrong, the government and the vast majority of the people agree with each other. But there is a revealing hint here. The U.S. government and its supporters believe that the Israeli government in partnership with Obama should betray the beliefs, aspirations, and security of the Israeli people. And we are not only talking about Jewish settlements, even for those willing to give every one up for real, lasting peace.

In fact, 55.5 percent of the Israeli people-and 63 percent of Israeli Jews-said they were against Israel agreeing to return to the 1967 lines, even if there were land swaps which would enable some Jewish settlements in the West Bank and East Jerusalem to remain part of Israel. It is not the terms ostensibly offered, but the credibility of the United States and the Palestinians. Mind you, the figure is higher, because most people feel that this simply won’t work in terms of providing more security and stability.

You cannot understand what has just happened without the analogy of the monster movie. Israel is not naïve, but it was walking down a dark alley and thought that kindly old Uncle Sam-perhaps a bit grumpier lately-had his back; then it peered over its shoulder and froze in horror at seeing a scary monster. Yet you will never ever hear an Israeli politician admit that.
Read Netanyahu’s unprecedented memo on the talks and the prisoner release. It reads as if he saw a ghost; he is trying to signal something very grim and serious, and there is no implication that he believes in any possibility of compensation for this concession.

Faced with a wasted effort of an extremely unilateral Palestinian prisoner release, Prime Minister Benjamin Netanyahu’s government went along because they realized something in the middle: This was not a routine exercise. During the process, they realized that the indifference of the United States to Israel’s interests was extremely high; that Congress was hypnotized; that the Jewish community in its Obama worship was largely neutralized; and that rather than fighting European hostility, the White House was conducting it.

Looking over their shoulder in the misty night, they realized that a very large monster was following them. If you read Netanyahu’s unprecedented memo to the Israeli people as to why the terrorist prisoners were released, you get that clear signal. They realized that the Obama administration was extremely dangerous and that it was necessary to buy time.
Of course, the talks will not go anywhere, because the Palestinians know that they have a strong hand and they will overplay it. But the administration’s willingness to punish Israel to win public relations points and shore up the doomed U.S. alignment with Islamists has to be reckoned with.