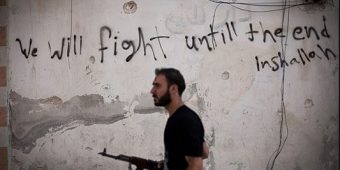 I’m sitting on my reclining chair looking out the window at the blue sultry August skies.  Nothing but peace and quiet in our little suburb north of Tel Aviv.

Yes, it is true that the most ghastly crime thinkable is taking place not far away.  Syria’s president is gassing his own people.  But at least that is 133 miles away.

On our southern border, the Muslim Brotherhood and Egypt’s military are battling it out.  Christians are under violent persecution by the Brotherhood.  But at least Cairo is 250 miles away.

Hamas in Gaza is trying to figure out what to do – now that they have lost their patron, the Muslim Brotherhood.  Not many rockets have been coming our way lately from Gaza.  Yes, they are not too far from us, but they are still 44 miles away.

Some Israeli analyst claims that Hezbollah to our north is in somewhat disarray at the moment – although they do have 70,000 projectiles aimed our way.  Bottom line is they probably won’t attack us right now.

Hezbollah’s immediate problem is that not all Lebanese are happy that Hezbollah’s army is fighting with Assad.  So the Lebanese are car-bombing each other.  And besides, Hezbollah is 95 miles away from Tel Aviv.

It’s true that the Sinai desert is heating up with Jihadists coming from Gaza, Libya and other Muslim nations.  But they are still 61 miles away.

The view out my window is still wonderful – trees and shrubbery grace my view.

But just now, there is another “Alert” in Hebrew on my iPhone.  It says, “U.S. and the U.K. lawmakers set to green light Syria attack.”

What’s more, last night the Israeli news announced that Assad promised that if Damascus were attacked, he would attack Tel Aviv.

And Iran chimed in.  They said they would also attack Tel Aviv.

And now the Israeli military chiefs are saying that yes, Hezbollah may actually be our most dangerous enemy.  As allies of Assad and Iran, they are shouting from the Lebanese housetops that they are coming after us.

Wow!  I wonder, will the real enemy stand up?

Most Israelis think they are bluffing.

I said, “most.”  However I have to add that in the last few days, Israelis aren’t taking any chances.  There has been a 400% rise in Israelis rushing to stand in long lines at government centers to get their gas masks.  Only 60% of Israelis have bothered to get them in the past, and now the Israeli government says they don’t yet have enough to go around.

Meanwhile Israeli TV news shows citizens cleaning out the public bomb shelters that have gone to pot because they haven’t been in use since the war with Hezbollah in 2006.

The pundits are all debating whether Israel will be attacked or not.  If Assad will gas his own people, why wouldn’t he try to gas the hated “Zionist enemy?”

Especially if he felt he was losing, wouldn’t he like to go out in a blaze of glory?

For some bizarre reason, this whole scene reminds me of a cartoon that was in our papers in 1991, the year Saddam Hussein lobbed 39 Scud missiles – mainly at Tel Aviv and Haifa.

It seemed very funny at the time.  However today, we will be able to watch any missiles hitting Tel Aviv or elsewhere – live on Israeli channels 10 and 11.  Or we can turn to CNN, Fox News, BBC or France 24.  At least as long as there is electricity.

As usual, there is no panic here.  Just sort of a stoic resignation.  Even though we have nothing to do whatsoever with the Syrian war… (except to allow a steady stream of badly wounded Syrian citizens brought over the Golan Heights border by the UN – in order to get them to an Israeli hospital).

But really, Israelis are a one-of-a-kind breed.  Just think if the citizens of New York or Chicago or Los Angeles or London or Paris were preparing for the real possibility of missiles reigning down on their homes.

As believers whose faith is entirely in Yeshua, I have no fear.  I only request that you pray for our nation’s safety.

We don’t deserve it at all.  But we cry for mercy.

Especially pray for the Messianic Jewish believers and the Arab Christians – that their faith not fail them and that they will stand up boldly and claim divine protection from our Heavenly Father against the enemies of Israel.

Pray that in this hour of danger, God will provide many opportunities for God’s born-again people in Israel to witness to the lost – and to touch that part of the Israeli soul which really does fear the future.

And don’t forget that we and many others are doing everything in our power to get the Gospel to our people – the one and only way to peace.  If you help us with your prayers and contributions, we can do even more.