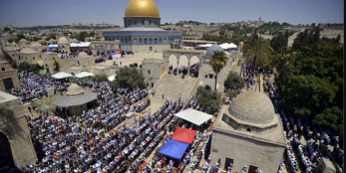 Eyewitnesses told Turkish media this week that a portion of the Temple Mount platform near the Al Aqsa Mosque has collapsed, creating a serious safety hazard and a possible threat to the stability of the Islamic structure.

If the report is accurate, it would be the second serious collapse on the Temple Mount in the past five years.

Palestinian officials claim that the collapses are caused by deliberate Israeli action to bring down the Al Aqsa Mosque and the Dome of the Rock so that the Jewish Temple can be rebuilt.

But archaeologists and engineers have been warning for years that the heavy construction projects being carried out by the Muslims atop the Temple Mount are destabilizing the huge number of ancient structures and water cisterns that riddle the sacred plateau.

Many believe it is only a matter of time before most of the platform collapses. And there are fears such a collapse could occur during Ramadan, when upwards of 100,000 Muslims gather atop the Temple Mount for weekly prayers.

Palestinians threaten violence over Jewish ‘provocations’ on Temple Mount
April 13, 2022
Is Palestinian incitement driving the tensions in Jerusalem?
May 11, 2021
Ramadan Violence Raging All Over Israel But Focused On Jerusalem
May 10, 2021
Jerusalem Day clashes continue amid celebrations, hundreds of rioters injured
May 10, 2021