Israel’s goal: Stay out of the fray 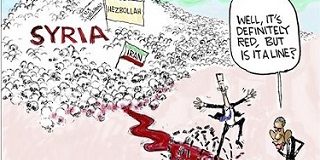 The general assessment in Israel on Saturday was that the period of American restraint over events in Syria was over. An American attack against Syrian government targets is expected sooner or later, although the scope of such a strike is unclear and officials in both Washington and Jerusalem think there is almost zero chance that American boots will be put on the ground.

America’s change of course in its policy toward Syria is a result of what seems to be the Syrian military’s massive use of chemical weapons against civilians last week near Damascus. The casualty numbers and horrific images coming out of the targeted areas left no other choice, even for the vacillating Obama administration and General Martin Dempsey’s stuttering military. This is the same president who refrained from responding after every red line he declared was brazenly crossed, and it is the same joint chiefs of staff that claimed it would be “impossible” to implement a no-fly zone over Syria — and these are now the people expected to act in contravention to their desires and put the U.S. army right back into a Middle Eastern war zone.

In Israel, officials think that in its first phase, at least, the American attack will be limited and focused (possibly against the precise Republican Guard unit that launched the chemical weapons), so as to avoid complicating the mission and because of the concern that a wide-scale strike will actually prompt Assad to unleash his unconventional weapons against his rivals (he might calculate that he has nothing to lose).

An important question must also be asked: How will Russia respond to the expected strike against its Middle Eastern protégé? American procrastination will allow Russia to pull its diplomatic levers in the United Nations and military levers in the Mediterranean Sea, which could alter the nature of the conflict into a direct clash between major blocs.

As far as Israel is concerned, the challenge will be to continue to stay out of the picture. The natural concern is that if its back is against the wall, Syria (or Hezbollah and Iran) could aim the shooting towards us as well. We should thus see tight coordination between Jerusalem and Washington, accompanied by American guarantees to protect Israel if it is attacked (as was the case in the first Gulf War).

The United States is also very interested in Israel’s intelligence information and operational experience in the Syrian arena, which, of course, is another reason for Dempsey’s impromptu visit to the region for the second time in recent weeks.

However, despite the heart’s desire for American intervention — culminating in Assad’s downfall — the head must wonder whether anyone (in Washington, Europe or Jerusalem) is really preparing for the day after Assad. The mess in Egypt and its fallout in Sinai require that serious thought on this matter be given now, lest the beast from the north also grow wilder.