Obama is a prisoner of his own agenda 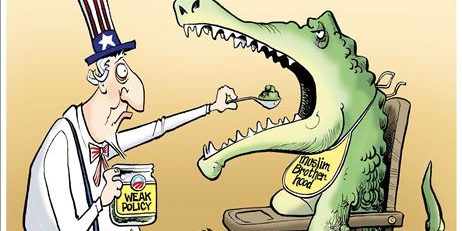 If the American President was not a prisoner to his own pro-Muslim Brotherhood agenda, the U.S. Administration would now be applauding the Egyptian military’s crackdown on the anti-Western, anti-Semitic and anti-Israel Muslim Brotherhood thugs who have instigated horrific violence in Cairo and throughout much of the country.

Indeed, his own agenda has resulted in untold bloodshed and a human rights meltdown in Syria, Iraq, North Africa, Afghanistan and Yemen. It threatens Jordan, Saudi-Arabia and the Gulf States while leaving Iran free to acquire nuclear weapons capability. And it imposes upon Israel a course which will inevitably lead to national suicide unless the Lion of Judah can finally awake and roar back.

The Egyptian military, acceding to the demands of some 33 million of its citizens to remove the Islamic and Sharia colluding Morsi regime, redeployed to end Mohammed Morsi’s Brotherhood supporters from their occupation of areas of the Egyptian capital. They were met by heavy gunfire and over 100 soldiers and police were killed in the first few hours of the confrontation.

Not surprisingly, Obama never mentioned this fact during his August 15th press conference; a long harangue during which, according to former UN Ambassador John Bolton, Obama predictably blamed not the Morsi rioters but the Egyptian military; again revealing this president’s egregious and systemic support for the Muslim extremists who wish to turn Egypt into an Islamic republic.

Nor did Obama castigate fully the pro-Morsi thugs who turned their savagery upon the hapless embattled Coptic Christian community. It is estimated that perhaps as many as 50 churches and Christian establishments were burned to the ground during the Muslim anti-Christian pogrom; this after Copts have been beheaded in the streets of Cairo. And still the Vatican and world Christendom remain in the main deathly silent.

For decades, ever since the secular revolution of Gamal Abdul Nasser in 1954, successive Egyptian presidents and governments have tried to crush the Brotherhood. This has been done by popular demand from the majority of Egyptians.

Obama’s threats against the military thus fly in the face of all reality. His actions will most certainly act against the best interests of the West and particularly of the United States. But there are many who believe that Barack Hussein Obama is on track to tactically do just that – harm America economically, politically and militarily – and not by incompetence, but by a planned and mendacious strategy. After all, did not Obama promise that he would fundamentally transform America?

During Morsi’s time in office, it should be remembered that sexual assaults against women skyrocketed. Islamic discrimination against women in Egypt under Morsi echoed the horrors perpetrated against females under the Taliban in Afghanistan. It encouraged genital mutilation among Egyptian women, opposed any moves to stop polygamy, and rejected any rights for women to have equality in the distribution of inheritance and assets.

And still, apart from a very few brave souls, the feminists around the world have remained deathly silent. And was there a word of censure by President Obama? Not one peep.

Remember, too, that the first public announcement Morsi made was to call for war against Israel and utter his vile insult – straight out of the Koran – equating Jews with monkeys and pigs.

But what did Obama continue to do in the face of the Muslim Brotherhood’s excesses? Why, he showered the Morsi government with F16 fighter bombers and 400 Abrams tanks – all, no doubt, weapons that eventually could be turned against the Jewish state.

According to the Middle East Media Research Institute (MEMRI): Egyptian cleric Dr. Khaled Said, in an interview aired on Al-Hafez TV (via the Internet) on March 17, 2013 described American foreign military aid this way:

“If the (Islamic) revolution declares a framework for dealing with the West and America – they will accept it, kiss our hands, and double the aid they give us. We consider this aid to be jizya , not regular aid. They pay so that we will let them be. The aid constitutes jizya.”

All non-Muslims living under Muslim control were forced over the centuries to pay the discriminatory jizya tax if they refused to convert to Islam. Thus American aid to the Morsi regime was considered just that by the Muslim Brotherhood.

According to a report by Debka, an intelligence organization which some commentators often respond to negatively, whether with good reason or not, “President Barack Obama put in a call to Egypt’s strongman, Defense Minister Gen. Abdel-Fattah El-Sissi, debkafile’s intelligence sources report. The US president wanted to give the general a dressing-down much on the lines of the call he made to former president Hosni Mubarak in February, 2011.”

The Debka report continued:  “Realizing what was coming, Gen. El-Sissi decided not to accept Obama’s call. The anecdote shows that the military strongman is not only determined to avoid the pitfalls which brought Mubarak down but is equally determined to keep the US Administration from interfering in his plans for driving the Muslim Brotherhood out of Egyptian politics.”

El-Sissi has a trump card that he will use against pressure from the Obama Administration. Saudi-Arabia has already begun to provide the financial support he needs to quell the Muslim Brotherhood, whom the Saudis loathe, as do several of the Gulf States. All this will create another self-induced foreign affairs nightmare for Obama as an ever-widening rift opens up between the rulers of the Gulf States, Saudi-Arabia and the White House.

Indeed, according to Debka, “Our intelligence sources also disclose that, while President Obama was trying to get through to Gen. El-Sissi, the general was on the phone with Prince Bandar, Director of Saudi Intelligence.”

Sadly, Israel, unlike Egypt, doesn’t possess alternate allies who can help buttress the Jewish state from hostile pressure from the Obama Administration; pressure which has forced the Netanyahu government to timidly accede to obscene demands from the Holocaust denying Chairman of the so-called Palestinian Authority, Mahmoud Abbas, and from U.S. Secretary of State, John Kerry, to release Muslim monsters with Jewish blood on their hands:  Next, to agree to enter into “piece” talks with the Jew hating thugdom, the PA, that currently occupies parts of biblical and ancestral Jewish Judea and Samaria.

Calls have been made by myself and others in the Opinion columns of Arutz Sheva for a push by Israel to create just such foreign alliances, perhaps with India or China. Israel might not be faced with such intolerable pressures from such a presidency as that of Barack Obama if thought had been given to such a strategy much earlier.

Notwithstanding the above, it would be a salutary admonition to the Netanyahu government to consider what Winston Churchill said during his fractious June, 1940 Cabinet discussions with then Foreign Minister, Lord Halifax. During those dark days, when the British Expeditionary Force (BEF) was trapped on the beaches of Dunkirk, Halifax had wanted to appease Hitler with peace overtures via Mussolini. Churchill withstood the appeasement pressure from Halifax and shot back with the following words:

“Nations which go down fighting, rise again; those that surrender timidly are finished.”

Victor Sharpe is a prolific freelance writer with many published articles in leading national and international conservative websites and magazines. Born and educated in England, he has been a broadcaster and has authored several books including a collection of short stories under the title The Blue Hour. His three-volume set of in-depth studies on the threats from resurgent Islam to Israel, the West and to Judeo-Christian civilization is titled, Politicide: The Attempted Murder of the Jewish State. www.amazon.com