The left and the Jews 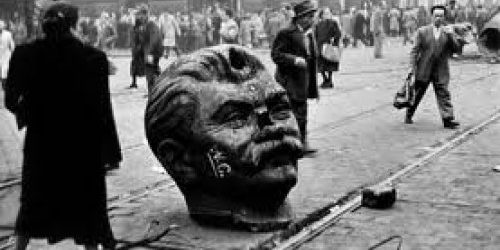 Almost sixty-one years ago, in November 1952, in Prague, the former secretary general of the Czechoslovak Communist Party, a diehard, fanatic Stalinist, Rudolf Slansky, and 13 other prominent communists, mostly Jewish, were sentenced to death for alleged treason and Zionist conspiracy.  At the same time, Stalin’s terminal paranoia led to the execution of the leaders of the Jewish Antifascist Committee, including celebrated Yiddish-language poet Peretz Markish, and the imprisonment of famous physicians accused of trying to poison Soviet leaders. Soviet Bloc media were filled with venomous anti-Semitic harangues. Had Stalin not died in March 1953, the doctors would have been executed, hundreds of thousands arrested, millions forcibly resettled. The likelihood of a gigantic pogrom, a Soviet-style Kristallnacht,  was looming large. The official terms for Jews was “rootless cosmopolitans.” Like in the National Socialist demonology, they were stigmatized as the driving force of the execrated capitalism, carriers of decadent values, agents of treason and dissolution. Even after Stalin’s demise, his successor Nikita Khrushchev continued to encourage anti-Semitic portrayals of Jews as mercenary individuals, speculators and “genetically” un-patriotic.

How was it possible for Bolshevik internationalism to degenerate into vicious anti-Semitism, similar to the worst propaganda excesses of the Black Hundreds in czarist Russia? Where did the promises of Marxist humanism, the dream of proletarian solidarity, irrespective of language and origin, vanish? Perhaps there was something in the secret grammar of leftist obsessions, in the underlying political fantasies of the Left, that explained these despicable outbursts of intolerance?

There is a genealogy of this depressing story, a line of ideas that sends us back to the origins of modern socialism and its hostility to money, banks, profit, and capitalism in general. Not only Marxism found its roots in that search for a pure, unpolluted natural community, but also the neo-romantic movements that lead to Fascism. A scrupulous and immensely erudite historian of modern political passions, including socialism, Zionism, and their counterparts at the extreme right end of the ideological continuum, Robert Wistrich (who teaches at the Hebrew University in Jerusalem), wrote a real treatise on the enduring anti-Semitic propensities among left-wing revolutionary movements. Published in 2012 by University of Nebraska Press,  “From Ambivalence to Betrayal: The Left, the Jews, and Israel” is must reading for those who want to understand the apparent paradox of the Left’s espousal of far-right conspiratorial, xenophobic delusions.

He shows how resentful ideas shaped the original socialist vision of Jews as promoters of capitalist instincts and vices. Even before the French Revolution, major Enlightenment figures expressed staunch Judeophobic attitudes. In France, Voltaire lambasted Jews as irretrievably tribalistic, whereas in Germany Hegel’s disciples regarded Judaism as a fundamentally reactionary religion, an obstacle to human emancipation. Another major German philosopher, Johann Gottlob Fichte, postulated the incompatibility between Germanness (racially defined), and Jews. From Fichte to Richard Wagner and to the genocidal prophets Alfred Rosenberg and Adolf Hitler, there was a line of morbid fixation on the Jews as a pathogenic factor, comparable to harmful insects whose liquidation could ensure the health of the popular community (Volksgemeinschaft).

One of the most adamant anti-Semites was Bruno Bauer, initially a close friend of Karl Marx, later his philosophical and political enemy. Marx himself maintained an ambivalent, often embarrassed and hostile, attitude to his Jewish origins. As a matter of fact, his early text on “The Jewish Question” portrayed Jews in most unflattering colors, seeing them as the embodiment of everything romantics loved to hate: selfishness, mercantilism, soullessness. In the young Hegelian’s view, Jews meant capitalism and transcending the Jewish question implied a proletarian revolution that would abolish capitalism and implicitly the Jewish condition. Its ugly anti-Semitic stances notwithstanding, Marx’s early article became a sacred text for left-wingers who tried to address the issue of Jewish emancipation and assimilation. They all borrowed from the founding father the conviction that Jews were the incarnation of capitalist injustice, identified them with soulless plutocracy, and called for an ultimate de-Judaization of society via the ultimate revolutionary apocalypse. For Marx, a classless society meant a society without Jews as Jews. His musings on the Jewish question were philosophically preposterous, morally reprehensible, and sociologically groundless.

The same fixation functioned in non-Marxist leftist circles, from Proudhon to Bakunin and other anarchists. Wistrich explores convincingly the affinities between the far left and the far right in terms of their shared opposition to a perceived Judeo-plutocratic conspiracy. The Nazis would further exacerbate this myth, incorporating it in a broader Weltanschauung that insisted on the need to oppose both Jewish capitalism and Jewish Communism. Logical paradoxes notwithstanding, these myths have persisted for decades. By the end of his life, Joseph Stalin was as convinced as Hitler that the house of Rothschild (or Wall Street as its latter day metamorphosis) was behind all world-historical events.

The demonization of the Jew as the symbol of the abhorred bourgeoisie coincided, within the Left, with the efforts by Jewish luminaries and rank-and-file members alike, to deny their roots. Think of such luminaries as Grigory Zinoviev, Lev Kamenev, Yakov Sverdlov, Rosa Luxemburg, Ruth Fischer, and the list is endless. Both “Red Rosa” and Lev Trotsky were born to traditional Jewish families, both did their utmost to overcome that heredity and convert to a supra-national, truly universalistic identity. Both advocated a Messianic doctrine of apocalyptic revolution. After all, Marx and Engels claimed in the “Communist Manifesto” that proletarians do not have a motherland. Why would they, Rosa and Leon, have one? They did not conceal their origin, but saw it as irrelevant for the much larger, more grandiose agenda of their revolutionary dreams. Did they really succeed?

Obviously, Jewish revolutionary internationalism failed. Both German and Russian socialists continued to see Jewish revolutionaries as tolerated individuals, rather than full-fledged members of the national parties. Veteran Social Democrats such as August Bebel and Frantz Mehring saw Rosa as an exalted, almost quixotic figure. In his struggle for Lenin’s mantle, Stalin did not hesitate to resort to anti-Semitic innuendo against his arch-rival Trotsky (whom he dubbed Judas) and other Jewish members of the Bolshevik Old Guard.  Publicly, at least in the 1930s, the vozhd (Leader) condemned anti-Semitism which he defined as a modern version of cannibalism. Privately, he unabashedly indulged in scurrilous anti-Semitic jokes.

The Romanian Stalinist Ana Pauker, the country’s Foreign Minister between 1947 and 1952, was first and foremost a soldier of the global communist movement. She remained loyal to the Bolshevik creed in spite of many terrible experiences, including the execution of her husband in the USSR, during the Great Purge, as a renegade and a spy. Ana Pauker was herself arrested for a few months in early 1953. When she found out that Stalin had died in March, she started to cry.

The rise of Zionism contributed the radicalization of leftist anti-Semitic prejudice. Furthermore, unable to predict the Holocaust (Trotsky was the sole notable exception), the Left remained attached to its outworn dogmas. The emergence of the state of Israel created a new reality that the left chose to either ignore or distort to the point of a grotesque caricature. Instead of the traditional identification with the underdog, the radical Left has decided that Israel represents capitalism at its worst, a new form of colonialism and even racism.

Echoing previous follies, some of those who champion these stances happen to be themselves Jewish. In some respects, it is as if people refuse to learn from history. Perhaps instead of people I should say intellectuals: a species made up of individuals more often than not seduced (and eager to be seduced) by the siren songs of utopianism.

In recent years, leftist biases, stereotypes and delusions regarding Jews, Judaism, and the state of Israel have grown and proliferated. Ironically, most of those who promote and advocate such bigoted, conspiratorial views have no idea that they are merely recycling Adolf Hitler and Joseph Stalin’s murderous visions of a world without Jews.