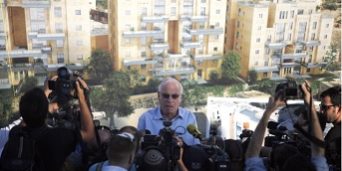 By ADIV STERMAN, TIMES OF ISRAEL—

Two days before the scheduled resumption of peace talks with the Palestinians, a diplomatic source said Monday that Israel secretly authorized construction of 900 new housing units in East Jerusalem.

The Housing Ministry later confirmed that additional permits for housing construction had indeed been issued. The new units will be built south of the West Bank Palestinian village of Beit Jala.

The news came a day after the Housing Ministry approved the construction of 1,200 apartments in settlement blocs and Jerusalem neighborhoods beyond the Green Line.

“We will continue issuing tenders for construction in Jerusalem and the settlement blocs,” the source said.

Speaking at a news conference in Bogota, Colombia, US Secretary of State John Kerry said Monday that he didn’t think the recent flap over Israeli settlement announcements will derail Mideast peace talks, which are scheduled to resume this week.

According to Kerry, the Israeli move was expected. The secretary said he talked about the announcements with the top Israeli negotiator. He added that the US government views the settlements as illegitimate and said criticism on the Palestinian side underscores the need to get to the negotiating table quickly.

Kerry is also trying to reach Prime Minister Benjamin Netanyahu, according to the Associated Press.

According to Channel 10 News, the Jerusalem Development Authority requested permits to begin construction at the site nine months ago, but the Interior Ministry only recently authorized the project.

The JDA is partly under the jurisdiction of the Prime Minister’s Office, which was unavailable for comment regarding the authorization.

Diplomatic sources quoted by Channel 10 News justified the construction approval, saying that while the Palestinian Authority demanded a settlement freeze as a precondition to peace talks, Israel did not accept such terms.

“Israel has never promised not to build,” the source said. The official added that the approved units were in a location which, Palestinians agree, will remain in Israeli hands even after the signing of any future agreement.

“We do not accept the legitimacy of continued settlement activity,” Deputy State Department Spokeswoman Marie Harf said Monday shortly after the news broke of the 900 new homes. “These announcements come at a particularly sensitive time and we have raised our concerns with the government of Israel.”

Harf would not characterize it as a “slap in the face,” but did say that Secretary of State John Kerry has stressed that both sides should refrain from taking actions that could undermine talks.

“We are moving forward with our plans. We have always said that this is going to be difficult and there are going to be bumps in the road,” added Harf, stressing that special envoy Martin Indyk is currently still meeting with both sides, and that both sides are still actively participating in talks.

Harf noted that the Israeli government is taking “a difficult and necessary step” in releasing Palestinian prisoners ahead of talks.

Kerry is currently on a visit to South America.

Senior Palestinian official Hanan Ashrawi Told the Times of Israel she learned about the decision from the Israeli media and that the move showed Israel’s total disregard for the Palestinians’ rights, the US to renew peace talks and the two-state solution.

“This decision is proof of Israel’s persistence and determination to derail the talks,” said Ashrawi. She did not indicate that the Palestinian Authority would take any steps in response to the announcement.

“Settlements in the occupied territories are illegal, they have been and they continue to be illegal,” his spokesman told reporters Monday.

“Germany is a friend of Israel,” said Netanyahu. “We both want the same thing — to achieve peace. We’re committed to peace and we’re working for peace. I have to say, on a sad note, that I think Europe — the European guidelines by the EU — have actually undermined peace.”

“They’ve hardened Palestinian positions, they seek an unrealistic end that everybody knows is not going to happen, and I think they stand in the way of reaching a solution which will only be reached by negotiations by the parties, and not by an external diktat,” the prime minister continued.

The new directives, to take effect at the start of 2014, require the EU and its members to cease any joint activity with — or funding of — Israeli entities working in the West Bank, East Jerusalem, and the Golan Heights.

The measures also require any future agreements between Israel and the EU to include a clause in which Israel accepts the European Union’s position that all territory over the Green Line does not belong to Israel — a requirement that is anathema to Israel.