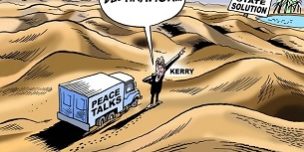 Standing next to US Secretary of State John Kerry on Tuesday morning, Justice Minister Tzipi Livni gushed that through his indefatigable efforts to bring Israeli and Palestinian officials to Washington, Kerry proved that “nothing can stop true believers.”

As usual, the cognitively-challenged Livni told us something she hadn’t intended to say. The term “true believer” was coined by Eric Hoffer in his classic work The True Believer from 1951, which Livni has obviously not read. Hoffer’s epic study of the psychological roots of fanaticism, described a true believer as a person so fanatically committed to a cause that no amount of reality can make him abandon it.

And that just about sums up Kerry, and the man he works for, US President Barack Obama.

Kerry visited Israel six times in the four months leading up to the meetings in Washington this week, during which Americans, Palestinians and Israelis discussed the size of the table they will be sitting around in the coming discussions.

During the same four months, the Syrian regime used chemical weapons against its opponents on multiple occasions. Most recently, they gassed Palestinians in Yarmouk refugee camp outside of Damascus, killing 22 people.

During those four months, al Qaeda strengthened its control over the Syrian opposition groups fighting the regime.

During those four months, the Syrian civil war became a focal point of a wider Sunni-Shiite religious war that has already spread to Lebanon and Iraq. In its post-US withdrawal role of Iranian satrapy, Iraq has allowed Iran to use its territory and airspace to transfer war materiel to the Syrian regime.

During those four months, the Obama administration decided to begin arming the al Qaeda-dominated rebel forces. It has also deliberately raised the risk of a Syrian-Israeli war by informing the media every time that Israel attacks missile sites in Syria.

Also during the four months that Kerry obsessed over convincing PLO chief Mahmoud Abbas to send his representative to Washington, Egypt experienced its second revolution in which, buffeted by millions of demonstrators who filled the squares of Egypt’s cities, the Egyptian military overthrew the US-supported Muslim Brotherhood regime.

The Obama administration was quick to jump onto the bandwagon of the first Egyptian revolution in January 2011. That revolution led to the military’s ouster of then president Hosni Mubarak, a staunch US ally, and so paved the way for the totalitarian and deeply popular Muslim Brotherhood to rise to power.

When the Brotherhood became subject to its own revolution due to its incompetent handling of Egypt’s failed economy and its single-minded focus on transforming Egypt into an Islamist state as quickly as possible, the Obama administration was confounded. Speaking to the Wall Street Journal this week, a senior administration official expressed complete befuddlement at events in Egypt. “None of us can quite figure this out,” the official said. “It seems so self-defeating.”

And that is the thing of it. In its support for the Brotherhood, the administration was implementing its wholly unfounded, dead-wrong ideological belief that the Muslim Brotherhood is a progressive, “largely secular” organization that is dedicated to good works. And now that the Egyptian military, supported by about half of the Egyptian people have rejected the Brotherhood, their actions are incomprehensible to the Obama administration.

In the face of massive documentary evidence, and facts on the ground, (Egypt has run out of food, and rather than get them some, overthrown president Muhammad Morsi rammed through a totalitarian Islamist constitution), the Obama administration still clings to its ideological belief that the Muslim Brotherhood is a positive, progressive, “largely secular” organization that is devoted to good works for the poor.

So too in Syria. The administration thinks it is okay to fund the Free Syria Army, because its leadership is dominated by the Muslim Brotherhood. Owing to the administration’s blind faith in its belief that the reason that the US is hated in the Muslim world is because it has opposed populist Islamist forces, Obama and his advisers think it makes sense to arm those forces in Syria now — so long as the Muslim Brotherhood is able to hide the fact that it is dominated by al Qaeda for a sufficient number of news cycles to sell this fiction to the media.

The administration’s faith in Islamist reasonableness holds for the Shiite Islamists just as strongly as it does for the Sunni Islamists. This is why it maintains its commitment to negotiating with Iran’s fanatical regime about its nuclear weapons program, despite overwhelming evidence that the Iranians are using the negotiations as a means to develop their bomb in peace.

This week David Albright and Christina Walrond at the Institute for Science and International Security in Washington published a deeply disturbing report. They explained that based on what we know, Iran will reached “critical capacity” in its nuclear program by mid-2014. Albright and Walrond defined critical capacity as “the technical capability to produce sufficient weapon-grade uranium from its safeguarded stocks of low enriched uranium for a nuclear explosive, without being detected.”

Albright and Walrond then explained the many ways Iran can speed up the process, and hide its achievement from the international community for long enough to make it too late to conduct military strikes on their nuclear facilities to prevent Iran from becoming a nuclear power.

In other words, they told us politely, and diplomatically, if urgently that we have arrived at the moment of decision. Will the US or Israel strike Iran’s nuclear installations to prevent it from becoming a nuclear power, or will Iran become a nuclear power? If we wait much longer, we won’t have sufficient time to act.

But for Kerry, and his fellow true believers the most urgent priority was to convince the Palestinians to sit in the same room as Israelis. And this week they scored a great victory for US foreign policy by achieving their goal.

In her brief remarks, not only did Livni inadvertently tell us that Kerry is a fanatic. She also told us that she is a fanatic.

Livni said, “t took more than just a plane ticket to be here today. A courageous act of leadership by Prime Minister Netanyahu that was approved by the Israeli Government made this visit here and the beginning of the negotiation possible.”

The “courageous act” she referred to was the government’s decision to release 104 “Palestinian prisoners” from Israel’s prisons. The demand for their freedom was the obstacle Abbas placed in the way of Livni acquiring her long sought after plane ticket to peace talks and five star receptions at Kerry’s Washington mansion.

The 104 “prisoners” are made up of Palestinians and Israeli Arabs. They are not car thieves or pickpockets. They are monsters with human faces. All 104 are serving life sentences for murder or attempted murder. Their crimes were gruesome acts of barbarism marked by demonic cruelty.

Yusef Said al-Al and Ayman Taleb Abu Sitteh stabbed David Bubil and Haim Weitzman to death and mutilated their bodies, cutting off their ears as souvenirs.

Three other “Palestinian prisoners” hacked four teenagers to pieces, killing them with pitchforks, hatchets and knives.

And the list goes on and on, and on.

And they endangered the country. According to Almagor Victims of Terror organization, from 2000-2500, 180 Israelis were murdered by Palestinian terrorists released by Israel in previous “deals.” And those terrorists had been imprisoned for non-lethal actions, (i.e., without blood on their hands).

The fact that Netanyahu and his ministers passed this decision simply to provide a sufficient payoff to Abbas for him to send Saeb Erekat to Washington to talk about nothing with Livni, makes their actions, not only craven, but insane.

Livni’s obscene characterization of this cowardly, life-threatening injustice as a “courageous act,” exposes her as well as a true believing fanatic. Only a fanatic could say such a thing.

In his remarks, Kerry said that the talks about the size of the table are going to bring about a situation where Israel will achieve, “not just the absence of conflict, but a full and lasting peace with the Arab and Muslim nations.”

Like Kerry’s demand that Israel free the terrorists, this statement bespeaks an underlying fanatical dementia. Regarding the “Arab and Muslim nations,” in Syria, neither the al Qaeda forces nor the regime have mentioned anything about putting down their weapons if Israel coughs up Jerusalem and Elon Moreh. The same goes for Hezbollah, Iran and their friends and enemies warring for power throughout the region.

As for the Palestinians, if they were interested in “lasting peace” with Israel, they wouldn’t demand freedom for terrorist murderers. Moreover, while Kerry was exulting in his brilliant success, Abbas announced that in his version of “lasting peace,” Jews will be wiped off of the map of Palestine.

As Abbas put it, “In a final resolution, we would not see the presence of a single Israeli — civilian or soldiers — on our lands.”

So again, while Kerry and Livni see rainbows and unicorns, Abbas sees a Jew-free Palestine, with the 600,000 Jews of Jerusalem, Judea and Samaria rendered homeless refugees to make room for his anti-Semitic fiefdom.

It is not surprising that Kerry, Obama, and Livni are going along with this obscenity. It is not surprising that fanatics who pray to the god of the two-state solution think it is courageous to free Jewish baby killers. It is not surprising they think the most important thing on the international agenda is to secure Israel’s surrender of land, our legal rights, and our ability to defend ourselves to a terrorist group that hates Jews so much they require all of us to be gone before they will do us the favor of accepting sovereignty.

What is surprising — and frightening — is that Netanyahu, who is not a true believer, and knows that they are true believers, is going along with this.

Netanyahu knows that Israel cannot survive without Judea and Samaria. He knows what the Muslim Brotherhood is. He knows the nature of the Iranian regime. He knows that the PLO is no different from Hamas. Their goal is the same — they want to destroy Israel.

Netanyahu knows that Obama is hostile to Israel and that he will not lift a finger to block Iran from becoming a nuclear power.

So why is he going along with their insanity?

The most important question for Israel today then is whether our leader is capable of being anything else.