A triumph for terror 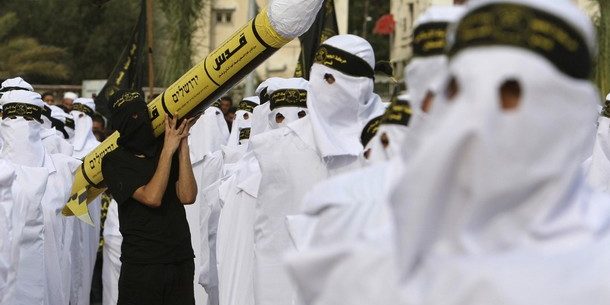 They murdered men and women because they were Jewish, stabbed 13-year-old kids and firebombed Israeli buses and cars. They hurled grenades at Israeli civilians, kidnapped, tortured and killed young soldiers, and assaulted and slew the elderly, including a Holocaust survivor.

These are just a few of the 104 Palestinian prisoners the government magnanimously decided to release on Sunday as part of the resumption of talks with the Palestinian Authority.

Chalk up yet another triumph for the terrorists.

Ignoring virtually wall-to-wall public opposition, as well as warnings from the security establishment, the government voted by a wide margin to yield to Palestinian demands and let murderers go free. What a disgrace.

Among those reportedly set to be released are Muhammad Jaber Nashabat and Ahmed Said Damouni, Palestinians who brutally murdered Amnon Pomerantz in September 1990. Pomerantz, 46, an electrical engineer on reserve duty, was driving in Gaza when he made a wrong turn and ended up in a refugee camp. A Palestinian mob surrounded his vehicle and began hurling stones at him until he lost consciousness. They then set his car on fire and celebrated as Pomerantz burned alive.

And now, thanks to the Israeli cabinet, Nashabat and Damouni will soon have further reason to celebrate.

Also slated for freedom is Issa Abd Rabbo, who slaughtered a young Israeli couple that was on a hike outside Jerusalem in October 1984. After tying them up and covering their heads, Abd Rabbo shot them both, execution style, at point-blank range.

And then there are the two Palestinians who firebombed an Israeli passenger bus on October 30, 1988, murdering Rachel Weiss and her three young children along with David Delarosa, a soldier who attempted to rescue the Weiss family.

Another soon-to-be ex-prisoner is Salah Ali Hader Razeq, who stabbed 64-year old historian and winner of the Israel Prize Professor Menachem Stern to death on June 22, 1989.

Let one thing be clear: the government’s decision is morally reprehensible, politically short-sighted and diplomatically dim-witted. It sets an abysmal precedent: Israel has agreed to pay a fee for the right to negotiate with its enemies, something that for months the government had said it would never do.

Just imagine how we would react if the German, French or Russian governments chose to allow the murderers of Jews to go free. Such a move would be universally denounced throughout the Jewish world as a grave injustice, and rightly so. There is no reason why the Israeli government should not be held to the same ethical standard.

Indeed, for 2,000 years, we waited for the day when those who harm Jews would be brought to justice and made to pay for their crimes. For a Jewish government in Jerusalem to set killers free is nothing less than a slap in the face to everything this country represents.

Regardless of where one stands about the wisdom of negotiating with the Palestinian leadership, I think we can all agree that releasing convicted terrorists is an affront to the victims and their loved ones. It undermines Israel’s deterrence, weakens the law and order upon which society is based and makes a mockery of our justice system.

In advance of Sunday’s cabinet meeting, Prime Minister Binyamin Netanyahu sought to justify the move by declaring that, “there are moments in which tough decisions must be made for the good of the country, and this is one of those moments.”

However the fact that a decision is tough to make does not in any way mean that it is correct.

In fact, back in 2001, Netanyahu himself wrote the following in his book Fighting Terrorism: How Democracies Can Defeat Domestic and International Terrorists (p.144): “Do not release jailed terrorists. Among the most important policies which must be adopted in the face of terrorism is the refusal to release convicted terrorists from prisons.”

Doing so, he wrote, “before they have served their full sentences,” will “only embolden terrorists.”

Those words were true back in 2001, and they are no less true today.

Every minister who raised his or her hand in support of releasing convicted terrorists this past Sunday, every one of them who spoke in favor of opening the jail cells and allowing the murderers to go free, will now be responsible for the carnage that some of these killers will inevitably inflict on the people of Israel.

We might have gained a few points in the eyes of Barack Obama and John Kerry this week by agreeing to let Palestinian murderers go free. But this came at the price of our sense of dignity and right versus wrong.

Shame on Israel’s government and shame on us all.