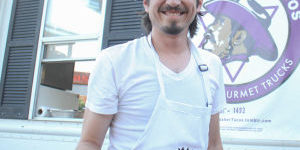 When you see a food truck selling kosher tacos on the border, you might ask, “Why kosher tacos?”

Artist Peter Svarzbein counts on the question, and he’s got an answer in the form of a food truck that doubles as a public awareness drive. The Conversos y Tacos Kosher Gourmet Truck visited two locations last week and will hit up two more this week: the Jewish Federation Offices on Thursday, July 25, and in front of Hello Day Cafe on Saturday, July 27.

The year 1492 is commonly known as the year Christopher Columbus set sail to find India (spoiler alert: he stumbled on the Americas), but it’s also the year that King Ferdinand and Queen Isabella ordered all Jews in Spain to either convert to Catholicism, leave the peninsula or face persecution.

Thousands who stayed were publicly shamed and burnt alive; those who converted are known as “conversos.” Many Sephardic (Spanish) Jews fled to the New World, and some scholars believe Columbus and other explorers were secretly Jews or had Jewish roots.

“Christopher Columbus signed his letters differently to the king than he did to his brother and father,” Svarzbein said. “He put Hebrew words in the upper right corner. Juan de Oñate’s grandfather was openly Jewish.”

In 2006, Svarzbein started photographing Latino families who believed they were descendants of conversos and decided to convert back to Judaism.

“My rabbi here in El Paso has converted about 100 families who believe they’re of this descent,” Svarzbein said.

Svarzbein came up with the idea of a kosher taco stand to spread awareness about this little-known piece of history – a combination that reflects the connection between Latinos and Jews. He teamed up with Hello Day Cafe chef Joe Cazares to come up with a kosher taco menu, while his friend Rabbi Juan Mejia made sure that kosher standards were kept.

Visitors can enjoy the tacos and watch a video sharing the stories of families that have converted back to their root religion.

“I have no desire to see somebody who is happily Catholic or atheist or whatever to come in and say, ‘Oh, I need to come back to my Jewish roots,’” Svarzbein said. “The success of the project will be if somebody can get a deeper appreciation of our culture and history. To leave and think, ‘I never knew that. I never thought of the Rio Grande being a source of refuge in life.’”