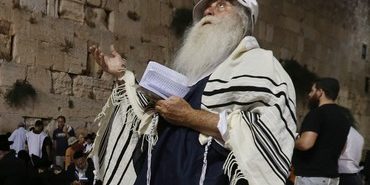 Tisha Be’av, Israel’s day of national mourning for the loss of the Holy Temple, is upon us. The Book of Lamentations, traditionally read on the evening of the fast, establishes the theme of the day: “For these do I weep,” or, in the words of Ray Charles, “It’s Cryin’ Time Again.”

For some, the day is truly filled with introspection and anguished reflection over the spiritual vacuum caused by the departure of the Divine Presence. For others, the day is symbolic of the many horrors that have been inflicted upon the nation throughout our history. Others question whether the day is still relevant at all, especially in the context of the modern State of Israel’s rebirth.

Those with even a minimal attachment to Israel’s tradition know that the Temple Mount is our nation’s uncontested and unparalleled spiritual center: past, present and future. The Torah teaches that the Holy Temple is the source of the elusive peace which we all seek so fervently: “For in this place I shall place peace” (Hagai); a vision of an unprecedented peace which will be enjoyed by all mankind: “They shall beat their swords into plowshares… for My house shall be called a house of prayer for all peoples” (Isaiah).

But it would seem that the more familiar reality is that of the Temple Mount today, all the more reason to cry.

Maj.-Gen. Motta Gur’s immortal words, “The Temple Mount is in our hands” may still be an emotionally charged, iconic statement, but it has practically no connection to the plight of the beleaguered Mount today. The Muslim Wakf’s deliberate, calculated campaign of destruction of Temple-era artifacts from the Mount – part of a larger attempt to divest Jerusalem of all Jewish history – still goes unchecked.

Despite numerous and repeated rulings of Israel’s Supreme Court, Jews (and all non-Muslims, for that matter) are physically prevented from exercising their guaranteed legal and basic right to pray at the site. Jews whose appearance marks them as observant are forced to identify themselves, another discriminatory and illegal procedure; they are separated, scrutinized, and singled out for derogatory treatment including body searches; they are warned that they must not pray or otherwise express any religious sentiment, and on the Mount – lest they attempt to pray – they are guarded and prodded like unwelcome guests.

A recent highly-publicized survey indicates that more than 60 percent of Israelis believe that the Western Wall – which has no intrinsic spiritual significance – is the holiest site for the Jewish people. But approximately 1,000 Jews of all backgrounds and orientation do visit the Temple Mount each month in strict accordance with Torah law, and the numbers are on the increase.

These visits require preparation and self-sacrifice that are the hallmark of great personal dedication. In the name of all of Israel, these individuals are struggling to win the basic human right to pray peacefully; a right enshrined and proudly ennobled by Israeli democracy for its minorities, but somehow deemed inapplicable to Jews at their holiest site. For a Jew to visit the Temple Mount and attempt to pray there is an exercise in submission and humility.

Yet without exception, every media report of these Temple Mount visits employs the most inflammatory rhetoric.

The Temple Mount, and how much more so, an expressed desire to see the rebuilt Temple, is taboo. The Jewish visitors to the Mount are not merely marginalized; they are consistently described in the harshest of sweeping terms, irrespective of who they are or what they really stand for.

They may hail from Tel Aviv or Ra’anana but they are invariably labeled “settlers” and “right-wing extremists.”

The site itself is constantly referred to as a “powder keg” or “tinderbox”; in short, it’s a doomsday scenario, with these irresponsible, troublemaking Jews bringing the world against Israel and waving a red cape in front of the charging bull of World War III.

Politicians and even rabbis pontificate about how Judaism respects others and how we have to respect the religious values of others, and refrain from ascending. But they go to great lengths to avoid recognizing that the Temple is so central a theme of Judaism that it comprises 202 of the 613 mitzvot… fully one third of the Torah. And herein lies the great irony behind the popular misconception of the “Temple Movement”: Our desire to see a rebuilt Temple is an expression of healthy, normative Judaism.

To label a desire to visit the Temple Mount as “dangerous” and “radical” is to ascribe those appellations to normative Judaism. As far as the Torah is concerned, the Holy Temple is as mainstream as you can get. The concept of what the Holy Temple brings to the world, and thus why the Temple Mount is so important to the Jewish people (and to the Jewish people’s sense of global responsibility), goes far beyond issues of sovereignty.

This is not a cult of nationalism, and it certainly isn’t about real estate. Normative Judaism maintains that the Holy Temple is the secret of mankind’s survival.

It is the rectification of relationships – not only our relationship with God, but our connection with each other, with all people, and with all of nature.

As part of our efforts to re-frame the period of mourning and give hope for the future, the Temple Institute produced a highly successful viral video last year entitled The Children are Ready. Set on a beach far away from the Temple Mount, young children surprise their father by building a sandcastle in the shape of the Holy Temple.

Even these innocent children sparked harsh rebuttals from inside the Jewish community and beyond. This year our sequel to this video focused directly on Jews mourning in the synagogue. Tisha Be’av 2013: The Children are Ready II questions the ongoing ritual of mourning simply for the sake of mourning, without truly contemplating how the cycle will end. This too has been widely circulated but its innocent message has already been rejected by many that seek to sweep the promise of the Holy Temple under the rug.

Tisha Be’av was not intended to be a day of perpetual mourning, but rather, as a bridge to the future. To anticipate the rebuilding of the Holy Temple, and to visit the site of the Temple Mount, is a reflection of the innate spiritual purity of the collective body of Israel. There can be no greater expression of the collective – normative – Jewish soul, than the desire to see the Temple become a reality.

Why must this expression of innocence be labeled as dangerous or inciteful? Why should others be afforded the opportunity to express their most heartfelt religious desires openly and freely? Is that what it’s come down to in the modern State of Israel? It is forbidden for a Jew to dream? Has the Temple truly become taboo? If this is indeed the case, then for these do I weep.

Through its research and educational programming, the institute seeks to highlight the universal significance of the Holy Temple as a house of peace and prayer for all nations.