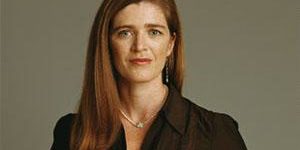 In selecting Samantha Power as his nominee for United Nations Ambassador, President Obama has chosen an appointee whose stated positions are detrimental to promoting a strong American foreign policy and would weaken the position of one of our strongest allies, Israel.  She also seems to have a temperament that is not especially suited to diplomacy.  (Just ask Hillary Clinton.)  Yet, despite her many flaws, politically attuned observers still confidently predict that Ms. Power will win Senate confirmation.

How so?  Well, she intends to follow the Chuck Hagel method of winning Senate confirmation – she will reverse, apologize for, explain away, and/or deny her record.  Power has already started this process.

The premiere example is her response to the “thought experiment” on the Israeli-Palestinian conflict.  In 2002, Samantha Power was asked: “Let me give you a thought experiment here …without addressing the Palestine – Israel problem, let’s say you were an advisor to the President of the United States, how would you respond to current events there? Would you advise him to put a structure in place to monitor that situation, at least if one party or another looking like they might be moving toward genocide?”  She answered:

…what we need is a willingness to put something on the line in helping the situation. Putting something on the line might mean alienating a domestic constituency of tremendous political and financial import; it may more crucially mean sacrificing — or investing, I think, more than sacrificing — billions of dollars, not in servicing Israel’s military, but actually investing in the new state of Palestine, in investing the billions of dollars it would probably take, also, to support what will have to be a mammoth protection force, not of the old Rwanda kind, but a meaningful military presence. Because it seems to me at this stage (and this is true of actual genocides as well, and not just major human rights abuses, which were seen there), you have to go in as if you’re serious, you have to put something on the line.  Unfortunately, imposition of a solution on unwilling parties is dreadful. It’s a terrible thing to do, it’s fundamentally undemocratic. But, sadly, we don’t just have a democracy here either, we have a liberal democracy. There are certain sets of principles that guide our policy, or that are meant to, anyway. It’s essential that some set of principles becomes the benchmark, rather than a deference to who are fundamentally politically destined to destroy the lives of their own people…I do think in that sense, both political leaders have been dreadfully irresponsible. And, unfortunately, it does require external intervention.

During the 2008 presidential campaign, when Power was advising then Senator Obama, this hypothetical answer began to attract critical comment, so Power completely disavowed it: “Even I don’t understand it.  This makes no sense to me. The quote seems so weird.”

Similarly, besides the above answer, she has addressed other concerns vis-à-vis her views of Israel.  Power has claimed that the Israeli soldiers committed “war crimes” in fighting Palestinian terrorists in Jenin, despite that no such crimes occurred.  She has implied that the Israelis are paranoid and are bastards.  She has written that by backing Israel, the U.S. has lost its right to discuss human rights to the rest of the world.  Power has even blamed Israel for instigating the U.S. invasion of Iraq.  But, in 2011, in a private meeting with American Jewish groups, Ms. Power explained away any anti-Israeli bias on her part, claiming that she had been “misunderstood” and “falsely accused.” Further, she became so “deeply emotional” that she “struggled to complete her presentation as she expressed how deeply such accusations had affected her,” and finally burst into tears, prompting all of those in the room to be “deeply moved by this incredible display of pain and emotion.”

Apparently, these simple disavowals of her previous record are enough for some people to wipe the slate clean for Power.   And apparently, since her nomination for U.N. Ambassador, Ms. Power has been, and will be, continuing this process of “personal evolution” through her meetings with U.S. Senators and her eventual nomination appearance.

So, we can probably expect more reversals of, apologies for, explanations for, and/or denials of, her record. In the interest of assisting this “evolution” I’ve proposed some options for Ms. Power to select from while explaining away her record. For example:

• In 2003, in a New Republic article, Power made a number of statements expressing her belief that the U.S. has, in the past, sinned in its conduct of foreign affairs and needed to apologize.  She may address any complaints about these comments in the following manner – “So sorry about that.  My bad.” (Some tears or sighs might also be appropriate.)

• In a 2008 TIME Magazine column, Power derided concerns about Iran’s nuclear weapons program as a figment of the imagination conjured up and promoted by former President George W. Bush.  If questioned about this, she can say, honestly: “Iran has made real strides in five years.” She doesn’t have to mention that these strides have been towards nuclear weapons.

• In a 2008 article in the New Statesman, Power expressed her politically correct concern about linking the religion of Islam and terrorism.  “All we talk about is ‘Islamic terrorism’.  If the two words are associated for long enough it’s obviously going to have an effect on how people think about Muslims.” Actually, there is no need for Power to disavow this statement, considering the Administration she would be serving in.  At her hearing, if pressed, she might further explain, “The real problem, as we all know, is excessive workplace violence.”

• In a 2008 radio interview, when Power answered concerns regarding Barack Obama and his views towards Israel, she stated, “So much of it is about: ‘Is he going to be good for the Jews?”  A further clarification of this statement might be warranted.  Perhaps she might say, “My appointment is good for the Jews.  Did you know that I am married to one?”

This kind of strategy will likely get Samantha Power through the U.S. Senate.  Whether it will serve our nation at the United Nations, a place where the United States faces determined foes and where political debates have real consequences, is another question entirely.