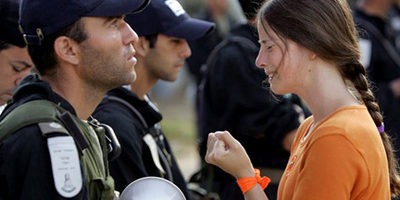 For us in the Judea and Samaria, and for many in all of Israel, the disengagement is not only the story of the destruction and forced transfer of Jewish communities, or even the story of 8,000 personal tragedies. In retrospect, Gush Katif is the story of how a whole nation was led by a corrupt political leadership down the slippery slope of propagating and believing in a false and deceiving agenda which we all know as “land for peace.” This seemingly innocent and pervasive idea of “land for piece” has been embedded in our collective consciousness as beyond question. However, when you forfeit Jewish national rights and Jewish sovereignty, you get no peace. What you get are missiles, thousands of them hitting major cities throughout Israel. You get two wars with close to 150 soldiers and civilians killed and thousands wounded. You get terror. The disengagement, despite the many warnings by political leaders on the Right, resulted in one of Israel’s greatest strategic blunders.

What are the implications for tomorrow? What can we learn so as to avoid making the same mistake again and again? This is the single most important lesson that we can learn from the tragedy of Gush Katif.

Around 1980, an author by the name of Tofler wrote a book that has become a prophetic milestone, called the “Third Wave”. He used this original term to describe an expected fundamental change in Western civilization similar to the Industrial Revolution, Tofler used this term to describe the imminent revolution by the PC and the Internet. I want to adopt Tofler’s term of the “Third Wave” to describe the implications of our perceptions on the future of Judea and Samaria, the historical and biblical heartland of Israel.

Over the past two years, we in Judea and Samaria have succeeded in implanting the “settlers” and the “settlements” into the public’s minds and hearts, including the new shapers of public opinion—bloggers and journalists from Israel, hundreds of foreign journalists stationed in Israel, politicians, radio and TV broadcasters, and celebrities. Tens of thousands of Israelis have visited and toured Judea and Samaria. Tens of thousands of supporters from abroad, Jews and Christians, supporters of Judea and Samaria, have visited to experience first hand the modern day builders of Zion. Senior journalists have been invited to become acquainted with the revivers of Zionism—the “settlers”. This program has been a resounding success and is “opening a window” by forging personal acquaintances and heart-to-heart talks with settlers who make an honest living and raise their children to live and love Eretz Yisrael, without apologizing for living and prospering in the heartland of Israel, Judea and Samaria.

These same visitors return home from their visit full of good impressions. The natural inclination to report on the settlers through the prism of politics exclusively becomes uncomfortable after seeing that the reality is much more complex. The reality is so very different than what has been reported, from what they have believed and been taught to believe to be true prior to participating in this eye-opening and mind-opening experience. These visitors have breached the gap and have seen, heard and experienced the true narrative of Judea and Samaria.

They are given a bird’s-eye view and explanation of the strategic significance these hills and mountains have for the center of Israel. They are reminded that in the event of a mass evacuation of the greater Tel-Aviv area, the residents of the center of Israel will be brought to a safe haven in Judea and Samaria. What seemed an impossible reality for Jews living beyond the green line is in actuality not so different from the towns that they themselves reside in. For once, they feel more common denominators transcending the worn-out and obsolete tags that sustained nothing more than hatred of fellow Jews. The result of this experience strengthens the understanding that Jews are no strangers to Judea and Samaria.

This “Third Wave” has brought to the minds and hearts of many in Israel and throughout the world that Judea and Samaria must remain the heartland of Israel. This “Third Wave” will mobilize all of us to internalize the understanding and the belief that Gush Katif can never be repeated again. For, whoever agreed to the destruction of Gush Katif will agree to forfeit Judea and Samaria. And whoever agrees to forfeit Judea and Samaria will agree to forfeit Jerusalem. And whoever agrees to forfeit Jerusalem will forfeit any justification and rationale for the existence of the State of Israel. This is the true legacy and meaning of Gush Katif. This is the significance of understanding why there can never be a second Gush Katif. For this reason alone, every year, the tragic story of Gush Katif and the 4 communities of Northern Samaria must be told again and again, and become firmly embedded in our collective consciousness, so that it may never, with G-d’s help, never happen again.

The author is a 25-year veteran of the Israel Defense Forces, serving as a field mental health officer.  Prior to retiring in 2005, served as the Commander of the Central Psychiatric Military Clinic for Reserve Soldiers at Tel-Hashomer. Since retiring from active duty, he has been providing consultancy services to NGO’s implementing Psycho trauma and Psycho education programs to communities throughout Israel. Today, Ron serves as the Strategic Advisor at the Office of the Chief Foreign Envoy of Judea and Samaria    To contact:  medconf@netvision.net.il