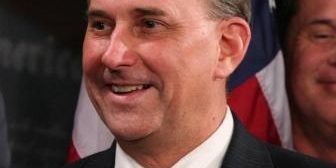 Louis Gohmert, a Christian member of the United States Congress, spoke to Arutz Sheva regarding American efforts to jumpstart the peace process, Jewish biblical rights to the land of Israel, and the united support of U.S. members of Congress for the Jewish state.

“You can search the history of Israel and I don’t believe you’ll ever find a time when Israel has ever—going back to its inception—given away land trying to buy peace that that land was ultimately used as a staging area to attack it,” said, Gohmert, a Republican Representative from Texas’s First Congressional District.

“One thing should be very clear: Israel should never and will never buy peace by giving away land,” he told Arutz Sheva.

Gohmert notes that the biblical prophecies from thousands of years ago are coming true.

Whether one believes in G-d or not, he said, the history recounted in the Torah teaches us that the Land of Israel belongs to the Jewish people.

Commenting on the situation in the Palestinian Authority, Gohmert said that while the PA continually incites hatred against the state of Israel and Jewish people, it refuses to take concrete steps to better the lives of its own people.

Regarding discussions of a possible prisoner release, Gohmert said, “You don’t release killers as an act of peace. They will likely kill again.”

“That is not helpful to peace,” he told Arutz Sheva.

Israel should not be considering releasing prisoners, but should start by urging the PLO to change its textbooks to stop teaching hatred of Jews and to stop naming streets and cities after terrorists who kill Israelis, he said.

Gohmert added that he had been pushing for over a year for Prime Minister Binyamin Netanyahu to come to speak to the United States Congress because he wanted the world to see that while the leader of Israel may “get snubbed” by the administration and State Department, Congress stands unanimously in support of the Jewish state.

Echoing the words of Prime Minister Binyamin Netanyahu in his address before Congress, Gohmert noted the truth in the words: “If Israel lays down its weapons, there will be no Israel. If the Palestinians lay down their weapons there will be peace.” He further stated his opposition to President Barack Obama’s nomination of Samantha Power for the post of U.S. Ambassador to the United Nations.

Powers “disregard and disdain” for the state if Israel has been made extremely clear, he said.