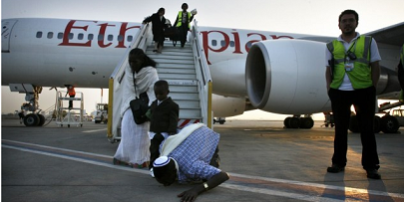 The Jewish Agency is preparing to end mass aliya from Ethiopia with two final flights consisting of 400 immigrants on August 28.

The Jewish Agency emissary to Ethiopia, Asher Seyum, made the announcement in a brief letter, saying the Jewish Agency will hand over its aid compounds in the Ethiopian city of Gondar to local authorities at the end of August.

For years the compounds — originally established by the North American Conference on Ethiopian Jewry and only recently taken over by the Jewish Agency — provided thousands of Ethiopians waiting to immigrate to Israel with educational, nutritional and some employment services.

Once the final flights are complete, Ethiopians wishing to immigrate to Israel will be subject to the same rules as potential immigrants from elsewhere in the world and considered on a case-by-case basis, a New York-based spokesman for the Jewish Agency told JTA.

A steady trickle of approximately 200 Ethiopian immigrants per month has been coming to Israel since 2010, when the government decided to check the aliya eligibility of an additional 8,000 or so Ethiopians.

The petitioners are known as Falash Mura — Ethiopians who claim links to descendants of Jews who converted to Christianity generations ago but who now seek to return to Judaism and immigrate to Israel. They have been accepted to Israel under different rules than those governing other immigrants.

The Israeli government has declared an official end to mass Ethiopian immigration several times. Each time, however, aliya from Ethiopia resumed after pressure by advocates.

In August 2008, for example, the Israeli government declared mass Ethiopian immigration over only to reverse course several months later and agree to check the aliya eligibility of 3,000 additional Ethiopians.

Prime Minister Benjamin Netanyahu said in May 2009 that those would be the last Ethiopians to be checked en masse, but that decision was reversed in 2010, opening the door for this latest group of immigrants.

Calling the decision to end Ethiopian aliya “sensitive and complex,” Seyum, the Jewish Agency emissary, acknowledged pressure from the Ethiopian community in Israel for the aliya to continue but said he was bound by the government’s decision to end it.

Under his implementation of the government’s 2010 decision, Seyum said, more than 6,500 Ethiopians have immigrated to Israel.