Islamic mandate: their way or no way 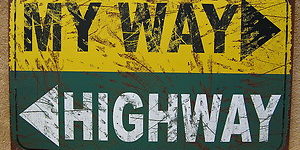 There are many religious and political forums being held across America and around the world for the purpose of attempting to foster understanding, and create an environment of tolerance, between Christians, Jews and Muslims. I am definitely a proponent of the need to understand one another and I am particularly keen on the need to understand those who adhere to the Islamic faith.  In order for Christians and Jews (and the West in general) to safely co-exist with Muslims, we must possess more than a surface, or media-generated, knowledge of Islamic culture and ideology.  What I have observed coming from these forums thus far clearly indicates a failure to grasp even the basic principles essential to understanding the Islamic community which is rapidly closing in from all sides.

Western and Islamic thinking are quite opposite.

The Western world must shed its cloak of ignorance and wake up to this fact.  The concept of nationalism really does not exist in the Islamic world.  A Muslim’s only allegiance is to Allah. For example, a Muslim in Jordan would feel a closer bond to a Muslim in Afghanistan than to a fellow Jordanian who is non-Muslim.   Sharing the same country is not as strong a bond as sharing the same faith.

Word definitions are another important key to understanding foundational Islamic truths.  When a Muslim speaks the word ‘peace’ it is not with the same definition as when the same word is uttered by a Westerner.  Rarely, if ever, will a Muslim speak the word ‘peace’ without also uttering the word ‘justice’ in the same breath.  This is because the concept of peace, as defined by the West, does not exist for a Muslim. The closest we can come to an understanding of the Islamic definition of peace is the “absence of conflict” or “reconciliation,” and neither of these encompasses the fullness of the Western definition.  We often hear Muslims speak of ‘peace with justice.’ What, exactly, does this mean? For starters, the word ‘justice,’ as defined by Islam, can only be achieved when all submit to the rule of Allah.  When a Muslim speaks of ‘peace with justice,’ he or she is speaking of the ‘absence of conflict when all submit to the rule of Allah.’  Clearly this is not what the Western world is seeking to achieve through peace conferences and treaties yet this is exactly what Muslims are seeking and it is what we are failing to understand. Muslims make open declarations of this by carefully choosing their words because they know Westerners are naïve and ignorant, lacking understanding of what they are openly declaring.  We have failed to study the Islamic rule book and game plan and this is to our detriment.

The basic tenets of Islam are fairly easy to understand if people would only take the time to scratch the surface and understand that the Islamic world is not playing by the same set of rules as the Western world.  Misleading statements and outright trickery are perfectly acceptable instruments in the hands of Muslims.  In fact, Islam instructs its followers that is it perfectly acceptable to enter into treaties and negotiations with the infidel (that’s you and me and anyone who does not worship Allah), if the end result will further the Islamic agenda and that agenda is world domination.  In other words, the end DOES justify the means and this is opposite from what we in the West view as acceptable or honorable behavior.  In fact, we often say ‘the end does NOT justify the means.’ Again, we see opposites.  For a Muslim to agree to refrain from violence for some length of time, in other words, if they agree to an ‘absence of conflict’ with Israel or other non-Muslim country, the Muslim is not betraying his or her faith.  To have a period of time where there is an absence of conflict affords Muslims the opportunity to regroup, plan and re-arm.

Islam has been in a state of revival for a very long time and has been rapidly gaining followers in countries around the world.  It’s conceivable that Muslims currently number about a billion followers and it is estimated that Europe will soon have a majority Muslim population in only a few decades.  Already there is talk of incorporating Sharia Law, the strictest form of Islamic law, into the laws governing England. There have also been whispers of doing the same in certain communities in America.

It’s time, maybe long past time, for those who love God, the God of Abraham, Isaac and Jacob, to wake up before we are all forced to wear Burqas or Keffiyehs and find ourselves prisoners of Islam – a religion whereby it’s THEIR WAY OR NO WAY.