Rowhani at the helm 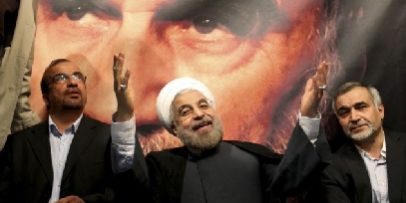 By BRIAN MURPHY, TIMES OF ISRAEL—

For a lesson in what Hasan Rowhani’s reformist-backed presidency could mean for Iran, a promise Sunday by the ultra-powerful Revolutionary Guard to cooperate with him is a good guide.

Like the rest of Iran’s ruling Islamic establishment, the Guard, which has kept a tight lid on any hints of opposition for years, is for the moment embracing Rowhani, even though he is almost certain to return once-silenced moderates into the political fold and restore the voice of liberal-leaning Iranians who danced in the streets after his stunning election victory.

The reason is because — in one of the more curious twists of Iranian politics — the opposition’s accidental hero Rowhani also may become a lucky charm for the ruling system.

His surprise victory allows the Islamic leadership to seek a bit of legitimacy among liberals and others who felt they exiled off the political map after the crackdowns following massive protests in 2009 over the disputed re-election of the now-exiting Mahmoud Ahmadinejad.

“They counted my vote!” some Rowhani supporters chanted in a mix of celebration and shock after the announcement of the results from Friday’s election.

Rowhani’s mild manifesto — sprinkled with words like “moderation” and “dialogue” — also could provide a honeymoon period for the leadership as a whole. Factions in Israel and the U.S. that have promoted military options against Iran’s nuclear program may find themselves in search of an audience with Rowhani playing the role of tension-easer.

The ecstatic outpouring of Iranians dancing and celebrating in the streets Saturday night and Sunday reflected the hopes that Rowhani can bring an end to the domination of hard-liners for the past eight years under Ahmadinejad, with arrests against the opposition and restrictions on rights. Many saw the win as a slap to the ruling clerics, sending a message that they cannot keep the opposition bottled up.

Rowhani does have a people-power mandate that certainly will be factored in by Iran’s rulers. But the scope of his win — more than three times of votes of the runner-up — doesn’t give him any extra-credit powers. Iran’s presidency is still without the tools to take any major initiatives without clearance from supreme leader Ayatollah Ali Khamenei or, by extension, the Revolutionary Guard.

The ruling clerics — not the president — hold all the cards in policymaking and make every make decision such as nuclear efforts, dealings with the West or Iran’s aid to its ally Bashar Assad in Damascus, who sent Rowhani a congratulations message Sunday that urged for the countries to remain united.

Rowhani had his first meeting as president-elect on Sunday, who offered “necessary guidelines” to Rowhani, state TV said, without elaborating.

In reaction to the positive vibes, Israeli Prime Minister Benjamin Netanyahu warned Sunday against being lulled by “wishful thinking” and urged for increased sanctions to rein in Iran’s nuclear ambitions. Some Israeli commentators have even joked — with a dash of truth — that Israeli hawks will miss Ahmadinejad as the best salesman for their policies.

The West and allies fear Iran could be moving toward a nuclear weapon. Iranian officials including the 64-year-old Rowhani — a former nuclear negotiator — insist the country’s only seek reactors for energy and medical use.

“With a moderate in as president instead of Ahmadinejad, Israel has to change its tone,” said Meir Javedanfar, an Iranian-born political analyst based in Israel. “The sell-by date of repeating the same line of ‘all options remain on the table’ has expired.”

The U.S. and other world powers, meanwhile, are likely to move quickly to restart nuclear negotiations, which have failed to make any headway after four rounds since last year. This sets up a potential quandary for Iran.

The current nuclear negotiator, Saeed Jalili, finished a distant third in the election and is something of Rowhani’s antithesis, insisting that Iran cannot give an inch to its foes. So far, Iran’s negotiating position has been that the West must ease sanctions up front as a first step before anything else can happen.

What the Iranian president can offer is advice and attempt to nudge views in his direction.

Rowhani has been at the negotiating table before as Iran’s envoy beginning in 2003, just a year after Tehran’s revived nuclear efforts were revealed. Rowhani has been highly critical of Iran’s leadership for not showing more nimble tactics and allowing the economic squeeze to become so painful, with inflation now galloping at about 30 percent and critical oil exports cut in half.

In some ways, Rowhani’s rise may owe a bit to the sanctions and the predictions by Washington that they will embolden dissent. During the street celebrations for Rowhani on Saturday, there were many chants about Iran’s sinking economy and international isolation peppered among the calls for greater freedoms and political rights.

Rowhani knew where to strike in the campaign, constantly returning to economic woes. “Which family today doesn’t have someone who isn’t unemployed?” he asked. “If the administration had a plan, couldn’t this be solved?”

The pro-reform Etemad daily carried a front page image of the smiling cleric Rowhani flashing a V-for-victory sign: “A salute to Iran and to the sheik of hope.”

“Rowhani may face problems like sanctions, inflation and so,” said Mirzababa Motaharinejad, a member of the pro-reform Mardomslari party. “But authorities will cooperate with him.”

Up to a point. Iran has been here before and it didn’t end well for reformists.

In 2001, reformist Mohammad Khatami steamrolled into his second term as president. The next four years were a stalemate as hard-liners allied with Khamenei blocked attempts at political reforms in parliament. Authorities gave up some ground on social freedoms — letting women’s head scarves slide back and permitting more Western films and music — but there also were pinpoint strikes on dissent with arrests and newspaper closures. The establishment eventually

Now, the Revolutionary Guard and its nationwide paramilitary force, the Basij, are far stronger and more deeply integrated into every level of society, including monitoring social media.

It’s unlikely Rowhani will push too hard anyway. He is moderate in the mold of his political patron, former President Akbar Heshami Rafsanjani, who wages selective battles against the Islamic establishment but manages to stay an insider with a post within the ruling hierarchy. Rowhani’s candidacy was something of a consolation prize after the ruling clerics barred Rafsanjani from running. Rafsanjani will now play the role of shadow president, advising from the wings.

A test ahead could be whether Rowhani attempts to win the release of the candidates from the disputed 2009 election, Green Movement leader Mir Hossein Mousavi and former parliament speaker Mahdi Karroubi, who have been house arrest since early 2011. Chants at his rallies and victory celebrations urged for their freedom.

“There is a lot to be cautious about. Rowhani is part of the system. He has served in some of the highest positions in Iran, including within the military and national security establishment,” said Alireza Nader, senior policy analyst at the Rand Corp., a Washington-based think tank that receives U.S. funding. “He is not a reformist. He appears as an alternative candidate when compared to people like former President Mahmoud Ahmadinejad. This is a low bar.”