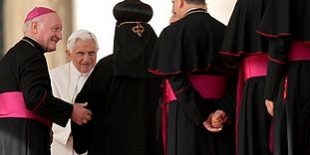 In an article published in a local Israeli newspaper around the time of Israel’s 65th Independence Day, Rabbi Moshe Chaim Har-Noy puzzled over the fact that there are still so many Bible-believing Jews who refuse to celebrate the Jewish state’s modern rebirth.

Soloveitchik, a Boston-based rabbinical leader and one of the msot renowned of modern Jewish philosophers, delivered a powerful public address in 1956 on the occasion of Israel’s eighth Independence Day. In it, Soloveitchik argued that “all the claims of Christian theologians that God deprived the Jewish people of its rights in the land of Israel, and that all the biblical promises regarding Zion and Jerusalem refer, in an allegorical sense, to Christianity and the Christian Church, have been publicly refuted by the establishment of the State of Israel and have been exposed as falsehoods, lacking all validity.”

Har-Noy noted that for centuries the Christian Church used the fact that the Jewish people had been deprived of their nation and could find no rest in their exile as evidence that God had made Christians the new “Chosen People.”

“Then came the Holocaust and the torturous destruction of a third of our people. For the Christians this was incontrovertible evidence that the previous Chosen People would never rise again,” the rabbi continued. “And then the State of Israel was established!”

For this reason, Har-Noy asserted, the rebirth of Israel was as much a deep spiritual event as it was the establishment of a safe harbor for Jews. “Independence Day is first and foremost a celebration of the rise of the Jewish people from the dust, as the verse says: ‘Rise from the dust, dress in your garments of splendor, my people,'” the rabbi said, referencing the Lekhah Dodi (Come My Beloved), a liturgical song that is part of the Jewish service welcoming the weekly Sabbath.

With all that it means, how can there be Jews who will recite prayers and scriptures, but not mark the modern holy day that is Israel’s prophesied rebirth? “Certainly there is much left to do and much to improve, and that is our mission,” concluded the rabbi. “We must take what the previous generations have imparted to us and improve this wonderful gift called the State of Israel.”