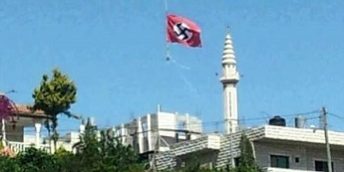 Residents of the Arab town of Beit Omar between Jerusalem and Hebron strung up a large Nazi flag adjacent to their local mosque on Monday in a clear message to the Jews living nearby.

A resident of the nearby Jewish communities of the Etzion Bloc said the incident was very jarring. “I felt we were going back 75 years, losing our hold on the land,” he told the Tazpit News Agency. “The Arabs no longer feel the need to hide their murderous intentions, announcing out loud that they wish to annihilate us.”

The Israeli army was notified about the Nazi flag, and sent in a team to remove it.

The Nazis and Adolf Hitler have long been idolized in much of Palestinian society. Hitler’s “Mein Kampf” remains one of the 10 bestselling books in the Palestinian Authority-controlled territories today, and has a local distributor.

During World War II, the Palestinian leader in the Middle East, Haj Amin al-Husseini, was a close confidante of Hitler, and actively recruited fellow Muslims to the Nazi cause.