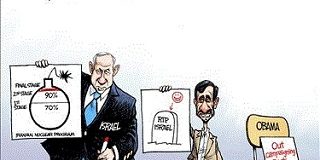 In one the most important and overlooked articles written about the Iranian nuclear threat, the Jerusalem Post’s Gil Hoffman recently qualified statements made by former Military Intelligence chief Maj.-Gen. (res.) Amos Yadlin that Tehran had crossed the “red line” delineated by Prime Minister Binyamin Netanyahu in his speech to the UN General Assembly in September.

Speaking on the sidelines of the Jerusalem Post conference in New York, Yadlin explained to reporters that the perception that Iran had diverted to civilian purposes a significant portion of its uranium enriched to 20% was partially flawed. Yadlin clarified that while Iran had indeed converted some of this stockpile into nuclear fuel rods—generally used in nuclear reactors to produce nuclear energy—the majority was in fact made into oxidized uranium, or yellowcake, which can be readily transformed into fissile material.

“Within a week, could be turned into nuclear material for a bomb,” Yadlin is on record as saying.

To fully comprehend the significance of Yadlin’s assertion, some context, while dense, is necessary.

In August 2012, the International Atomic Energy Agency (IAEA) reported that Iran had, since Tehran began refining uranium to this concentration in 2010, produced nearly 190 kilograms of uranium enriched to 20%. At the time, there was widespread speculation of an imminent Israeli attack on Iran; talk of which infuriated Netanyahu to such an extent that he accused the media of perpetrating a “worldwide scandal” in order to “prevent Israel from independent action.”

Weeks later, Netanyahu appeared before the UNGA to delineate his “red line” on Iran’s nuclear progress, his now-infamous caricature of a bomb in hand.

One month later, then-defense minister Ehud Barak gave an interview to the British Telegraph, in which he confirmed that Iran had delayed the “moment of truth” by converting approximately forty percent, or 70 kg, of its 190 kg stockpile of higher-grade uranium to other forms; thereby leaving Tehran with 120 kg of the substance, well below the 250 kg threshold required to build a nuclear bomb.

By February, however, the IAEA disclosed that Iran’s total production of 20% enriched uranium had reached 280 kilograms, an addition of 90 kg in the preceding six months. Its stockpile stood, at that point, at 170 kg (up from 120 kg in August); meaning that another 40 kg had been diverted towards other purposes.

Yadlin’s “blockbuster” was to reveal that, contrary to popular belief, only 30 kg of this had been transformed into fuel rods, whereas 80 kg was turned into yellowcake, which, as Yadlin cautioned, can be converted expeditiously into bomb-grade material. He therefore concluded that Iran had crossed Netanyahu’s red line, as the 80 kg of yellowcake in question, when added to Iran’s stockpile (as of February) of 170 kg of 20% enriched uranium, exceeds Netanyahu’s 250 kg threshold; or, in Gil Hoffman’s words, what we have is “a crossed red line, an undermined prime minister and a serious problem.”

Ironically, despite the enormous publicity generated by Yadlin’s comments, the fact of the matter is that this information was already outlined by the IAEA in its February report: “28.3 kg of UF6 enriched up to 20% U-235 were fed into the conversion process at FPFP ,” while the rest was transformed into U3O8, a form of yellowcake.

Given these facts, the question arises: Has Iran crossed Netanyahu’s “red line”?

In his speech to the UNGA, Netanyahu specifically stated that “a red line must be drawn, first and foremost, in one vital part of program—on Iran’s efforts to enrich uranium.” Netanyahu reasoned that “the only way that you can credibly prevent Iran from developing a nuclear weapon is to prevent Iran from amassing enough enriched uranium for a bomb,” since Tehran could covertly produce other components of a nuclear weapon, such as a nuclear detonator, for example, with relative ease and without the knowledge of the international community.

Netanyahu thus asserted that “a red line should be drawn before Iran completes the second stage of nuclear enrichment necessary to make a bomb.” Specifically, “before Iran gets to a point where it’s a few months away or a few weeks away from amassing enough enriched uranium to make a nuclear weapon.”

While debatable, it seems, then, that Iran has indeed technically crossed Netanyahu’s limit, as the country has to date manufactured more uranium enriched to 20% (280 kg+) than is required to build a nuclear weapon (even though its current stockpile allegedly remains below the 250 kg threshold required to build a nuke). Most importantly, as Yadlin noted, Iran has shortened the time required for it to reach “breakout” capacity to mere days, a significantly shorter timeframe than the “few months” or “few weeks” outlined by Netanyahu in September.

Iran is thus on the brink of achieving nuclear weapons capability, having reached the stage whereby it can decide at any moment to make a week-long dash towards a point of no return; an interval which is, “red lines” aside, too close for comfort.

In his interview last October, Barak claimed that Iran had rolled back its nuclear progress by “eight to ten months,” and stressed that Tehran would likely reach the “zone of immunity,” depriving Israel of its military option, by the “spring or early summer.” This prediction coincides with Yadlin’s recent assertion that the Islamic Republic could reach nuclear breakout capacity as early as June.

Likewise, Netanyahu stated in his speech to the UNGA that Iran will have produced enough higher-grade enriched uranium for its first bomb “by next spring, at most by next summer.” This reality, Netanyahu said, precipitated his delineation of limits on Iran’s nuclear program, as “red lines don’t lead to war, red lines prevent war.”

The evidence suggests that we’ll soon find out if he’s right.

The author recently made aliya from Canada.