The depths of Jew-hatred 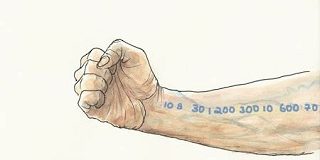 “Who has made us Jews different from all other people?  Who has allowed us to suffer so terribly up until now?  It is G-d who has made us as we are, but it will be God, too, who will raise us up again.  Who knows it might even be our religion from which the world and all peoples learn good, and for that reason and only that reason do we suffer.  We can never become just Netherlanders, or just English or representatives of any country for that matter.  We will always remain Jews.” –    From the diary of Anne Frank, April 11, 1944

The month of April is always a difficult period for many of us in Israel, whether it be Holocaust Memorial Day or the I.D.F. Memorial Day. Dealing with death and bereavement of our children God forbid or our grandparents and extended family whom we have never met is a wrenching experience always leaving a sense of it being unfinished and perpetually out there even though we can’t touch it or tuck it neatly in a drawer. It’s always out there throughout the year with a focused intensity during these past weeks.

On Memorial Day for soldiers, I spend the day with the Guy family who live in a moshav called Nir Banim in Southern Israel. My buddy Jerry Wolf Hy”d, whom we called Tzvi his Hebrew name, was originally from Hollywood, Florida and was an adopted lone soldier by the Guy family. Both Jerry and I were serving in Lebanon at the time, Tzvi in a tank and I as a medical officer. On June 6, 1982 Tzvi was killed in action on the first day of the War of Lebanon. On the very same day, Shahar Guy Hy”d, the only son of the Guy family was also killed in action. Despite them being killed in action on the same day, notification of their deaths during the war came at an interval of 48 hours. So as we all meet, family and friends, we share with one another what has transpired over the past year and reminisce about Tzvi and Shahar. This year on Memorial Day a group of middle aged men whom we have never seen before, even though we have been attending this Memorial service for the past 32 years, appeared at the military cemetery to participate in the service. Afterwards they joined us at the Guy home. They introduced themselves as Tzvi’s former tank buddies who served in the same unit and participated in the attack when Tzvi was killed. They brought with them yellowed and battered photo albums with pictures of the war and the actual tank in which Tzvi was fighting in. They shared with us all sorts of facts and tidbits that we did not know. Someone asked why it took them 32 years to show up,  I quietly responded that till now they weren’t ready to come and face the family, only now  can they  burden the task of sharing what they know and meet the parents face to face. After 32 years, we were all thrust into a situation in which all of us relived those difficult days, reaffirming our collective sense of it being unfinished.

On Holocaust Memorial Day, I spend the day with my father who at 89 never misses an opportunity to take pleasure in the fact that he is still around despite all that he experience during the Holocaust. I usually begin the day by reviewing my mother’s personal papers from the year and a half she spent at the Theresienstadt concentration camp. When my mother was alive she spoke extensively about her experiences always remembering something new that she never mentioned or had forgotten. In her personal papers is the original Jewish star patch that she wore on her clothes, identity cards, currency that was in use in the camp, permits allowing movement from one side of the camp to the other, a whole potpourri of objects that bring alive the Holocaust and give a slight inkling of what my mother and millions of other Jews had to deal with day in and day out. Later in the day, I attend with my father the Holocaust ceremonies in Raanana were he lives. One of my children always accompany my father at this ceremony, this year Avraham, my second son, till recently an officer and commander in the Givati Reconnaissance Unit, joined us and so we stood alongside one another as the siren went off at the beginning of the ceremony, three generations of Jews stood firm and proud of being Jews, and proud of living in the State of Israel.

So what ties these two monumental days together, making all else seem trivial and mundane. The depth of Jew-hatred then and now are really two sides of the same coin. The old anti-Semitism in the form of Nazi ideology to be superseded by the Islamic hatred of Jews and Israel occupy the same linear space of history forever connected on to another. In the past, when the Nazi’s implemented the “Final Solution”, the world slowly learned that what was meant for the Jews was only the first act for a finale in which the free world would be the true objective. In the exact manner, the world is beginning albeit slowly to understand the true objectives of Islamic terror. What was perceived for decades as a Jewish problem and an Israeli problem is slowly being understood that again the Jews and Israel are only the first act for the horrific finale that Islamic terror seeks, this is the new anti-Semitism based on the very same depth of Jew-hatred that began with the Nazi’s in the 1920’s.

Israel Is Not an Apartheid State
June 9, 2022
A Hard Left Turn Against Israel in the U.S. Congress
June 3, 2022
Red Alert: Not just the rise, but the acceptance of antisemitism—what can we do about it?
May 18, 2022
Holocaust Remembrance Tour Captivates American Audiences and Hearts
May 3, 2022
Yom Hazikaron: Remembering Israel’s unknown fallen soldiers
May 3, 2022
Hitler the Jew: Racial Theory In Its Russian Interpretation, 2022
May 3, 2022