An Islamic Declaration of War on Christianity 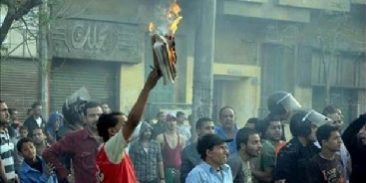 While it is easy to confuse the recent jihadi attack on Egypt’s St. Mark Cathedral in Cairo as just more of the usual, this attack has great symbolic significance, and in many ways bodes great evil for Egypt’s millions of Christians.

Consider some facts: St. Mark Cathedral—named after the author of the Gospel of the same name who brought Christianity to Egypt some 600 years before Amr bin al-As brought Islam by the sword—is not simply “just another” Coptic church to be attacked and/or set aflame by a Muslim mob (see my forthcoming book, Crucified Again: Exposing Islam’s New War on Christians, for a comprehensive idea of past and present Muslim attacks on Coptic churches). Instead, it is considered the most sacred building for millions of Christians around the world—above and beyond the many millions of Copts in and out of Egypt. As the only apostolic see in the entire continent of Africa, its significance and evangelizing mission extends to the whole continent, including nations such as Sudan, Ethiopia, Libya, Tunisia, Morocco, and Algeria, to name just a few. As an apostolic see—the actual seat of an apostle of Christ—the cathedral further possesses historical significance for Christianity in general.

In short, Muslim mobs—aided and abetted by the state of Egypt under Muslim Brotherhood tutelage—did not merely attack yet one more Coptic church, but rather committed an act of war against all Christianity. Such an open attack on a Christian center which holds symbolic and historic significance for all Christians—St. Mark, whose relics are in the cathedral and who authored one of the four Gospels of the Bible, belongs to all Christians not just Copts—was an open attack on a universally acknowledged Christian shrine. It was precisely these sorts of attacks on Eastern and Orthodox churches—including the destruction of the Church of the Resurrection in Jerusalem in 1009—that presaged the way for the crusades (back when Christianity was not utterly fragmented and disunited as it is today).

While one can only imagine how the world’s Muslims would react to a “Christian/Western” assault on their most sacred of shrines, “post-Christian” Western leaders, as usual, stand idly by (not unlike Egyptian state security, which stood idly by as the Muslim mob opened fire on the cathedral).

As for Egypt’s Copts, they certainly did rally to the defense of Egypt’s, if not the entire continent of Africa’s, most important cathedral—hence the draconian response from Egypt’s interior ministry (one eyewitness said security intentionally fired 40-50 gas bombs into the compound, knocking out many Christians, including several women and children). Just as Egyptian forces were wroth with Copts when they demonstrated against the ongoing attacks on their churches in Maspero in 2011—slaughtering over 20 Christians, including by intentionally running them over with armored-vehicles—it appears that Egyptian forces were quite irked with “dhimmi” Copts boldly defending their holiest site.

On the other hand, that Copts rallied to the defense of their cathedral—or, as Reuters characterized them, “an angry young fringe … of Christianity may also be turning to violence—has further validated the Western mainstream media narrative that Egypt’s Christian minority is somehow equally violent and responsible for the so-called “sectarian strife”—euphemism for Muslim persecution of Christians—plaguing Egypt.

The symbolical significance of this latest Muslim attack on Christianity was confirmed by several activists. For example, Coptic Solidarity President Adel Guindy said, “Attacking the seat of the Coptic Pope is unprecedented in the last two centuries. It was a deliberate and humiliating act demonstrating the growing Salafist-espoused culture of hate and aggressive behavior towards all non-Muslims. It amounts to a State crime.”

Even the Coptic Pope, who must always be diplomatic lest his comments exacerbate matters for his flock, did not equivocate the severity of this assault on Coptic Christianity’s most sacred spot—not to mention his primary residence. Among other things, Pope Tawadros said that President Muhammad Morsi had “promised to do everything to protect the cathedral but in reality we don’t see this…. We need action not only words… There is no action on the ground.” The Pope further confirmed that “This flagrant assault on a national symbol, the Egyptian church, has never been subjected to this in 2,000 years.”

The Pope’s comment “we need action not only words” was in response to President Morsi’s declaration that “I consider any attack on the cathedral an attack against myself”—a declaration he made even as Egyptian state security were firing tear gas canisters into the cathedral compound and standing by watching as Muslims also opened fire on the cathedral and hurled stones and Molotov cocktails, all of which was captured by photos. (Even so, and as usual, the only people to be arrested in connection with this latest assault on Egypt’s most important cathedral were Copts themselves.)

Instead of words—which, from Islamists, are absolutely worthless—what Morsi needs to address is the fact that the most unprecedented and symbolically lethal attack on a Christian place of worship in post “Arab Spring” Egypt took place right under his and the Muslim Brotherhood’s authority (under Hosni Mubarak, “not so much as a pebble”—as one activist put it—was thrown at the St. Mark Cathedral, a national landmark).

This of course is consistent with the fact that, unlike all former Egyptian presidents, who were all Muslim, Islamist President Morsi is the first president to refuse to enter a church—whether during the ceremonious installation of the nation’s new pope or whether during Coptic Christmas ceremonies. Could this be because the pious Morsi believes that a Christian church is like “a nightclub, a gambling casino” as a prominent Egyptian fatwa council declared? Could it be that he, like other popular Muslim leaders, simply hates and is disgusted by Christians?

At any rate, here is the Muslim world’s latest, most flagrant, assault on Christianity, even as Western leadership yawns—that is, when it’s not actively enabling such anti-Christian animus through its wholesale support for the “Arab Spring.”