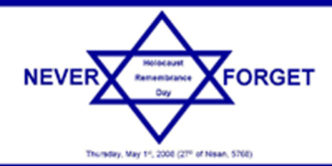 Yom HaShoah ve HaGvura 28th Nissan, 5773 – Day of Remembrance for the Holocaust and its Heroism.

The Nazis yelled “Go back to Jerusalem” to us – now their heirs yell “Go back to Europe”. Never Again becomes little more than a knee-jerk reaction, because it is again, it is happening again and an entire nation is again threatening to murder 6 million Jews just because they are Jews. They have followed the same pattern of dehumanisation through cartoons and schoolbooks; they don’t have black shirts or brown shirts and they are Teutonic in their precision but they have learned a great deal from the perpetrators of the Holocaust that they so vehemently deny.

There are two videos of the British liberation of the Bergen- Belsen extermination camp, both of which express the determined optimism of those for whom there was no hope. There are two versions of this video – one is truthful and one is truthful without the full truth. You choose what you want to see. The whole heinous truth http://www.youtube.com/watch?v=iHg9vcRM_00 the kinder truth without the pictures http://www.youtube.com/watch?v=syUSmEbGLs4

The British troops who liberated Bergen Belsen were accompanied by a Rabbi, Chaplain T. L. Hardman who led the Friday evening prayers – as the BBC reporter said “The first time that Jewish prayers had been freely held on German soil, without fear, for 10 years” He also said “This is the most terrible day of my life” when he say the remnants of humanity. They were without hope yet they sang “Hatikva” the Hope, and dreamed of freedom in their own land. One of those liberated that day was Malka, little Malka, barely alive yet strong enough to pull another child from the piles of dead and saved her life. Both girls came to Israel. Malka married and started a family. Today her son is leading the March of the Living as the Commander in Chief of the IDF, Benny Gantz. Miracles do happen especially here. http://www.timesofisrael.com/chief-of-staff-meets-the-woman-his-mother-saved-in-wwii/

Those who live in the USA, UK, Europe, Canada, Australia and South America and truly believe that “It won’t happen here” are living in a dream world. It is happening in a town near you right now. Some countries it is overt and some countries it is tacit but believe you me – it exists. There are those leaders who speak out very very strongly, such as Canada’s Prime Minister Harper, but most pay verbal homage to “the right thing” without doing anything tangible. All we can do is ensure our children have a strong sense of identity. They do not need to be religious, but they need to know what being Jewish means other than wanting to be a doctor, lawyer, architect or professor. Talking of which, I was given a huge boost of hope this week. Let me explain.

It may seem inappropriate to talk about a celebration but I felt that their responses were so important on this day. It is the basis of our identity, a lesson learned by two generations of Jews who did not know a world without the security of State of Israel. Two generations who cannot imagine not being protected. Two generations who developed their strength of identity because this country exists and is strong, ever stronger.

President Peres expressed it with his usual deep eloquence as he thanked two world leaders for coming to the Holocaust Ceremony at Yad Vashem last night. Ex-PM Tony Blair and Canadian Foreign Minister John Baird, arrived specifically for the ceremony, bowed their heads as he spoke

“The Holocaust will not sink into the dark hole of history. It is here with us, burning, real.

It resonates as we step on the stones of the ghettos. It floats like a ghost in the barracks of the camps.

It cries from the prayer shawls, the hair, the shoes that we see with our own eyes. It whispers from the tears that dried before we said goodbye.

It is reflected in the photographs of the babies in their mothers’ arms. The noise of those murderous trains which have ceased, stills rings in our ears.

The smoke which has not faded as it drifted into the sky above.” ….

The Jewish people are a small nation in number but large in spirit. That spirit cannot be burned in the ovens. From the ashes of the Holocaust rose spiritual redemption and political rebirth. We rose and we built a state of our own.

We lost possessions, but retained our values.

We returned to our ancient homeland. We renewed our moral legacy.

We returned to independence.