The triumph of low expectations 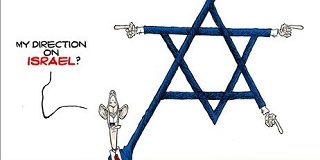 This past week, a friend caught me in shul and shared with me the following gem, “If you want to know how the Messiah will be welcomed in Israel, then this past week is a good indication.”

The welcome given to President Obama, very much in the tradition of Hollywood’s amazing ability to convey a prepared script, was very much a celebration of reiterating the impossible and expecting the improbable. During the visit, there wasn’t one Israeli button that Obama didn’t push during his speeches and throughout his entire visit: from Holocaust to liberation, from over numbered to victorious in battle, from Jewish indigenousness to start-up nation, with the goal of touching the hearts of the Israeli public. Obama’s rhetoric was powerful, eliciting from all sectors of the Israeli public undiminished support and winning the hearts and minds of many.

Many have said that what we saw is the real Obama, no masks and no makeup. Obama, “the Jewish President” as Peter Beinart described him in The Crisis of Zionism, whose formative years in public life were spent alongside liberal Zionist Jews who taught him of the Jewish battle for civil rights and of the Jewish belief in a just and enlightened Israel, came across as a decent human being, a real mensche. Yet his overall message which concluded the visit can be summed up by the following: I have come to save Israel from itself, and to do so, Israel must get rid of the settlers, return to the Green Line, and give the West Bank to the Palestinians.

The Liberal left has been telling itself this fairytale for the past 46 years. These disappointed believers know that it won’t happen, but they continue to insist that this is the only way to end the conflict. It’s a missed opportunity that Obama didn’t set things straight and spell out some truthisms.  Obama could have mentioned that American interests come first and that support for Israel in no way impedes America’s ability to become endeared to the Sunni Muslim world. Obama could have finally set the record straight concerning so much of what is accepted as gospel truth. To claim that an agreement is within reach just doesn’t hold water. Why not state once and for all the Palestinian Arabs have signed no less than six agreements under the auspices of past American presidents and they have not upheld a single one of these agreements? Or how about how the Palestinian Arabs rejected the more than generous so-called peace proposals put forward by the indicted former Prime Minister Ehud Olmert or even Ehud Barak? So rather than putting a dent in the global movements of anti-Semitism who masquerade behind anti-Israel and anti-Zionist activities, Obama could have stated once and for all that Israel’s legitimate claims to remain in Judea and Samaria are no less valid than the demands of the Arabs by simply declaring that they should be defined as a disputed territory rather than as occupied territory. He simply does not want to be involved anymore.

Obama is well aware that it is important today for American interests to create a new axis of stable Sunni Arab countries and Israel to counter the Iranian led radical Shiite axis. This axis includes the Gulf states, Turkey, Jordan, Egypt, and Israel. The Palestinian Arabs are conspicuously not on this list only because they have lost all strategic importance and support from the Arab world. As far as reviving the peace talks with the Palestinian Arab Authority, Obama’s rhetorical brilliance during the visit is likely to produce no results—he knows it, the Arabs know it, and Israel knows it. Why not come straight out and say it out loud, letting Israel clearly off the hook? Keeping this in mind, how are we to understand the significance of all that has transpired as a result of Obama’s visit?

Civilization failure, as we have witnessed throughout the Middle East, can’t be fixed. It can only be contained, so as to limit the risk to America and American interests. Since the Arab Spring erupted over two years ago and in response to the changes sweeping the Arab World, much has been written about the irrelevancy of the two-state solution and the proven deceptiveness of “land for peace.” Only now, in response to Obama’s visit, we can clearly conclude that the Palestinian Arab issue is no longer on the agenda as far as American interests are concerned.

The first Obama Presidency has been highlighted by little if any successes. Whether you examine the state of healthcare in America as a result of Obamacare, or check out the job market, and so forth, Obama has little to show for all his efforts other than his reelection—which was, I think, his only real accomplishment after four years in office. The Obama Presidency has been very much an administration of passiveness—do the minimum, avoid confrontation, and substitute rhetorical brilliance for real attainable goals. The common thread that ties together Obama’s domestic agenda and his foreign policy goals in the coming years will be an accumulation of low expectations and more hours on the golf course.