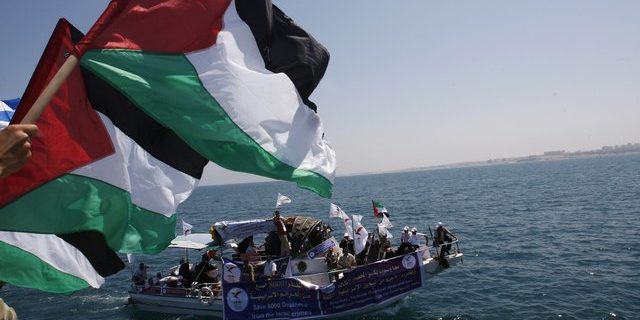 Barack Obama brought enough Chicago-style community organizing to Israel that Benjamin Netanyahu knew what he would have to do. If he hoped to keep the tepid support of his country’s essential but icy ally, Israel’s prime minister would have to do what he’d spent nearly three years steadfastly refusing to do. Netanyahu would have to apologize to a state sponsor of terrorism that openly, notoriously, and enthusiastically supports Hamas.

He would have to apologize to Turkey — to its prime minister, Recep Tayyip Erdogan, Obama’s close friend and confidant.

He would have to apologize for military action taken in his country’s righteous defense against violent jihadists with close connections to Erdogan’s ruling party and, seamlessly, to the Muslim Brotherhood, as well as al-Qaeda.

As I recount in Spring Fever: The Illusion of Islamic Democracy, the violent jihadists in question were from the grotesquely named “Humanitarian Relief Foundation” or IHH (İnsan Hak ve Hürriyetleri ve İnsani Yardım Vakfı). The IHH is an Islamic “charity” based and basted in the Islamic supremacism of Erdogan’s Turkey. It is part of the Union of Good (sometimes referred to as the “Union for Good”), a jihadist umbrella enterprise that was designated by the United States government, during the Bush administration, as an international terrorist organization. Under the direction of a top Muslim Brotherhood honcho, Sheikh Yusuf al-Qaradawi, the Union of Good’s main purpose is to transfer funds to Hamas, another designated terrorist organization. Besides being the Brotherhood’s Palestinian branch, Hamas boasts Turkey, our NATO “ally,” as its chief benefactor.

In late May 2010, IHH terrorists attempted to break Israel’s lawful naval blockade of the Gaza Strip. The blockade is necessary to stem the flow of weapons to Hamas, Gaza’s rulers having responded to Israel’s painful peace offering — its withdrawal in 2005 from territory it had captured in a war of Arab aggression — by stepping up their terror campaign against the Jewish state. In seeking to break the blockade, an act of war, the IHH was willfully abetted by the Turkish government.

Israeli officials had pleaded with their Turkish counterparts to prevent the terrorists from embarking on their “peace flotilla.” Members of Erdogan’s government and party not only turned a deaf ear; they sold the jihadists the offending vessel, the Mavi Marmara. They allowed the jihadists — armed with flares, night-vision goggles, 150 bulletproof vests, 200 gas masks, several dozen slingshots, 200 knives, 20 axes, 50 wooden clubs, 100 assorted iron bars, etc. — to board the ship without inspection. When the inevitable high-seas confrontation occurred, the Israeli Defense Forces tried to subdue the terrorists with paintball guns. The IDF resorted to lethal force only after being premeditatedly and savagely attacked — with several of its sailors seriously wounded. In that response, nine of the terrorists were killed.

Squeezed by Obama, Netanyahu would have to apologize for the killing of those terrorists.

More often than not these last five years, Israel’s prime minister has felt President Obama’s heel on the back of his neck. In stark contrast, Turkey’s prime minister has enjoyed Obama’s warm embrace. In Ankara, Erdogan hosts the leaders of Hamas and Hezbollah as foreign dignitaries. He accuses Israel of turning Gaza into a “concentration camp.” Only days before Netanyahu’s coerced apology, Erdogan — whose history of anti-Semitism is infamous — publicly pronounced that Zionism is a “crime against humanity.”

This heinous accusation, “crime against humanity,” has become something of a verbal tic with Erdogan. He cavalierly applies it to Israel’s self-defense from thousands of jihadist rockets fired into its territory, and to the suggestion by European governments that the millions of Muslims who’ve immigrated to the West ought to assimilate into their new societies. Nevertheless, Obama openly regards Erdogan as one of his most trusted partners on the world stage. “The bottom line is that we find ourselves in frequent agreement upon a wide range of issues,” said Obama of Erdogan in March 2012, upon seeking him out at a South Korea summit for advice on the crisis in Syria, the tumult in Egypt, the nukes in Iran — even the challenges of raising daughters.

With Obama on the phone egging him on, Netanyahu abased himself. Not only did he apologize to Turkey, he further capitulated to Erdogan’s demand that Israel pay compensation to the Mavi Marmara “victims.” After the apology, Erdogan briefed his Hamas confederates and announced he would be visiting them in Gaza next month. Predictably, he has since announced that Netanyahu’s humiliating act of contrition will not be sufficient to restore diplomatic relations between the two nations. Just as predictably, other Islamic states are now preparing demands for apologies and compensation for sundry exercises of Israeli self-defense against jihadist terror.

There has been no shortage of speculation about why Israel caved. Perhaps it was anxiety over Iranian nukes and Syrian tumult — the hope that rapprochement with Turkey would give Washington more maneuvering room to protect Israel’s interests. Perhaps there were financial considerations, including billions potentially to be made in the exportation of natural gas. None of these explanations is very satisfying. But that is beside the point. For Americans, what matters is not what this episode says about shifts in Israeli policy. It is the sea-change in U.S. counterterrorism that most concerns us.

We now know that Hamas has won.

In 2011, Erdogan made a startling pronouncement on Charlie Rose’s PBS program:

Really? Is this what we now mean by regular politics: In the 1987 charter by which it proclaimed its existence, Hamas explained that it formed in order to “join its hands with those of all jihad fighters for the purpose of liberating Palestine.” Clarifying that Hamas is “one of the wings of the Muslim Brothers . . . the Muslim Brotherhood Movement … the largest Islamic movement in the modern era,” the charter elaborates:

In its 25 years, Hamas has made good on its promise to kill. Yet Erdogan has been telling Obama since early 2009 that the United States must “redefine” what it means by “terror and terrorist organizations.” It is increasingly obvious that portraying Hamas as a “political party” and a “resistance movement,” rather than a terrorist organization, is one among the “wide range of issues” on which the president finds himself in agreement with the Turkish prime minister.

Yes, nominally, it is still a crime in the United States to provide material support to Hamas. But these days you have a better chance of being prosecuted under those immigration statutes the administration declines to enforce.

Hamas prosecutions went out with the 2008 Holy Land Foundation trial. Since then, the investigation of outfits proved by the Bush Justice Department to be cogs in the Muslim Brotherhood conspiracy to fund and otherwise encourage Hamas’s jihad against Israel have been dropped. Worse, some of those outfits, such as the Islamic Society of North America, are regular guests at the Obama White House. They are consulted in the formulation of Obama foreign policy, which — lo and behold — just happens to favor lavish financial and military support for the Muslim Brotherhood regime in Egypt. As for Obama national-security policy, Islamic-supremacists have been invited to censor the materials used to train our law-enforcement and intelligence agents.

Realistically, how could anyone expect the Obama Justice Department to prosecute the financial support of Hamas when the Obama administration is actively engaged in the financial support of Hamas — sluicing hundreds of millions of dollars in aid to Gaza, fully aware that it is under Hamas’s totalitarian control. In this, too, Obama is in concord with Erdogan, whose regime has similarly backed Hamas with hundreds of millions of dollars — news that comes to us courtesy of Turkey’s grateful friends at the Union of Good.

Until 2009, U.S. policy was straightforward: Hamas was a terrorist organization and America would not deal with it unless and until it acknowledged Israel’s right to exist and convincingly renounced violence. All that has changed, though. Under Obama’s governance, Islamic-supremacists are bankrolled even as they act on their pledge to destroy Israel. Israel, in turn, is expected to apologize.

Our military’s killing of Osama bin Laden, complemented by the controversial drone campaign, has given President Obama cover. The occasional terrorist is taken out, the administration beats its chest, and few notice that al-Qaeda is resurgent, that the administration spends far more time appeasing Islamists than killing terrorists, and that Hamas has won.

Welcome to the next four years.