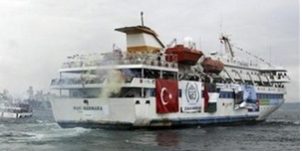 The last thing U.S. President Barack Obama did before leaving Israel on Friday was to make Prime Minister Benjamin Netanyahu phone Turkish Prime Minister Recep Tayyip Erdoğan to apologize for the events of May 30, 2010 — the day that a Turkish flotilla set out to breach the naval blockade on the Gaza Strip.

Passengers on one of the ships — the Mavi Marmara — violently attacked Israeli commandos who had been dispatched to prevent it from reaching its destination. Because the mission, which was sponsored by the Humanitarian Relief Foundation (a radical Turkish-Islamist nongovernmental organization with ties to terrorist groups), was ostensibly a peaceful one, the Israeli soldiers were armed mainly with paintball guns. The “peace activists,” on the other hand, were prepared with metal pipes, knives and other weapons, which they used to beat the soldiers to a bloody pulp before throwing them overboard. By the end of the clashes, nine activists were dead, and several Israeli soldiers were seriously wounded.

Since then, the Turkish government has tried and convicted Israeli officers in absentia; demanded that the families of those killed on the ship be compensated; severed diplomatic ties with Israel; denounced Israel as a racist entity; and claimed that it would continue to try to break the blockade on Gaza.

None of this should have come as a surprise. Since his election in 2003, Erdoğan has been shifting Turkey away from the West and into the bosom of radical Islam. This has not made a dent in the stubborn adherence to the belief in Washington that he remains a trusted American ally. Though it is true that Erdoğan opposes the mullah-led regime in Iran and Assad’s rule in Syria, this is solely because he has his own hegemonic ambitions in the region, which are neither peaceful nor democratic.

Unlike Obama, Netanyahu actually grasps this fact. He also knows that Israel has absolutely nothing to apologize for — other than being under-prepared for the onslaught that greeted the commandos. Furthermore, Netanyahu actually has made overtures to Erdoğan, expressing sorrow for the tragic loss of lives — overtures that Erdoğan has repeatedly rejected.

So why, after three years of standing his ground, would Netanyahu suddenly agree to an about-face on Obama’s cellphone? And why would newly instated Defense Minister Moshe (Bogie) Ya’alon — never known as a dove — support his having done so?

The explanation given by Netanyahu is that the Syrian civil war is bubbling to boiling point, which makes Israeli-Turkish cooperation a necessity.

Pundits have gone a step further, positing that Obama exacted the apology to Erdoğan from Netanyahu in exchange for giving Israel the green light to attack Iran’s nuclear facilities. And since any such operation would require Turkish permission to fly over its airspace, Netanyahu had better appease Erdoğan as soon as possible.

Given Obama’s assertion that it is still possible to engage in fruitful negotiations with Tehran, it is highly doubtful that he approved a military strike. But the point is moot at the moment anyway, since Erdoğan didn’t really accept Netanyahu’s apology. Instead, he upped his demands. He also proceeded to capitalize on the phone call, boasting to his public that he had brought the Israeli prime minister to his knees.

Now, he is going for Israel’s jugular by calling the continued Gaza blockade a deal breaker. You see, Erdoğan may not be pleased at the prospect of an even more powerful Iran, but he has no problem helping its proxy, Hamas.

Nevertheless, liaisons are underway to determine how many tens of millions of dollars Israel will pay in compensation to the families of the dead activists, and to what extent it will ease the blockade — thereby handing both Erdoğan and Hamas “Obama-brokered” victories.

In other words, rather than renewing ties with Israel to placate America and tackle the issues of Syria and Iran, Turkey’s stated aim is to get Israel to acknowledge moral, financial, and political blame for the flotilla incident, while fighting on behalf of the Palestinians “to end Israeli occupation.”

We should thus stop the wishful speculation about some secret pact between Obama and Netanyahu, and ponder the situation as we actually know it, by asking a number of relevant questions.

First, if it is in Turkey’s interest to fend off hostile forces in its vicinity, why does Erdoğan need to be bribed into complying with the endeavor?

Second, the U.S.-Turkish alliance is so crucial, why didn’t Obama demand that Erdoğan immediately restore relations with Israel — and remind him that the deaths on the Mavi Marmara were Turkey’s fault?

Third, why is it Jerusalem that so mourns the divorce from Ankara, when it is Turkey that has lost billions in Israeli tourist dollars, and not the other way around?

The answers lie in the inherent imbalance that exists between democratic countries and the despotic, often diabolical, regimes with which they try to reason. One could argue that Israel is at a particular disadvantage on this score, since its diplomatic playing field has become even less level than its battlefield. But the United States is supposed to be the leader of the free world, with international leverage as mighty as its military is fierce.

Obama is by no means the only American president to have treated this awesome responsibility more as a curse than a calling. But he may end up being the one under whose watch the word “superpower” no longer applies.

Erdoğan and his ilk are counting on it.

Ruthie Blum is the author of “To Hell in a Handbasket: Carter, Obama, and the ‘Arab Spring.’”